HAMPDEN hero Fraser Forster emerged as Celtic’s giant as they won their TENTH successive domestic honour with this tense, hard-fought victory in the wind and the rain at Hampden this afternoon.

The Hoops keeper simply refused to concede a goal with a series of mesmerising saves including a dramatic penalty-kick stop from Alfredo Morelos as Neil Lennon’s brave 10 men hung on grimly for a historic and gallant triumph.

It was an astonishing one-man show from the on-loan Southampton shotstopper as he defied the opposition with save after brilliant save. The Celtic fans, rightly, will encourage the club’s hierarchy to break the bank to make sure their favourite remains at Parkhead when his contract expires at the end of the season.

And while the Englishman was putting up the shutters at one end, the Hoops got the goal that mattered on the hour-mark after they had been battered by frantic opponents searching desperately for silverware success.

They have been forced to be bit-part players and look on in the past four seasons as Celtic have dominated Scottish soccer.

There was a massive shift in power in this encounter when Odsonne Edouard replaced the toiling Lewis Morgan in the 59th minute and only moments later was fouled on the left touchline by the clumsy Connor Goldson. 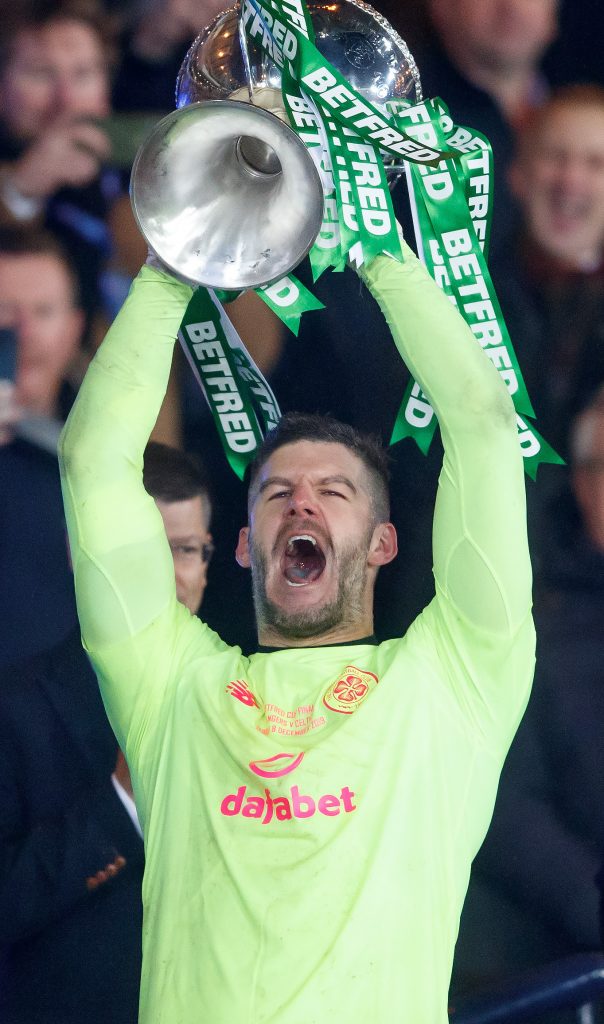 Ryan Christie flighted in a perfect ball from the free-kick award and it swept beyond everyone in the centre of the goal to land at the feet of Christopher Jullien who instinctively thrust out a foot and divetred an effort wide of the stranded Allan McGregor from eight yards.

Half of Hampden erupted with joy as the ball nestled in the net and a bouncing Lennon jumped with delight on the touchline.

Three minutes later, the game almost turned on its head. A ball broke to the theatrical Morelos in the box and, following the merest of touches from Jeremie Frimpong, went down in search of a penalty-kick. Referee Willie Collum pointed to the spot and worse was to follow with the impressive 18-year-old Dutchman being shown the red card.

The cheers from one end of the ground were stifled, though, when Morelos took the kick and Forster threw himself to the right to beat the ball to safety.

It was a surreal moment in the Hoops’ history of big games at the national stadium.

SPOT ON…Fraser Forster dives to his right to save Alfredo Morelos’ penalty-kick.

With the banishment of Frimpong, Lennon was forced to make changes and took off James Forrest and put on Nir Bitton to play alongside Jullien in the heart of the rearguard and shift Kristoffer Ajer to the No.2 slot.

Six minutes were added as the Ibrox side tried in vain to get back into the game.

Alas, Mikey Johnston missed a superb opportunity to hit a second for Celtic when he was released by Edouard in the 69th minute.

He was clean through on McGregor and it looked as though the net must bulge with No.2, but he inexplicably knocked the ball wide of the upright.

There was little argument Celtic had Forster to thank for going in goalless at the interval. The towering keeper made four outstanding stops to prevent the opposition turning their superiority into goals.

The Hoops were lost in a maze of mistakes as they just could not get their passing game going against Steven Gerrard’s Ibrox outfit who were snapping into challenges all over the pitch. The action was passing Ryan Christie by while Mohamed Elyounoussi struggled to make any sort of impact and was guilty on a few occasions of surrendering possession far too easily.

With talisman Edouard on the substitutes’ bench, Morgan was again asked to lead the line, but his performance brought back dreadful memories of Mikey Johnston being left up on his own at Ibrox twice last season and on both occasions the champions lost without threatening McGregor.

So, with Ajer and Jullien with nothing to hit up front and giving the ball away too easily with wayward forward passes, Lennon’s men were penned in for most of the opening 45 minutes. 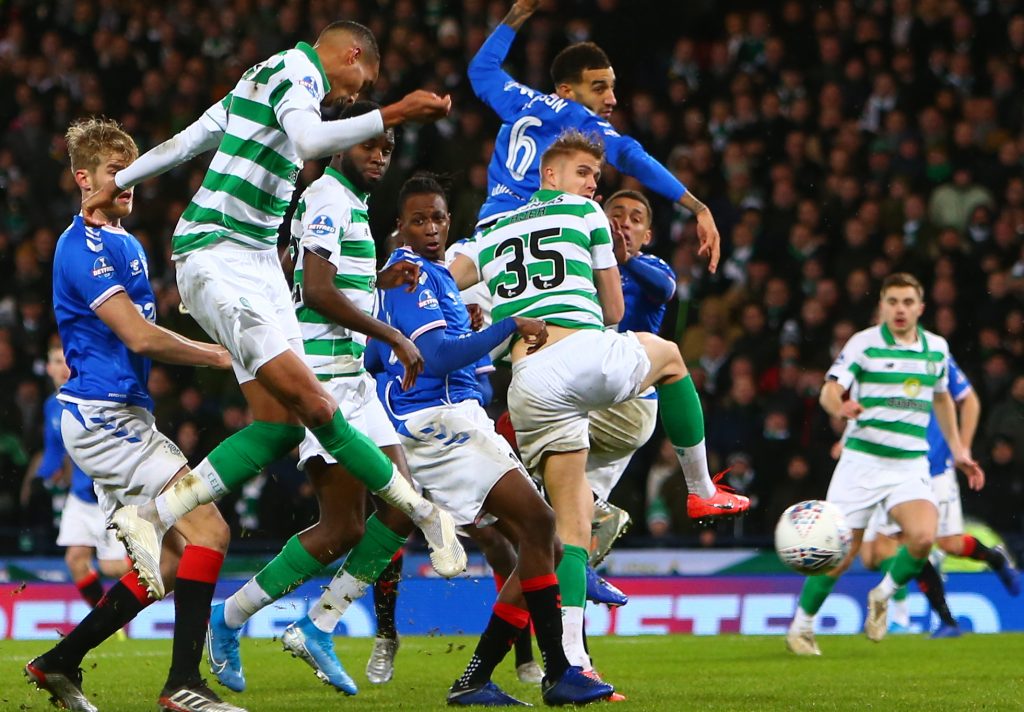 And that’s where Forster showed his ability to deny the opposition with some breathtaking saves.

The first came in the 14th minute, when Ryan Kent set up Ryan Jack for a shot 25 yards out. The midfielder, afforded time and space, walloped in a vicious dipping drive, but the keeper took off on an athletic swoop to his left to get a hand to the ball to block it and repel the danger.

Five minutes later, Morelos tried a snap shot from eight yards that flew through the legs of Frimpong and the big Englishman must have seen it late. However, he managed to block the ball and, as it squirmed under his body, Jonny Hayes arrived in the nick of time to sweep in past the post for yet another corner for the Ibrox side. 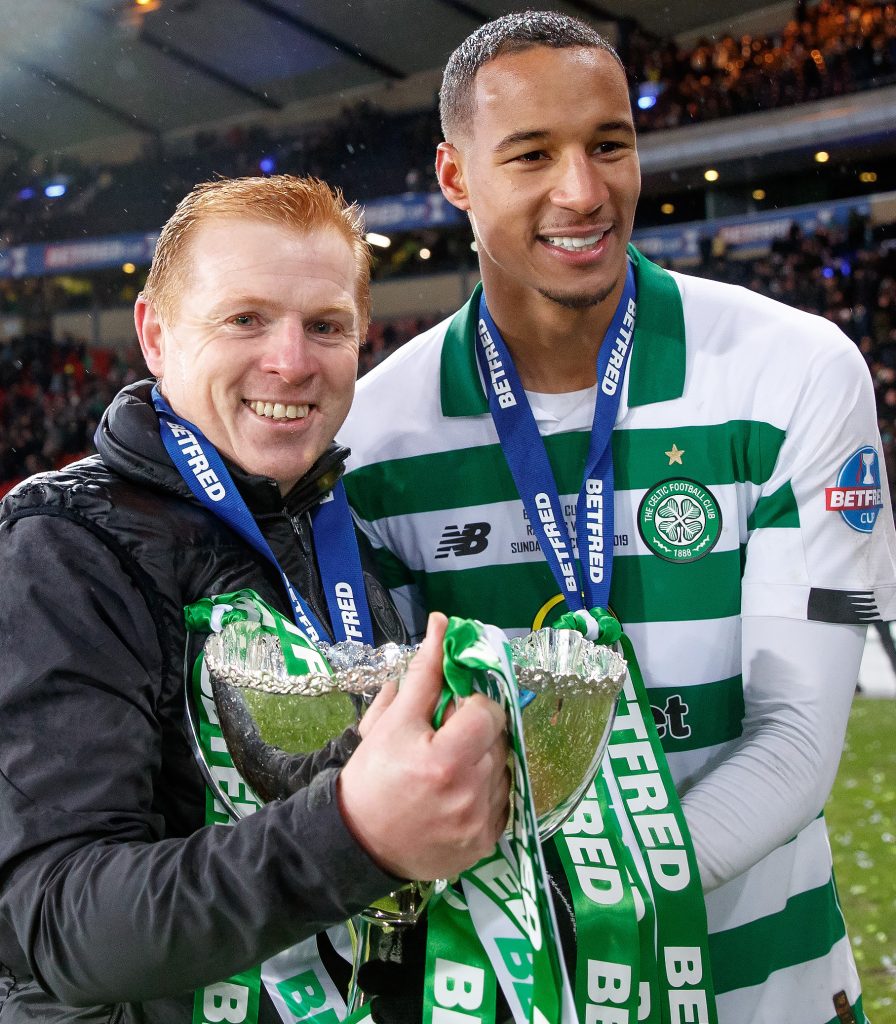 WINNING SMILES…Neil Lennon with goalscorer Christopher Jullien at the end of a dramatic encounter.

In the 23rd minute, it was Forster to the rescue again as he dived low to his left to hold a shot from Morelos, but he did even better from the Colombian only moments later when he blocked an angled drive at his near post with the Hoops rearguard in disarray.

Just before the half-hour mark, Elyounoussi gave away possession in the opposition’s half and it was quickly worked down the right wing. Morelos was onto the ball in a flash and Ajer sold himself with an ill-advised lunge that was shrugged aside by the attacker.

Morelos was allowed to carry on into the box and blast a drive at goal, but once again Forster was equal to the task as he saved at his near post.

Lennon’s men had rarely been seen as an attacking forced and their best chance came from a left-wing corner-kick from Ryan Christie in the in the 25th minute which was headed carelessly over the bar by Ajer from eight yards.

There was no surprise when the struggling Elyounoussi remained indoors at the interval with Mikey Johnston taking his place.

Likewise, when Edouard made his entrance in the 59th minute to make such a crucial impact. 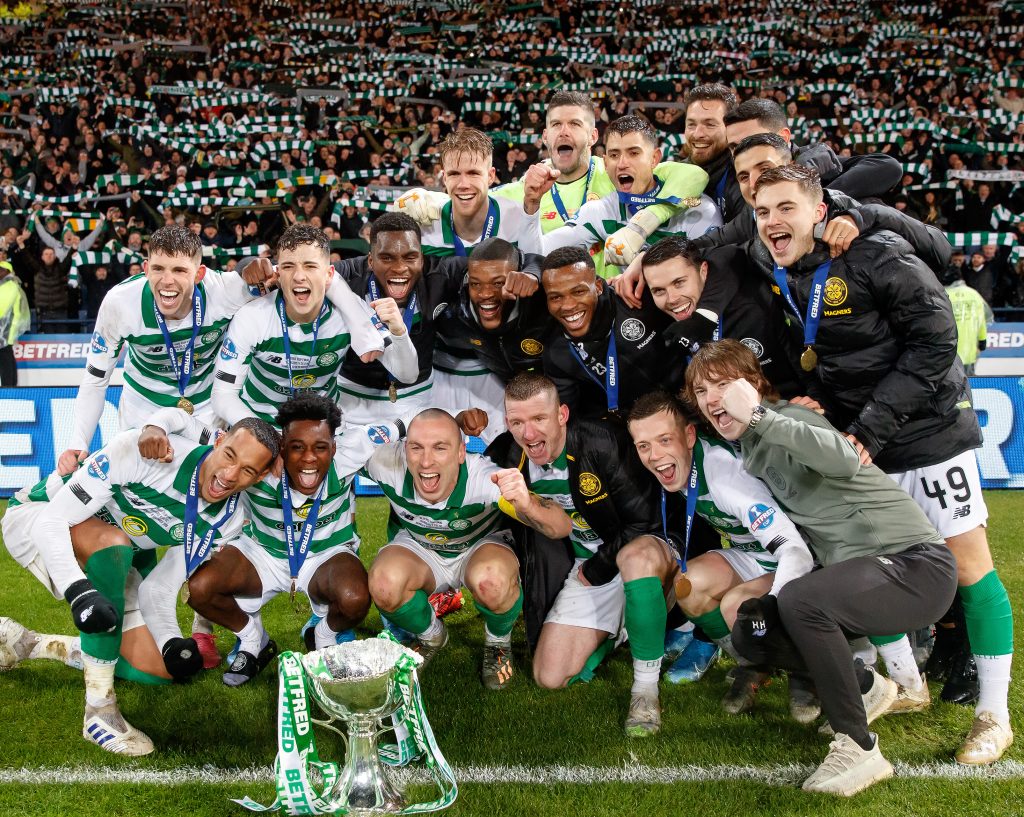 It was a hectic afternoon in terrible conditions, but the champions still found a way to somehow shine in the murkiness of the south side of the city.

Ten in a row and the quadruple is on!