Celtic Quick News on News Now
You are at:Home»Match Report»CELTIC 1 RANGERS 1: WAIT FOR IT AS TITLE BUBBLY REMAINS ON ICE
By CQN Magazine on 1st May 2022 Match Report

THE championship-winning champagne will have to remain on ice for another week at least after the derby tussle ended honours even at Parkhead this afternoon.

Celtic will be kicking themselves they did not claim all three points, but they will also be anxious about a second-half performance that looked extremely nervy with a worrying lack of composure throughout the team.

Still, once the dust of battle settled, Ange Postecoglou’s men remained six points ahead after leading at the interval through an excellent opportunist’s strike from Filipe Jota.

Now they await the arrival of Hearts in the east end of Glasgow on Saturday where they will get the chance to get the job done after this hiccup. 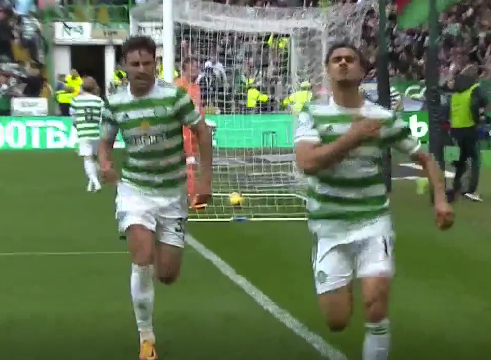 HAPPY DAZE…Filipe Jota races away in triumph after opening the scoring with Matt O’Riley in pursuit.

The Hoops fell away in the second-half although they could have been in a comfort zone 10 minutes after the interval when Daizen Maeda blazed over from 12 yards when he should have planted the ball in the net.

The visitors claimed their leveller in the 67th minute through Fashion Sakala and the defence and keeper Joe Hart will not be happy when they see reruns.

The Ibrox players were allowed to string a sequence of passes together before Ryan Kent released his team-mate who beat the keeper low at his right-hand post.

It was an awful goal to concede from start to finish.

And yet it had been so different in the opening half when Jota supplied the breakthrough goal in the 21st minute after a wonderful inter-changing move on the left unlocked the visiting defence. 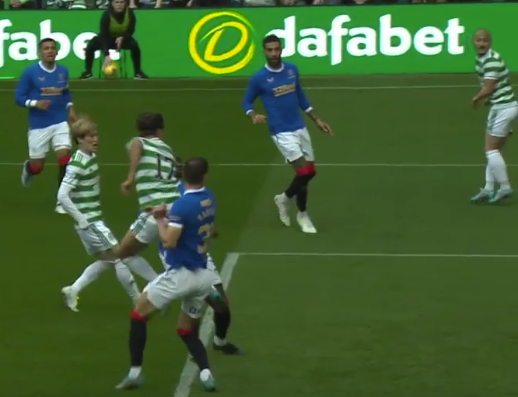 STRANDED…keeper Allan McGregor is flat-footed as the ball zeroes in on its target.

PICK IT OUT…Filipe Jota turns away as Kyogo Furuhashi salutes his effort. Allan McGregor and his defenders don’t share their emotions.

Callum McGregor started it with a pass to Greg Taylor who rolled it in front of Reo Hatate who gave it back to his captain. He passed it back inside to Taylor who upped the pace by shoving the ball in front of the rampaging Maeda.

The Japanese raider, playing on the left flank, raced into space before whipping over an inviting cross into the box and Jota was the first to react as he got in ahead of the hesitating Borna Barisic to flick the ball past the stranded Allan McGregor.

The Portuguese winger demonstrated the same determination as he had done in Dingwall the previous weekend when he claimed the killer second goal in the 2-0 win over Ross County.

Celtic Park erupted in joy as the Hoops players raced to congratulate Jota who had collected his twelfth goal with a fair amount of aplomb.

The first 20 minutes had seen both sets of players lock horns with no quarter asked or given. It was uncompromising and the home players had to show a reaction, which they did. 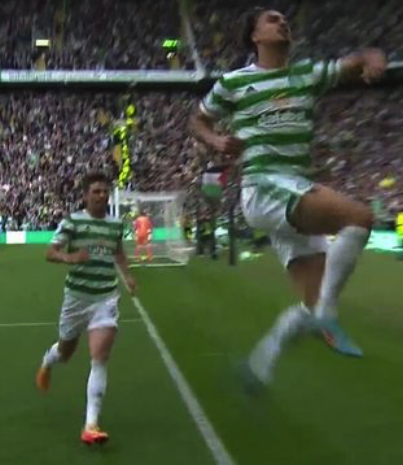 AIR WE GO…Filipe Jota leaps for joy as he celebrates his strike.

There was a scare in the 13th minute when Anthony Ralston switched off as a ball came in from the right and allowed Kent to get in front of him in a dangerous position in the box. Thankfully, the English winger bungled his final effort, but it was a warning shot across the Hoops bows.

In the 32nd minute, Jota had the opportunity to double Celtic’s advantage when he was picked out with a swirling high ball by Hatate.

The raider was thundering into space in the visitors’ penalty area, but he mistimed his header and his attempt sailed harmlessly over the bar much to the Ibrox side’s relief.

Kyogo Furuhashi slashed an effort over the bar from close range, but his embarrassment was spared when he was ruled offside. 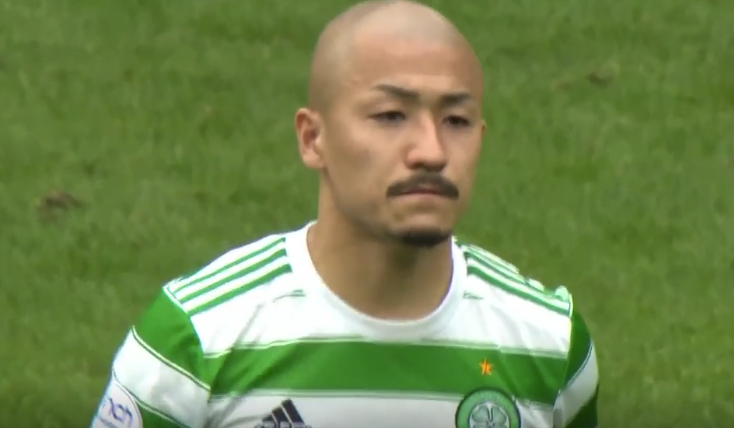 OFF DAY…Daizen Maeda passed up two excellent opportunities when he failed to hit the target.

And then Maeda squandered a fabulous opportunity three minutes from the interval when he was picked out by a searching cross by Jota.

The Japanese speedsters was racing in on goal with just McGregor to beat, but he appeared to take his eye off the ball and the chance was lost. It should have been a goal.

And Maeda was off target again in the 55th minute after Hatate and O’Riley combined to set him up with a clear look at goal, but he got far too much loft in his parting shot and lifted it way over the crossbar. 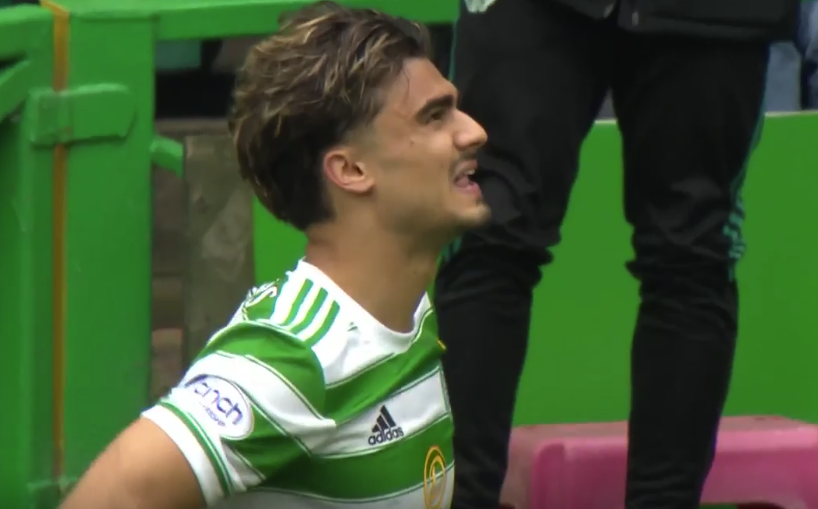 SO CLOSE…marksman Fiipe Jota reflects on the one that got away.

In the 61st minute, Postecoglou made a triple substitution with Giorgos Giakoumakis, Nir Bitton and Tom Rogic coming on for Kyogo, Hatate and O’Riley.

Six minutes later, the visitors grabbed their equaliser after some truly wretched defensive play from the hosts.

Four minutes from the end, Sakala was allowed to run clear and the Hoops breathed a sigh of relief when his low shot clattered off the left-hand post and rebounded to safety.

Just before that Hart was called into play to make a fine sprawling save from a close-range attempt from Scott Arfield after Scott Wright had wriggled free on the right. 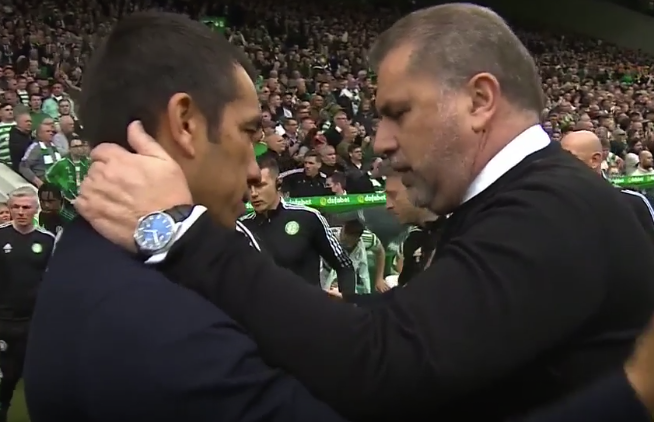 In the 73rd minute, Liel Abada was introduced for Maeda who had completely dropped off the pace.

In the end, Celtic had to settle for a point and all eyes are on the Hearts match at the same venue on Saturday when the bubbly could be cracked open after a year on ice.

After that, there is the midweek trip to Tannadice to take on Dundee United and then we can all look forward to Flag Day at Parkhead on May 14.

It’s only a matter of time, friends.