Celtic Quick News on News Now
You are at:Home»Match Report»CELTIC 1 RB SALZBURG 2: HOOPS THROUGH IN CRAZY NIGHT – THANKS TO ‘UNKNOWN’ TORE!
By CQN Magazine on 13th December 2018 Match Report

CELTIC rode a remarkable rollercoaster of emotions in the final Group B Europa League encounter at Parkhead tonight – and the fans celebrated after watching their side lose.

It was utterly astounding the way events somersaulted nearing the end of a game where the Hoops had been second best for so many periods of the contest.

The Austrians demonstrated why they were unbeaten in 28 games going into this one and no-one could argue when they made it 2-0 in the 77th minute. They were the superior team, no argument.

Brendan Rodgers’ men were heading for the exit with RB Leipzig winning 1-0 over Rosenborg in their home match. As it stood at that stage, the Scottish champions and the Bundesliga outfit were tied on nine points with the Germans going into Monday’s knock-out draw because of their superior head-to-head with the Parkhead men.

And then Tore Reginiussen entered proceedings and turned the situation on its head. With four minutes remaining in the Red Bulll Arena, he struck to give the Norwegians an unlikely draw – and hand a passport into the last 32 to Celtic.

It was a crazy evening in the east end of Glasgow that provided a game that had everything including Craig Gordon going from saviour to sinner before Tore’s lifeline.

Boss Rodgers looked grim faced at the end and he was clearly not too impressed with the what he had witnessed in a lopsided 90 minutes plus seven minutes stoppage time. 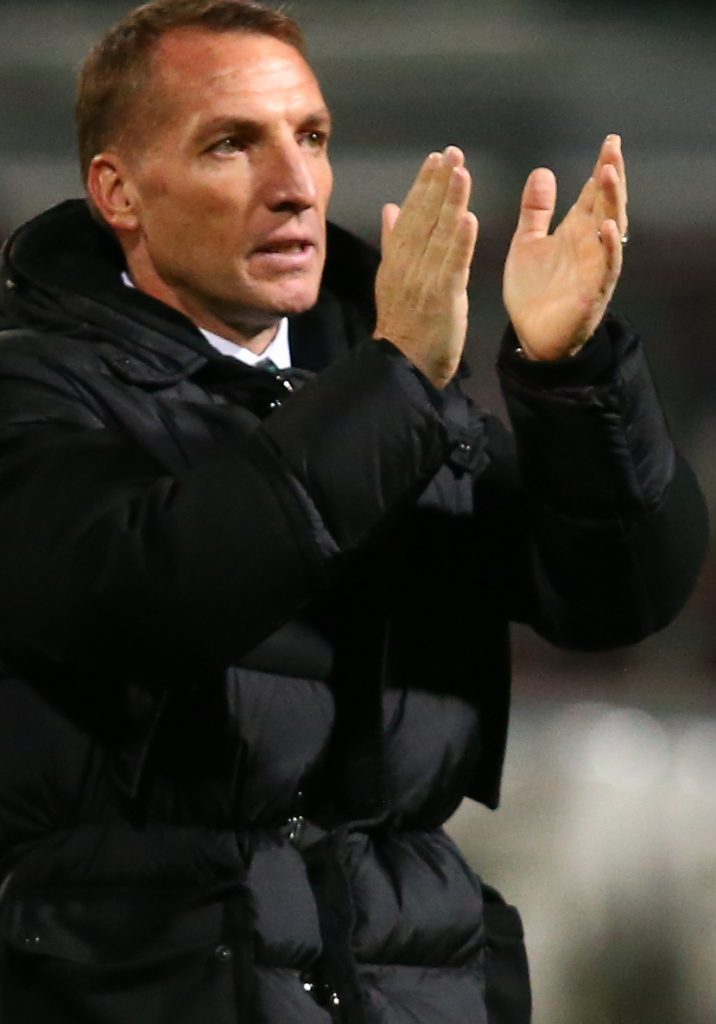 Olivier Ntcham, a 58th-minute substitute for the injured Ryan Christie, hit the consolation goal four minutes into overtime after fluffing a penalty-kick, awarded after makeshift striker Filip Benkovic had been pole-axed.

The Frenchman joined Scott Sinclair and Leigh Griffiths in becoming the third consecutive Celt to miss from the spot when keeper Aleksander Walke tipped his effort onto the post, but the midfielder followed up to knock in a left-foot effort from the rebound. It was that kind of a night.

The final whistle came shortly afterwards and the Austrians had completed the group with a commendable 100 per cent record with goals from Munas Dabbur and Fredrik Gulbrandson giving them victory at Parkhead.

Not that it mattered – thanks to an unknown Norwegian in action in Germany at the same time.

Celtic lived dangerously in a first-half fraught with anxiety and had keeper Gordon to thank for the blank scoreline at the interval.

The Austrians swarmed all over Rodgers’ men right from the first shrill of French referee Ruddy Buquet’s whistle and it made for uncomfortable viewing for the home support.

Gordon made two excellent saves to deny an exceptional team a couple of goals in the opening 45 minutes they dominated for large spells.

The experienced No.1 was called into action in the fourth minute when he leapt acrobatically to his left to touch over a soaring header from Zlatko Junuzovic that was zeroing in on his top corner.

It looked a goal all the way, but Gordon was alert even if his team-mates had switched off, most notably Tom Rogic who allowed his opponent to race away from him to move into a great position to get on the end of a right-wing cross. 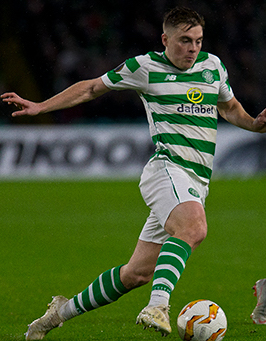 The Aussie playmaker was a no-show during that period and struggled to match the Salzburg midfielders. When the smoke of battle cleared, it was not a memorable performance from Rogic who never picked up the pace of a frantic confrontation.

Christie, so impressive in recent months, didn’t enjoy time or space against a well-drilled side that looked at home playing a high-intensity game that clearly rattled the Scots.

Callum McGregor could hardly draw breath before a crimson swarm set upon him and there was virtually no rhythm in the formation with possession needlessly conceded on far too many occasions.

Scott Sinclair was guilty of giving the ball away, but James Forrest showed invention and industry while Odsonne Edouard did his best in trying circumstances.

Gordon’s other moment in the first-half spotlight came in the 31st minute after the struggling Mikael Lustig had been replaced by Kristoffer Ajer.

The Swede, celebrating his 32nd birthday, was the recipient of a sore head courtesy of the marauding Stefan Lainer in the early moments and he eventually had to admit he couldn’t carry on to make way for the Norwegian, making his comeback after his own horrific eye-socket injury against Livingston last month. 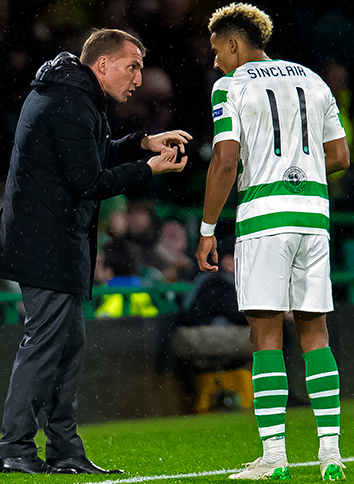 A WORD IN YOUR EAR…Brendan Rodgers talks to Scott Sinclair before his half-time substitution.

Ajer obviously didn’t have his bearings when he hit a pass into the tracks of opposing striker Hannes Wolf who snapped onto the ball before Jozo Simunovic could intercept.

The pacy frontman raced clear and tried to slot the ball in a corner, but Gordon reacted magnificently to touch the ball round his right-hand post.

Salzburg had also hit the woodwork in the 17th minute when a header from Jerome Onguene, following a left-wing corner-kick, flew over Gordon and struck the underside of the crossbar before being cleared by Christie.

Sadly, the youngster was stretchered off in the second-half after attempting a block tackle. It must be hoped it is not serious.

Rodgers realised he had to change something at the interval and no-one was surprised when Scott Brown was introduced for the ineffective Sinclair with McGregor moving into a more offensive role.

There were brief moments of hope and expectancy, but Salzburg recovered to keep it tight while they continued to press the game high into Celtic’s half.

Dabbur headed the opener in the 67th minute when he got in between Benkovic and Ajer to direct a powerful header at goal following a neat ball in from the right.

It hit Gordon on the shoulder before ricocheting into the roof of the net. Questions had to be asked about how the Austrians were given so much time and space to develop the move on the Celtic left. Tierney was exposed and should have expected cover from Ntcham.

And to leave Dabbur with a clear sight of goal six yards out can only bring one disastrous outcome. 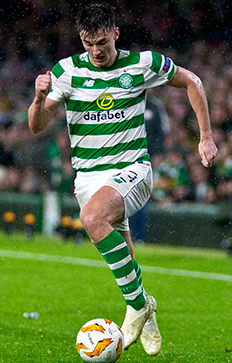 ON THE BALL…Kieran Tierney charges forward.

Ten minutes later, Gordon was involved in a howler when he tried to roll the ball to Benkovic and it was intercepted by a grateful Gulbrandsen who rolled the ball into the empty net for the second.

Gordon, following his earlier heroics to keep the team in the game, might not be so harshly dealt with.

Ajer had a horrendous miss from two yards five minutes from time before Ntcham’s rebound effort, but Celtic were already heading through thanks to Tore Reginiussen.