MOUSSA Who? That was the question after Olivier Ntcham took over the French Connection to score the only goal of the game as Brendan Rodgers racked up another win against the Ibrox team.

Odsonne Edouard also played his part in the only goal of the game in the 62nd minute at Parkhead this afternoon – just when it looked as though the champions wouldn’t get a break.

James Forrest and Mikael Lustig clattered efforts off the crossbar in the first-half and Ntcham and substitute Leigh Griffiths, on for the tiring Odsonne Edouard, had similar fate after the turnaround.

But something had to give as Rodgers looked for his TENTH win over the Ibrox side in 12 games, the other two ending in draws.

Tom Rogic was the architect of the goal when he beat Ryan Jack about 30 yards from the Celtic goal after a rare Ibrox foray into the Celtic half.

The Australian midfielder then carried the ball forward at pace and with menace while Forrest zipped up the the right to give him a passing option.

He knocked it inside to Edouard who cleverly set up Forrest arriving at an angle. His brilliant vision spotted Ntcham and the touchline ace slipped a ball into his tracks.

The Frenchman didn’t hesitate as he swept the ball into the inviting net from 10 yards. 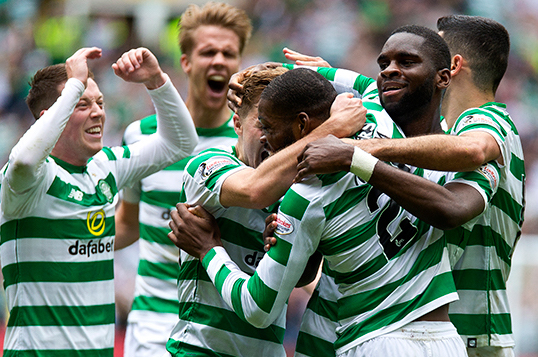 FRENCH FANCY…Olivier Ntcham is mobbed by delighted team-mates after his winner.

It was a deserved winner for the champions and gave Rodgers his first triumph over his former Liverpool skipper Steven Gerrard.

There could be no complaints from the new Govan gaffer. His side had been on the back foot right from the off and they rode their luck.

Worryingly, it was goalless at half-time, despite the Hoops having a massive percentage of the possession.

Gerrard’s men were living dangerously, but Dame Fortune was scowling on Celtic – especally in two quickfire minutes when Forrest and Lustig both hit the bar with McGregor helpless.

And the Ibrox keeper should have had no chance five minutes from the interval when Edouard really should have scored with a header on the six-yard line.

The £9million man, back in the team at the expense of Griffiths, got on the end of a superb piece of interchanging between Kieran Tierney and Callum McGregor and should have buried his effort. Unfortunately, his effort was straight at McGregor who clawed it away for the champions’ sixth corner of the first 45 minutes.

Earlier, in the 33rd minute, Forrest was about 25 yards out when the Ibrox side failed to clear another set-play.

The winger let fly with a ferocious right-foot effort, but it took a nick off Jack on its way to clattering the woodwork with McGregor motionless. 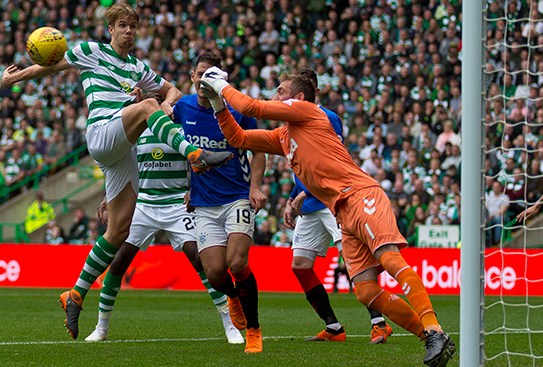 FIST IN TIME…keeper Allan McGregor punches the ball away from Kristoffer Ajer.

From the resulting corner-kick, Dedryck Boyata helped on Ntcham’s left-wing cross and Lustig was suddenly left with a clear header about 12 yards out.

The Swede deliberately nodded the ball towards the top right-hand corner, but, with the keeper helpless, the effort thudded against the bar and was booted to safety.

It looked as though it was turning into one of those days for Rodgers’ men as they piled on the pressure, but were being denied by the bounce of the ball.

Referee Willie Collum didn’t cover himself in glory in the first-half, either, and Scott Brown and Edouard will still be baffled as to how they ended up getting booked.

The skipper made a sliding challenge on Kyle Lafferty that saw the Northern Ireland international take to the air. However, pictures proved there was absolutely no contact. 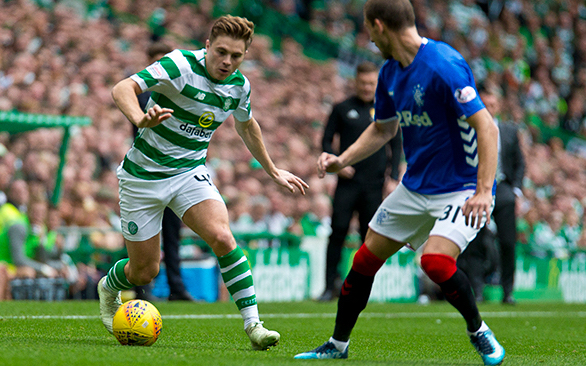 ON THE RUN…James Forrest prepares to take on the Sevco defence.

Edouard chased down a ball and put in a solid tackle that saw Jack go down writhing. Collum bought it, flashed the yellow and Jack bounced back to his feet, as expected.

Keeper McGregor was extremely fortunate to remain on the pitch after kicking out at the grounded Kristoffer Ajer in the 25th minute following a goalmouth melee.

Neither the match official nor his assistant saw the incident and the veteran shotstopper got away with his sneaky actions.

Four minutes after the turnaround, Ntcham flashed in a low drive and McGregor got a hand the ball to send it spinning up onto the crossbar. He grabbed the rebound when it came down and was then yellow-carded for wasting time.

The corner-kick was rising at a formidable rate as the Hoops earned 13 just after the hour mark.

If this had been a boxing contest, the referee would have stepped in and put the visitors out of their misery. The Celtic pressure was relentless and on the odd occasions the Ibrox men broke forward, Dedryck Boyata was on hand to clear the danger.

Surely it can be no coincidence that a defence that had conceded in six consecutive games have not lost a goal in the three games since his return. 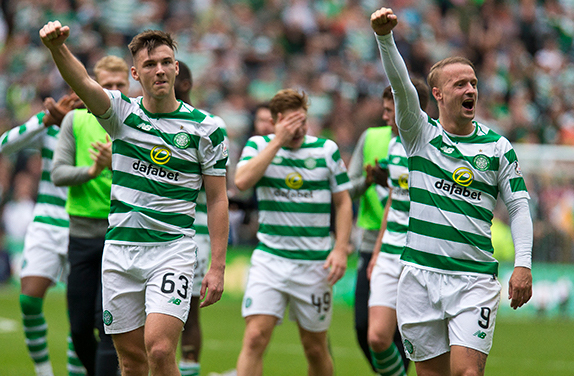 Rodgers brought on substitutes Griffiths, Ryan Christie and Scott Sinclair for Edouard, Rogic and Forrest at strategic points as he made sure Celtic would win their first Glasgow derby of the campaign.

Griffiths, fresh from netting his 100th goal for the club on Thursday, almost doubled the advantage in the 82nd minute with a wicked low shot that had McGregor scrambling, but his effort struck the outside of the post and bounced to safety.

Earlier, he had shipped over an inviting near-post cross from a left-wing corner-kick, but Lustig’s header flashed wide of the far upright.

And McGregor had a good stop from a thumping free-kick from Griffiths that hurtled through the defensive wall and almost caught him on the hop.

Overall, it was a satisfying win for the champions and Ntcham is certainly the fans’ French fancy today. The midfielder was totally committed to the cause and deservedly won the game – and the Man of the Match award.