CATASTROPHIC Celtic are OUT of Europe for another season – unless someone can conjure up a miracle.

Neil Lennon watched in abject misery as his team folded to an utterly unacceptable dreadful loss at Parkhead this evening to Sparta Prague, who had been hammered 3-0 by AC Milan and 4-1 by Lille in the earlier games.

The hapless Hoops have shed eight from a possible nine games and have now lost three consecutive games at home for the first time in THIRTY years.

Sparta have now joined Steven Gerrard’s Ibrox outfit and AC Milan in beating a devastated Celtic team in the east end of Glasgow. 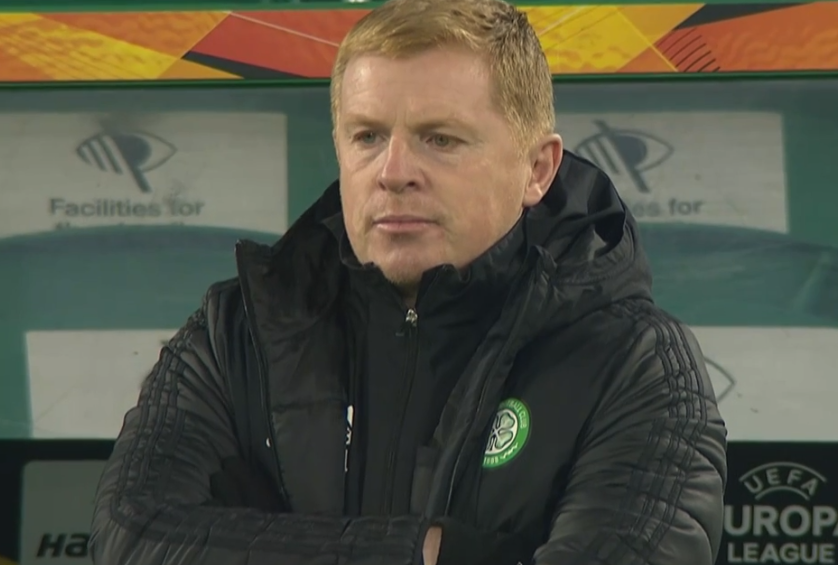 In one of their worst-ever showings in Europe they fumbled their way to a loss that can only be rated as rank rotten. There were far too many passengers on an evening where the Scottish champions pushed furiously on the self-destruct button.

Celtic plunged to levels below mediocrity as they went in two goals adrift after an x-certificate first-half display.

It was inconceivable to believe this was the same starting line-up that wiped out Aberdeen in Sunday’s Scottish Cup semi-final.

After the usual sparring in the opening period, the Hoops lost the plot as they allowed the Czech Republic outfit to grow in belief with every passing minute as Neil Lennon’s men got lost in a blunderland.

A FIST IN TIME…Scott Bain tips over from Lukas Julis. 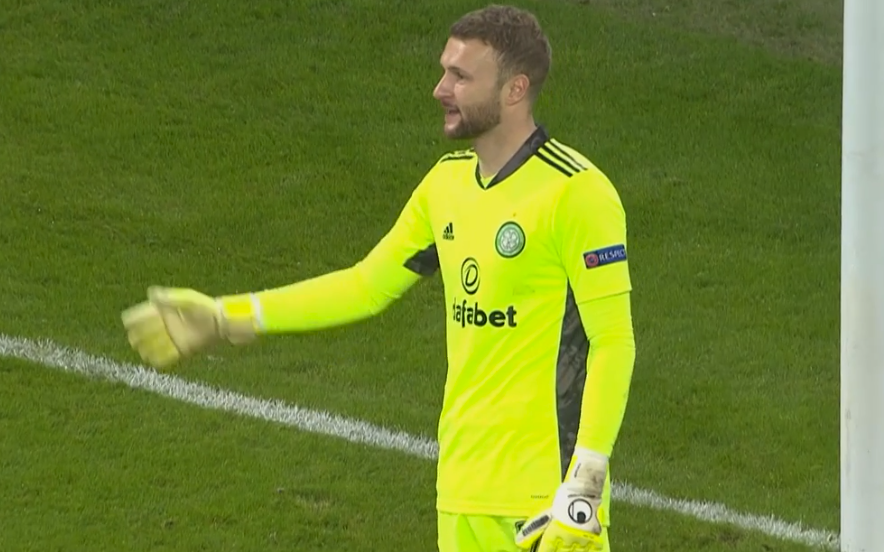 Three minutes before the opening goal in the 26th minute there was a horrible sequence that highlighted everything that was unacceptable about this display. Amazingly, the home side gave the ball away THREE times before it ended with the ball clattering off Scott Bain’s crossbar.

Shane Duffy kicked off the catalogue of calamity with a dreadful free-kick from inside his own half that went straight to a Sparta player. It was returned and then Scott Brown presented possession back to the visitors.

Jeremie Frimpong won it back and knocked it to Nir Bitton who then produced an ineffective clearance with a sloppy pass that saw David Moberg Karlsson force a good save from Bain as he got a foot to his low shot.

It was put back into the danger zone and on this occasion Bitton was again slow to react and Lukas Julis blasted a shot against the angle of crossbar and post with the keeper helpless. 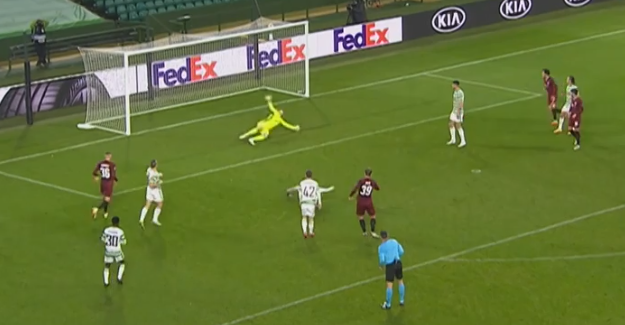 DOUBLE TROUBLE…Lukas Julis makes it 2-0 with a low shot.

It should have acted as a wake-up call for the team. Sadly, they were still in a weird lethargy as they gifted Sparta the opening goal.

Bain made a good save as he tipped away a 10-yard effort from Lukas Julis, but the attacker got his revenge only moments later. Once again, the defence failed to deal with a set-piece to the near post and a header from Karlsson hit the far post. Before anyone could sense the danger, Julis snapped onto the loose ball and thumped it into the roof of the net.

The goal gave the visitors belief and energy as the home side continued to gift possession at every twist and turn. At times, it was impossible to recognise the players wearing green and white hoops.

Frimpong tried hard on the right as Diego Laxalt did on the opposite flank, but there was precious little leadership from Brown and Callum McGregor as the side tried to find a pattern.

There was a glimmer of hope when Frimpong knocked a ball inside for Ryan Christie, a player who at least looked as though he was trying, who swung in an inviting diagonal pass.

Mohamed Elyounoussi timed his run to perfection to divert the ball over the keeper, but the effort clipped the bar and the chance was gone.

Just before the interval, the home defence crumbled again and once more they were punished by Julis. Bitton was weak with his defensive duties as he failed to deal with Karlsson on the right and his low pass went to Julis who took the ball wide of the hesitant McGregor before sliding a neat finish wide of Bain at his left.

All eyes were on Celtic starting the second-half with a bit more vim and vigour. Instead, though, a lackadaisical pass out of defence by the nervy Bain presented the visitors with another chance and luckily for the comeback keeper an opponent was wayward with his finishing.

As expected, Leigh Griffiths came on along with Hatem Abd Elhamed in the 60th minute with skipper Brown and Elyounoussi being withdrawn. 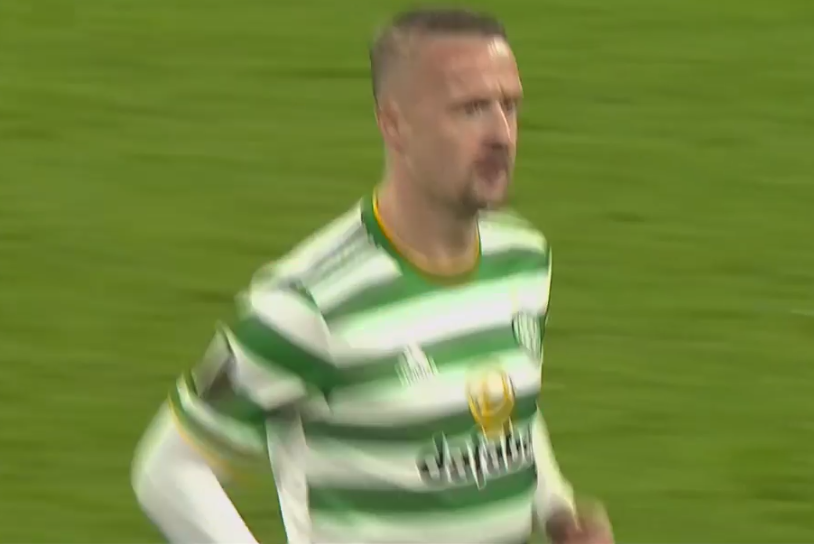 STRIKE ONE…Leigh Griffiths nets goal after coming on as a sub.

Five minutes later, Griffiths threw his team-mates a lifeline when he seized onto a rebound from the keeper after he had pushed away a shot from Tom Rogic. The frontman first-timed a right-foot drive into the inviting net and suddenly there was hope.

In the 76th minute, Elhamed, who blundered to gift Ferencavros the goal that killed off the Champion League hopes earlier in the season, was sloppy with a ball inside and the Czechs raced upfield. 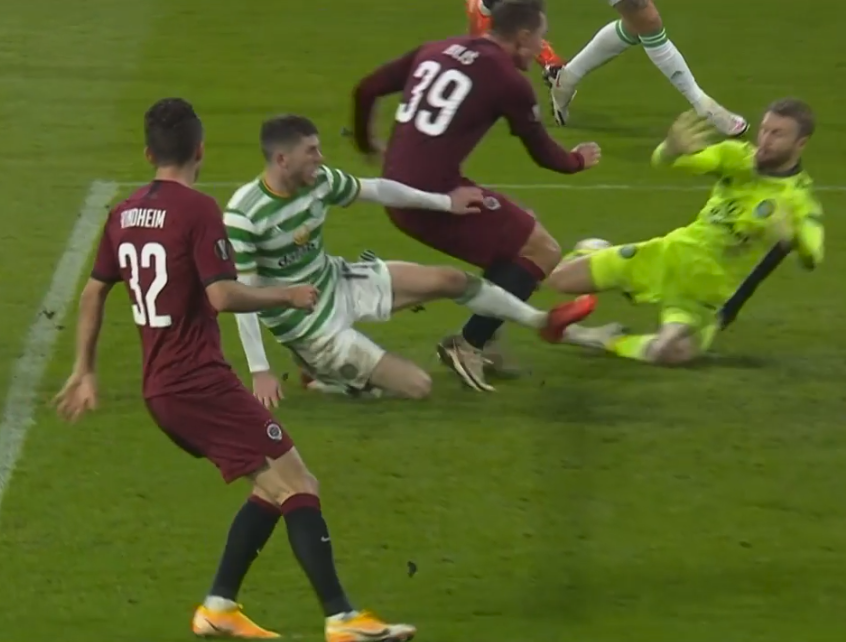 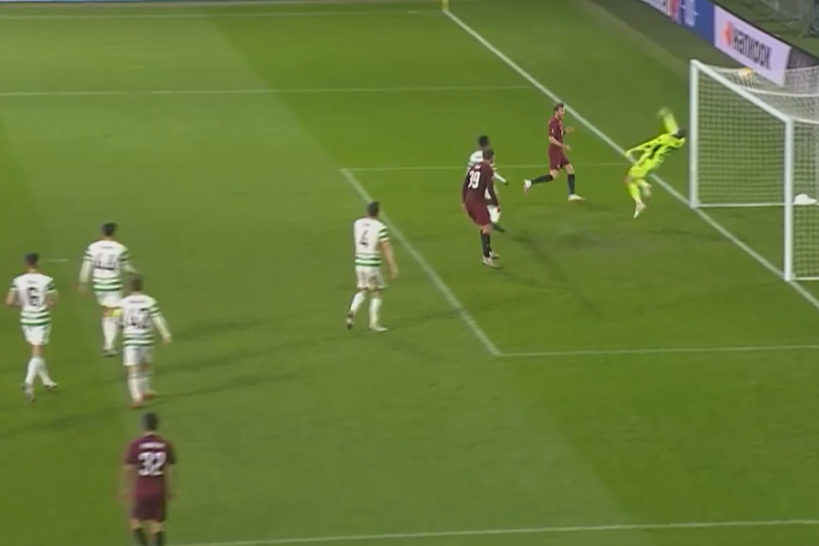 HOOPLESS…the Celtic defence is all over the place as Ladislav Krejci heads in No.4.

Karlsson bamboozled the lumbering Duffy as he left him in his slipstream on the flank before whipping over a low cross and Julis was smack in front of goal to turn the ball beyond the stranded Bain with the defence once again marked absent.

It was dire stuff and in the 80th minute Lennon threw on Olivier Ntcham and Albian Ajeti for Edouard and Laxalt. They had just warmed up by the time Ladislav Krejci scored the fourth goal with a header at the back post.

His effort is the FOURTEENTH goal the Hoops have conceded in six games and the alarm bells are ringing loudly around the east end of Glasgow.

This is as bad as it gets.