CELTIC’S catastrophic campaign continued in a shambolic defeat against St Mirren at Parkhead this afternoon.

The nine-in-a-row champions contrived to drop their TWELFTH point out of a possible 18 since the turn of the year.

Neil Lennon’s faltering Hoops have suffered a calamitous form collapse since the tun of the year and have now lost at Ibrox and today while drawing twice against Livingston and once against Hibs. Their only win in a miserable 2021 came in the 2-0 midweek success over Hamilton Accies.

They had the opportunity to claw back three points from the 23 points gap while they still had two games in hand.

The misfiring Celts blew the chance and no-one could complain. St Mirren turned up with a game plan, led twice in the first-half and did enough after the interval to take the three points to Paisley.

Celtic’s misery was emphasised with practically the last touch of the ball when keeper Jak Alnwick dived pull-length to push away a netbound header from Shane Duffy that would have salvaged a point. In the ninth minute, Kristoffer Ajer, again looking eager to get involved, galloped down the right to send in a superbly-weighted diagonal ball into the box, but Mohamed Elyounoussi was slow to read his team-mate’s intentions and the chance was gone.

The Hoops were struggling for inspiration and there was precious little imagination coming from the midfield. It was no surprise when the Paisley outfit capitalised with the opening goal in the 18th minute.

The hesitant defence was shredded as their opponents put together a slick move on the right and Dylan Connolly slid the ball in front of Kristian Dennis. He snapped onto the pass and rifled a low drive under Scott Bain who got a touch, but couldn’t prevent the effort from hitting the net.

Celtic tried to respond immediately and Odsonne Edouard looked slow to snap up an opportunity that came his way. SAINTS ALIVE…Kristian Dennis snaps a shot past Scott Bain to put the Paisley side ahead.

The home players then appealed for a penalty-kick when a right-wing corner-kick appeared to strike Joe Shaughnessy on the arm, but referee Bobby Madden ignored the claims.

In the 27th minute, Greg Taylor failed to clear a left-wing cross and Dennis latched onto the ball to thump in a low drive, but Bain was right in line to grab the shot.

There was a flash of the Celtic the fans adore when they equalised in the 33rd minute and it came after a splendid sequence of possession play that started with a probing 40-yard run by Nir Bitton.

The Saints cleared the immediate danger, but the ball was worked to Ismaila Soro who sent Callum McGregor scurrying into the box. The captain picked out Edouard who took a touch with his right and then zipped a low left-foot effort past Alnwick. 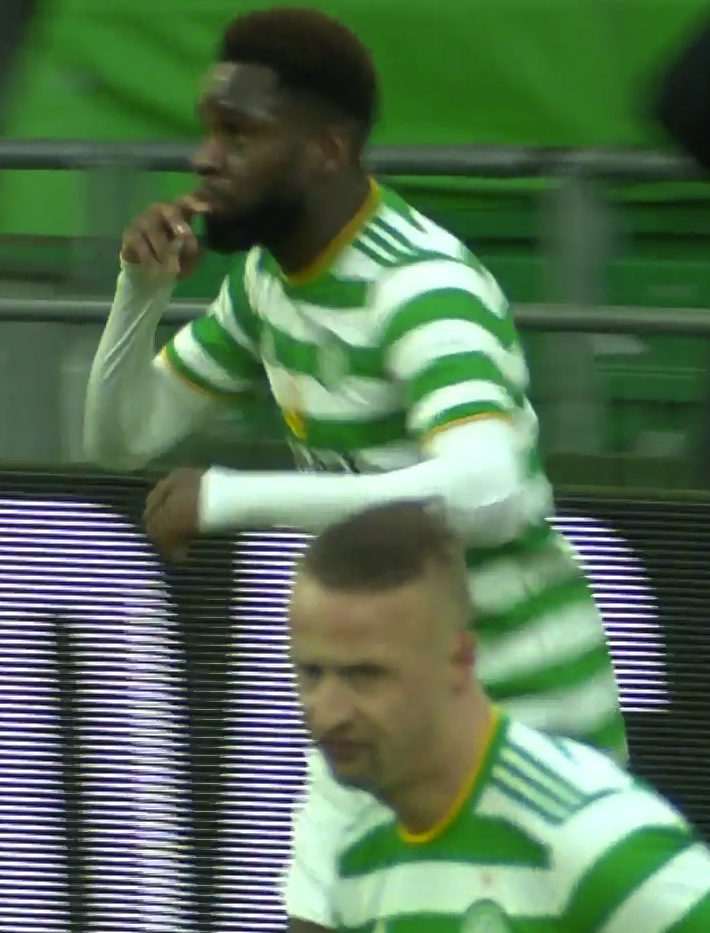 KISS OF LIFE…Odsonne Edouard and Leigh Griffiths celebrate after the Frenchman’s equaliser.

But that was nullified four minutes later after a dreadful blunder by Shane Duffy allowed Ilkay Durmus a clear shot at goal. The error-prone central defender lost the flight of a left-wing ball from Kyle McAllister and that gave the Saints striker the opportunity to nick in, control the pass and wallop a close-shot shot past the stranded Bain.

The Republic of Ireland skipper followed the ball as it bounced back out of the net and volleyed it high into the stand in frustration. He knew he was culpable.

In the 40th minute, David Turnbull attempted to place a low drive into the keeper’s left-hand corner, but Alnwick got down smartly to scramble the effort clear. The first-half came to an end with Edouard firing over the bar and Bitton slashing one wide of the right-hand upright. 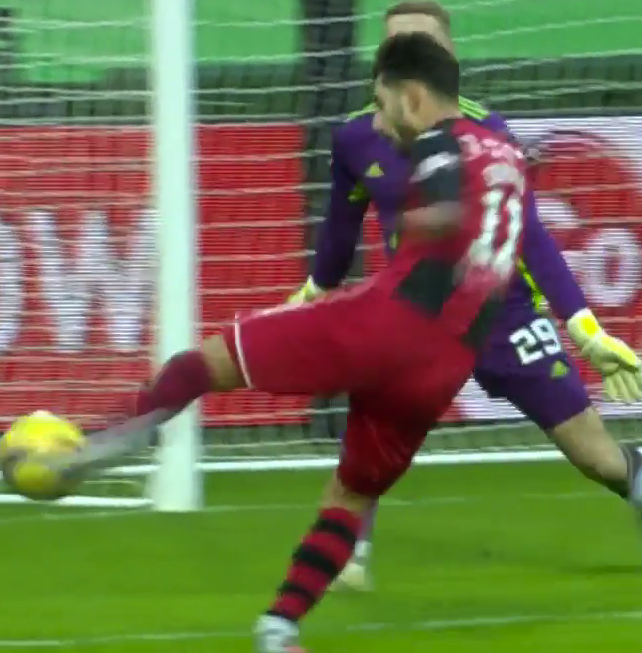 BY THE LEFT…Ilkay Durmus blasts No.2 beyond Scott Bain for the points clincher.

Bitton turned his ankle in stoppage-time and didn’t come out for the second-half with Stephen Welsh taking his place while Tom Rogic came on for the ineffective Leigh Griffiths.

Celtic’s defence continued to be in disarray early in the second-half when Ajer failed to clear a simple straighforward ball down the field from Alnwick. The clearance dropped to McAllister who first-timed a 25-yarder that took a touch off Duffy and flew over the crossbar with Bain a relieved man.

Whatever Neil Lennon said to his troops during the interval it wasn’t working. They struggled to get into any sort of rhythm into their game and the visitors looked fairly comfortable as they stroked the ball around. It must have been painful watching for the Hoops manager and his No.2 John Kennedy.

And, of course, the fans at home.

In the 62nd minute, the frustrated gaffer threw on Ryan Christie and Albian Ajeti for Soro and Elyounoussi as he hoped a rejig in the formation may bring a change of fortunes. 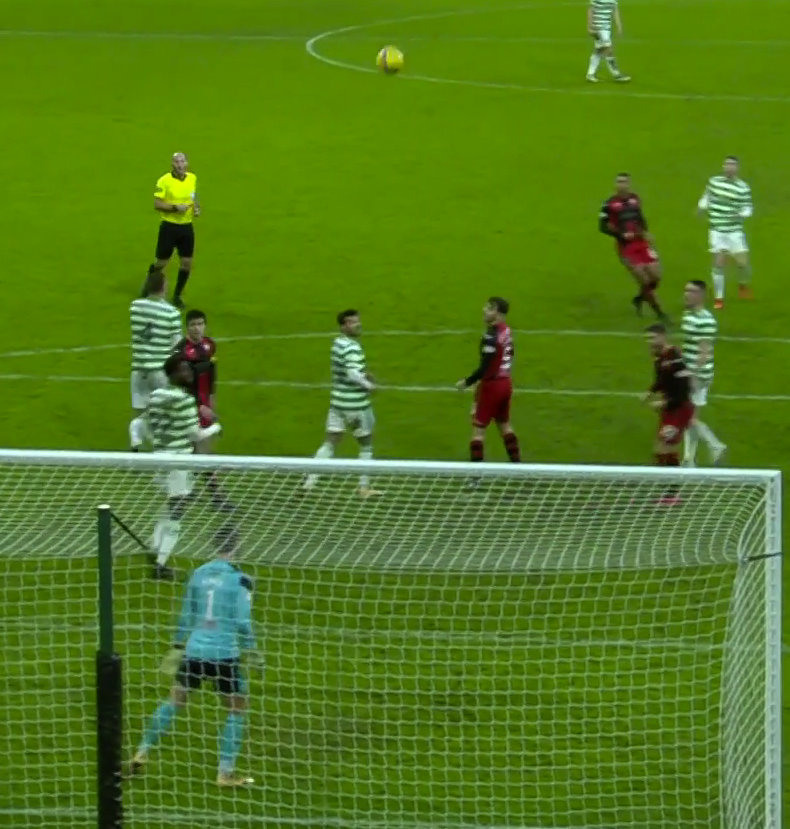 McGregor and Turnbull tried manfully to spark a revival, but nothing was happening in the firing line with Edouard and Ajeti far from being the dream team up front.

The team were being forced to have shots from distance and Christie walloped two high and wide as he searched for the answer.

Mikey Johnston was next to be thrown into the fray as he replaced Turnbull in the 81st minute.

It didn’t matter, the points were already heading for Paisley.