A WONDER strike from Filipe Jota signalled Celtic’s intentions as they fired out of the starting blocks in the new campaign this afternoon.

A packed and pulsating Parkhead was a colourful spectacle on Flag Day – and the champions did their best to match the razzmatazz against Aberdeen as they set about their task in determined fashion.

Stephen Welsh had them ahead before Jota took centre stage with a mesmerising piece of tricky and an explosive shot that almost ripped the net from its stanchion.

The little Portuguese wizard, who had been busy all day, made certain the points would remain in the east end of Glasgow with some typical dazzling footwork 15 minutes from time. 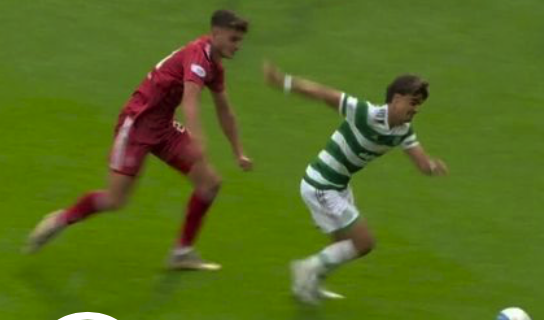 MESMERISING…Celtic’s man of magic Filipe Jota leaves a Dons defender in his slipstream.

Substitute David Turnbull got the move in motion with a simple pass to Jota with little danger threatening. However, the raider took off, swept past one challenge, dragged the ball across the 18-yard line and then sent a whiplash right-foot drive hurtling over the helpless keeper into the top corner of the net.

It was a golden moment from the fans’ favourite – and we all know there are more like that one in the exciting attacker’s locker.

There were exactly two minutes and 33 seconds on the clock when the Hoops claimed their first goal of the season.

Remarkably, with all that firepower at the champions’ disposal, it was centre-back Welsh who claimed the honour.

The Dons were undone by a Matt O’Riley right-wing corner-kick that dropped into the danger zone for the defender to stride forward and time his leap to perfection as he made contact with the ball to send a six-yard glancing effort away from stranded keeper Kelle Roos.

THE FIRST OF THE SEASON…Stephen Welsh watches his header fly into the bottom right-hand corner of the net.

After that breakthrough goal, it looked as though it would be a matter of how many before the interval as Ange Postecoglou’s men drove forward in relentless fashion.

Worryingly, though, it appeared as though the players wanted to score the perfect goal and a procession of chances were made and lost because of over-elaboration.

As expected, Reo Hatate was busy right from the off and he had a low drive on target in the ninth minute, but it lacked the oomph to trouble the visiting Dutch netminder who got down quickly to his right to deal with it.

Shortly afterwards, the new Dons shorstopper was in action again as he reacted smartly to push away a scorching angled effort from Kyogo Furushai after Jota had set up the opportunity.

In the 25th minute, Hatate and O’Riley combined for the Danish Under-21 midfielder to flash over a cross from the left, but a stretching Kyogo just couldn’t make proper contact at the back post and his drive zipped wide of the upright. 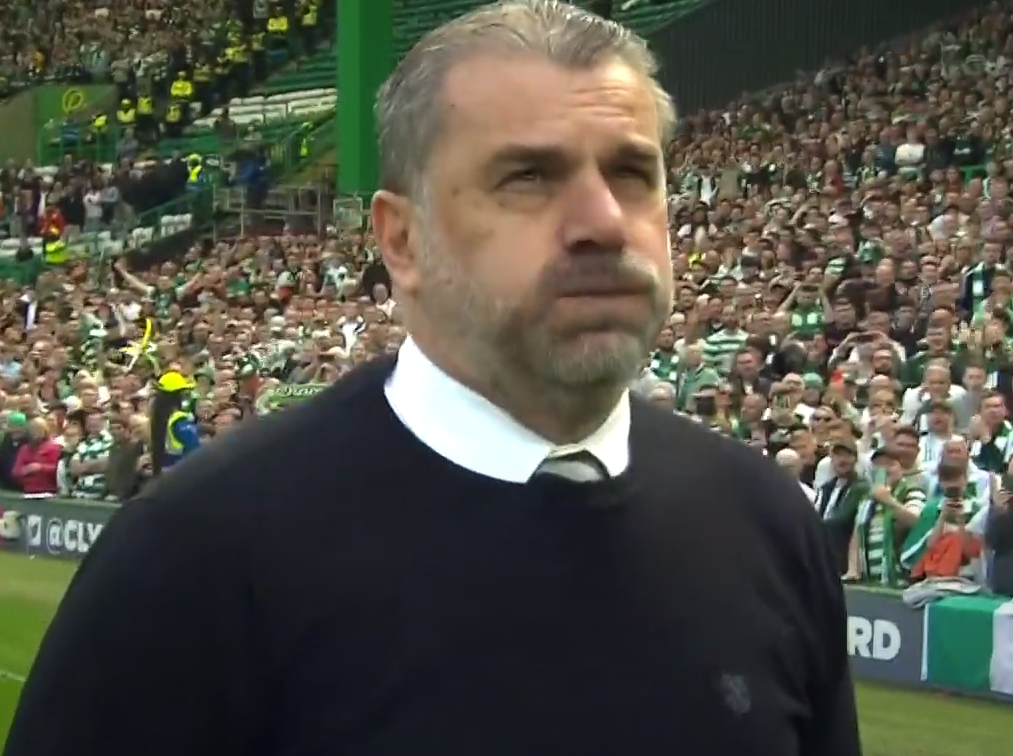 PARADISE…Ange Postecoglou at a packed Parkhead.

Just after the half-hour mark, Jota set up O’Riley on the edge of the box and his thunderous first-timer was punched over the bar by the athletic Roos.

Jota rolled one into the net after a pass from Callum McGregor found him in the clear six yards out, but he was clearly offside and referee Nick Walsh cancelled the goal.

Celtic were dominating possession, but they had a fright seven minutes from the turnaround. The Dons broke on the left and ex-Celt Jonny Hayes was left unmarked inside the box.

There was a massive sigh of relief from Joe Hart and his defenders when the Irishman sent his effort a foot past the right-hand upright.

In the 56th minute the champs were denied what looked like a stick-on penalty-kick after Hatate was sent flying by an assault by Anthony Stewart right in front of the referee. It looked a clear spot-kick, but the match official chose to ignore the claim.

The Japanese midfielder could hardly believe Walsh’s decision. His feelings were shared by just about everyone who witnessed the clumsy challenge. 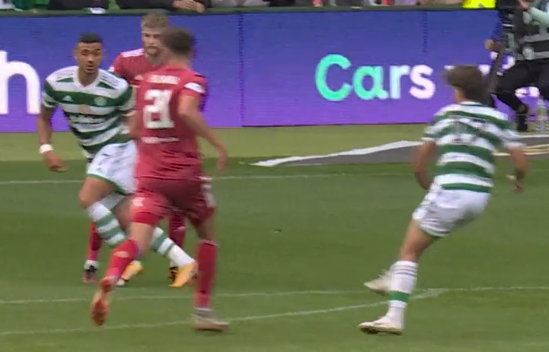 BY THE RIGHT…Filipe Jota takes off as he fires his drive at goal.

PICK IT OUT…Dons’ Dutch keeper Kelle Roos has no chance as Jota’s drive rockets into the net for the second goal.

In the 66th minute, Postecoglou freshened up his line-up by introducing Turnbull, Liel Abada and Giorgos Giakoumakis for Hatate, Kyogo and Maeda.

Jota’s magic moment arrived in the 75th minute to keep his superb scoring record against the Dons. He has netted in all four games in which he has faced them and collected five goals in all.

Eight minutes from the end, Anthony Ralston and Aaron Mooy came on for Josip Juranovic and O’Riley.

Within moments, Hart displayed extraordinary reactions to tip over a deflection from skipper McGregor.

It would have made a nonsense of the final scoreline if that had gone in. If Celtic learned anything this afternoon is that they must be more clinical in front of goal.

This game should have been out of sight long before Jota conjured up his world-class strike.