KYOGO FURUHASHI took centre stage again at Parkhead this evening as Celtic triumphed to take a two-goal advantage to Alkmaar for the second leg of the Europa League play-off final a week tomorrow.

The Japanese frontman, an instant hero with the fans, was a goaltaker and a goalmaker as Ange Postecoglou’s side earned a hard-fought victory against a very capable Dutch outfit.

Kyogo scored the opener in the 12th minute and then set up James Forrest for the second just after the hour mark.

It was a night for heroes and the manager and his players know something identical will be required next week if the Hoops are to reach the group stages of the competition. 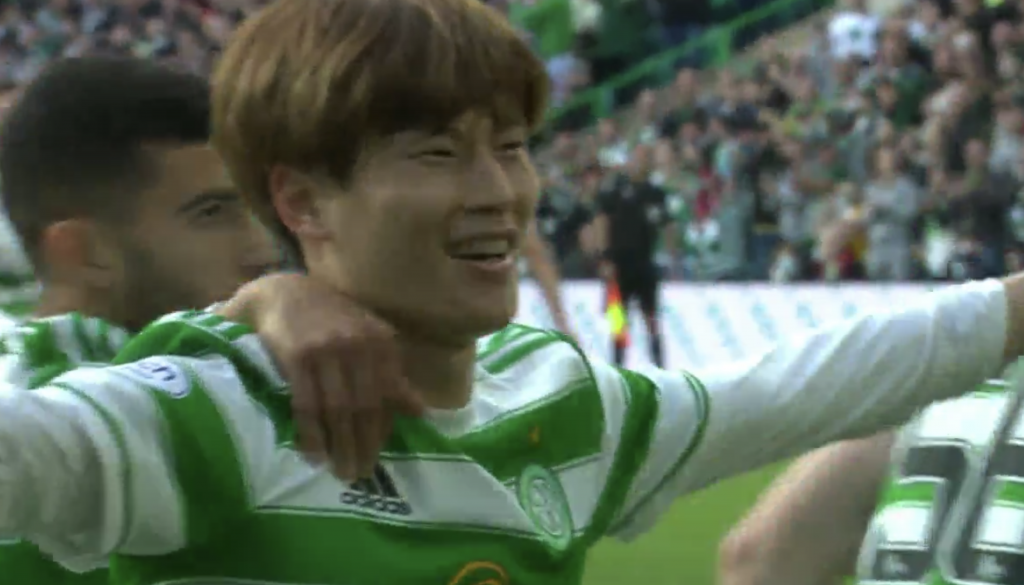 HAIL THE HERO…Kyogo Furuhashi beams with delight after scoring the opening goal.

Carl Starfelt was slow to react to a Dutch breakaway in the fourth minute as he was nutmegged and left in the slipstream of the rampaging Zakaria Aboukhtal. The sluggish Swede, playing on the left of the central defence, tried to rectify the decision as he raced back. Fortunately, the Alkmaar forward dived theatrically in the hope of a penalty-kick, but the referee was having none of it.

A minute later, Joe Hart made a remarkable save to defy the opposition when Vangelis Pavlidis got in behind Stephen Welsh to angle a low drive towards the keeper’s right-hand post. The veteran England international thrust out a foot, knocked the ball onto the inside of the upright and grabbed the rebound.

In the 12th minute, though, a touch of magic from Tom Rogic and a deadly finish from Kyogo brought the opening goal for the Hoops.

The Australian playmaker indulged in a little bit of keepy-uppy as he sauntered away from the defence on his way to the left bye-line before clipping an inviting cross to the back post.

The Japanese striker was lightning swift as he raced into the danger zone and made perfect contact with his right foot to thump the ball into the roof of the net from close range. It was breathtaking technique from the team-mates.

SAVIOUR…Joe Hart prevents Celtic from going a goal down in the opening minutes with an amazing reflex save.

That was the signal for the Hoops to roar forward and keeper Hobie Verhulst then made a superb double save to deny an angled drive from Liel Abada and then a 25-yard effort from Rogic which he punched to safety.

The capacity crowd were loving every moment of it as their favourites went for the jugular and Forrest cut in from the left to zip in a powerful 20-yard shot that was acrobatically pushed to safety by the keeper in the 25th minute.

Four minutes later, Starfelt, who had switched back to the right, surrendered possession cheaply with a sloppy pass inside and the Dutch broke menacingly at speed and it was left Hart to save his team-mate from a red face with an excellent diving save to his left to push away a low and hard drive from Aboukhtal.

In the 40th minute, it was the turn of the busy David Turnbull to have a shot from outside the box, but his right-foot drive screwed wide of the left-hand upright.

There were some heart-in-the-mouth moments as the interval loomed and there were groans when Greg Taylor gifted the ball in a threatening area, but Starfelt mopped up the danger. 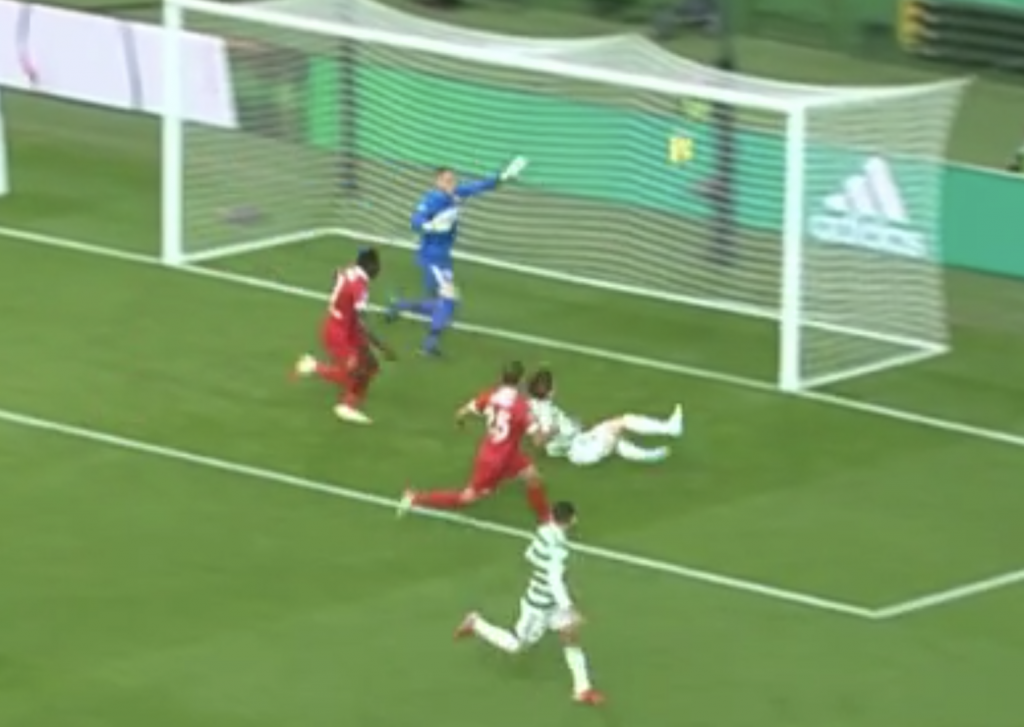 EURO STAR…Kyogo Furuhashi slams the ball into the roof of the net for the opening goal.

Understandably, the tempo dropped off and AZ Alkmaar came more into the contest with some clever thrusts to keep the Hoops defenders on their toes.

The opposition paid skipper Callum McGregor the ultimate compliment of having one of their players practically wearing the same shirt. Nevertheless, the cultured midfielder was still playing his part in a crucial confrontation.

In the 47th minute, Dani De Wit was the first player to be booked when he blocked off Rogic with a wayward outstretched arm to the Aussie’s face.

A couple of minutes later, Starfelt failed to cut out a ball into the box and Welsh was forced to make a goal-saving challenge. The ricochet fell to full-back Thijs Oosting who blazed over the bar from eight yards. It was a lucky break for Celtic and, worryingly, another moment of anxiety created by the Swede.

In the 58th minute, Odsonne Edouard came on for Abada with Kyogo switching to the left and Forrest moving to the right.

Three minutes later, the Hoops doubled their advantage and this time Kyogo turned provider as he set up Forrest inside the box. The winger swivelled to fire in a shot from 12 yards and it took a wicked deflection off defender Timo Letschert to wrong-foot the helpless keeper on its way into the net. 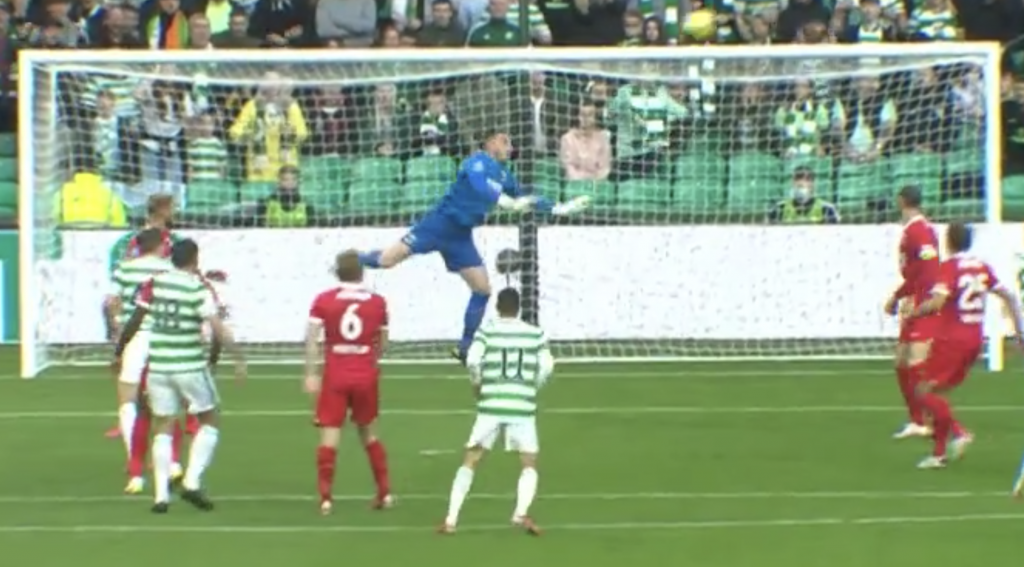 DUTCH AND GO…keeper Hobie Verhulst pushes away a drive from Tom Rogic.

It was a slice of good fortune for Posetcoglou’s side and only moments later Anthony Ralston, bizarrely booked for time-wasting shortly beforehand, made a frantic dash to the near post to cut out a low ball from the right with an AZ Alkmaar player poised to pull the trigger from four yards.

In 72 minutes, Edouard and Rogic combined for the Aussie to attempt a dipping, serving effort from 25 yards, but once again the keeper pulled off a fine save.

Two minutes later, Kyogo and Rogic, who had given their all, were replaced by James McCarthy and Adam Montgomery as Postecoglou added industry to the middle of the park.

McCarthy was welcomed to the action with a yellow card after a mid-air clash with an opponent. It looked soft.

ON THE REBOUND…James Forrest watches as his deflected shot leaves the keeper helpless.

There was an astonishing sequence of near-misses in quickfire succession when Edouard fired in a Turnbull cutback from the right. Verhulst blocked the effort, the Frenchman followed up with a header and once again the keeper pushed it away. It fell to Montgomery whose header was blocked on the line by a frantic defender.

In the 88th minute, Turnbull was replaced by Ismaila Soro with Celtic happy to hold what they had.

Five minutes of stoppage time came and went and the Hoops know they face a testing 90 minutes in the Netherlands next Thursday.