TWO-GOAL Kygo Furuhashi delivered the first trophy of the Ange Postecoglou era as normal service was resumed at Hampden this afternoon.

The Hoops were stunned as Hibs took the lead with their first attack in the 50th minute, but they responded magnificently when the Japanese frontman equalised in quickfire fashion before supplying a sublime finish to net the winner in the 72nd minute.

And it was Joe Hart to the rescue in the fading moments of six minutes stoppage-time when he got down superbly to his left to beat away an eight-yard drive from Joe Newell that would have kept the grand finale in the balance. 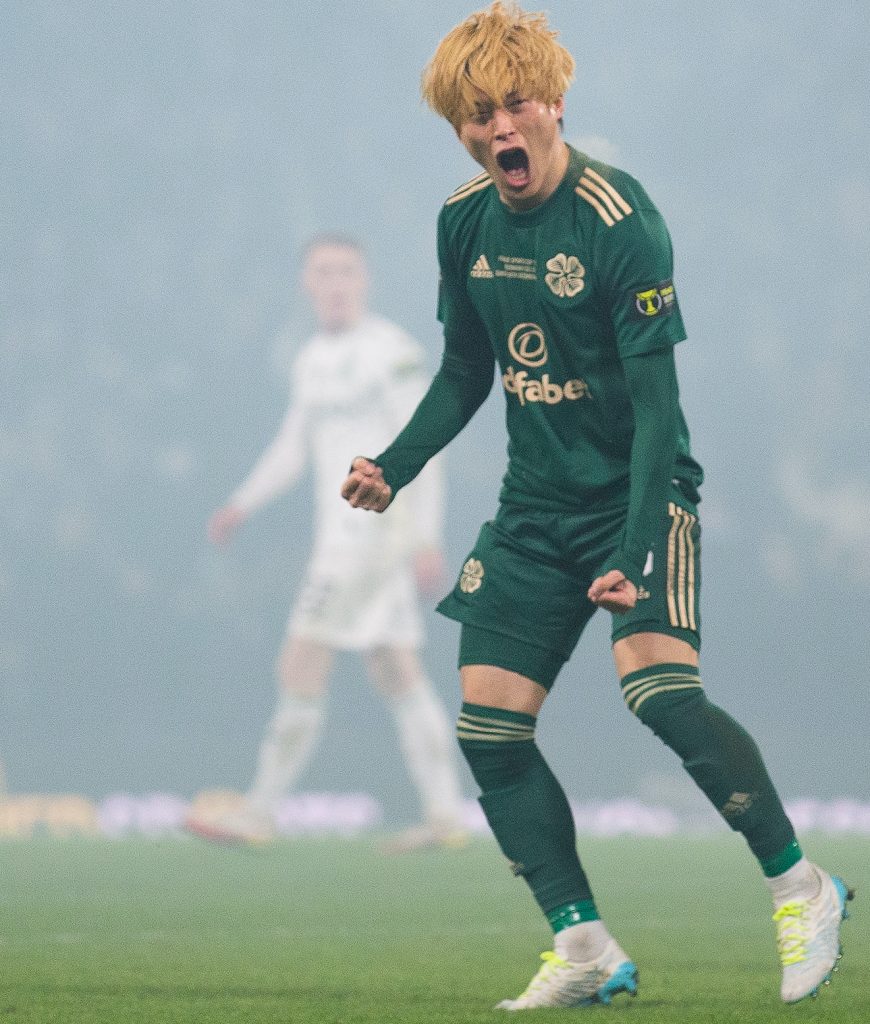 In the end, though, Celtic lifted their 20th League Cup to wipe out the wretched memories of last season’s first trophyless campaign in 11 years.

The Hoops fans thoroughly enjoyed the moment as Hampden rocked at the end of a pulsating 90 minutes-plus as the trophy was prepared to return to the Parkhead boardroom for the fifth time in six years.

Hart was a virtual spectator in the first-half as the Hoops dominated proceedings, but, worryingly, had nothing to show for their efforts.

The nearest to a breakthrough goal fell to Carl Starfelt in the 24th minute when David Turnbull clipped over a left-wing corner-kick. From inside the six-yard box, the Swede had a clear chance, but failed to make clean touch with the ball and half-headed it wide of the far post.

TV Pictures showed a clear push in the back of Greg Taylor by Paul McGinn to send the full-back toppling as he tried to make initial contact. Luckily for the Edinburgh side, the incident was missed by referee John Beaton and his assistant. 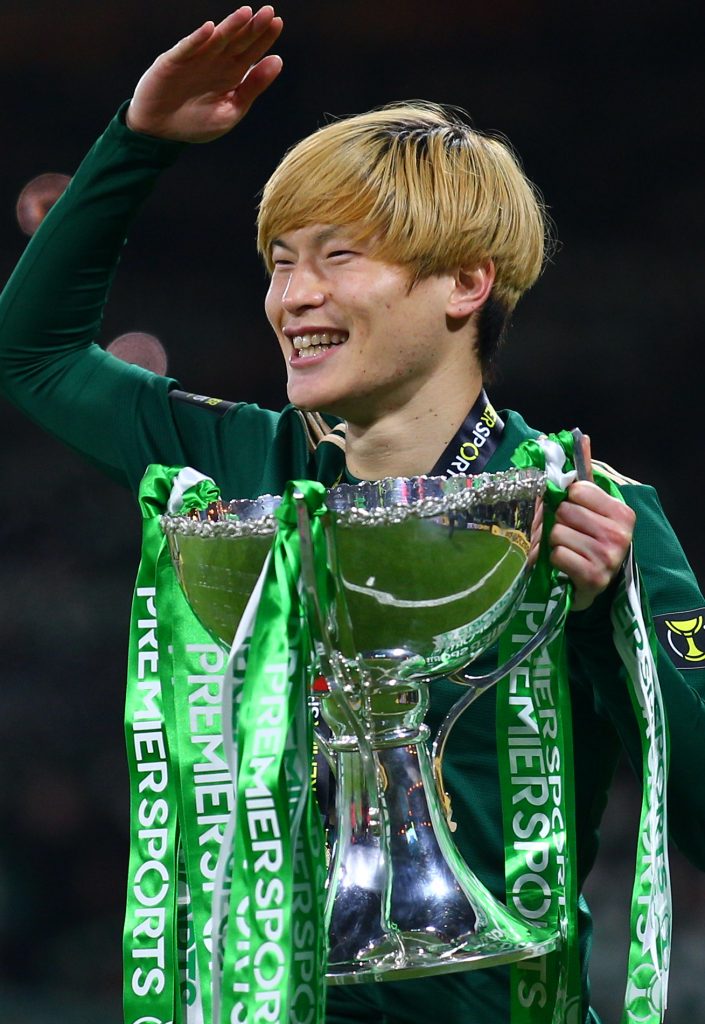 The Hoops, as usual, enjoyed the bulk of possession, but the final pass often went astray much to the relief of their opponents who spent most of the 45 minutes on the back foot.

There was another near thing in the 15th minute when Taylor appeared on the right to cut in onto his favoured left foot and he let fly from outside the box. Keeper Matt Macey had to look smart to get down to his left to parry the dipping effort.

The ball spun into the air with Liel Abada and Kyogo in pursuit, but the farside assistant was quick to signal for offside.

The little Israeli winger was welcomed to his first Cup Final in Scotland with a crash-tackle from Lewis Stevenson in the second minute. It left the Celt on the turf, but, astonishingly, ref Beaton did not produce a yellow card. It was a bookable offence all day long.

Mikey Johnston was eager to make his mark on the occasion, but, frustratingly, a lot of moves were breaking down at the winger with his final pass failing to hit the target. 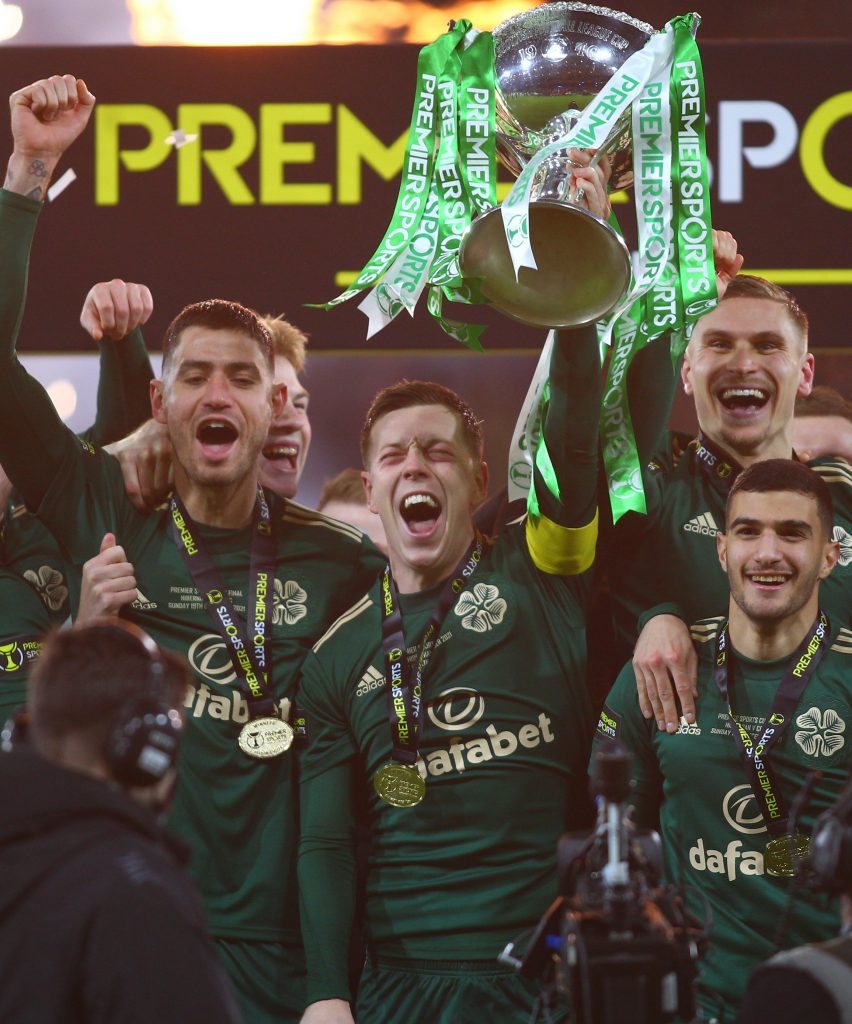 CAPTAIN’S ROLE…Callum McGregor displays his joy after the win over Hibs as Celtic celebrate the return of the League Cup after a year’s absence.

That was also the case in the 13th minute when he cut in from the left leaving two defenders in his slipstream, but his right-foot shot was wayward and flew well wide.

The first booking of the day was dished out to Josip Juranovic for a challenge on Martin Boyle in the 35th minute. Ange Postecoglou threw his hands in the air in annoyance, considering Beaton’s reluctance to produce a yellow card for Stevenson earlier in the match.

Jake Doyle-Hayes and Kevin Nisbet quickly followed for fouls on Kyogo and substitute Nir Bitton who had replaced the limping David Turnbull in the 27th minute.

The Hoops were in the ascendancy after the interval, but were stunned when the Easter Road club took the lead. Carl Starfelt gave away a needless corner-kick on the right and Boyle swung the award into the mix. 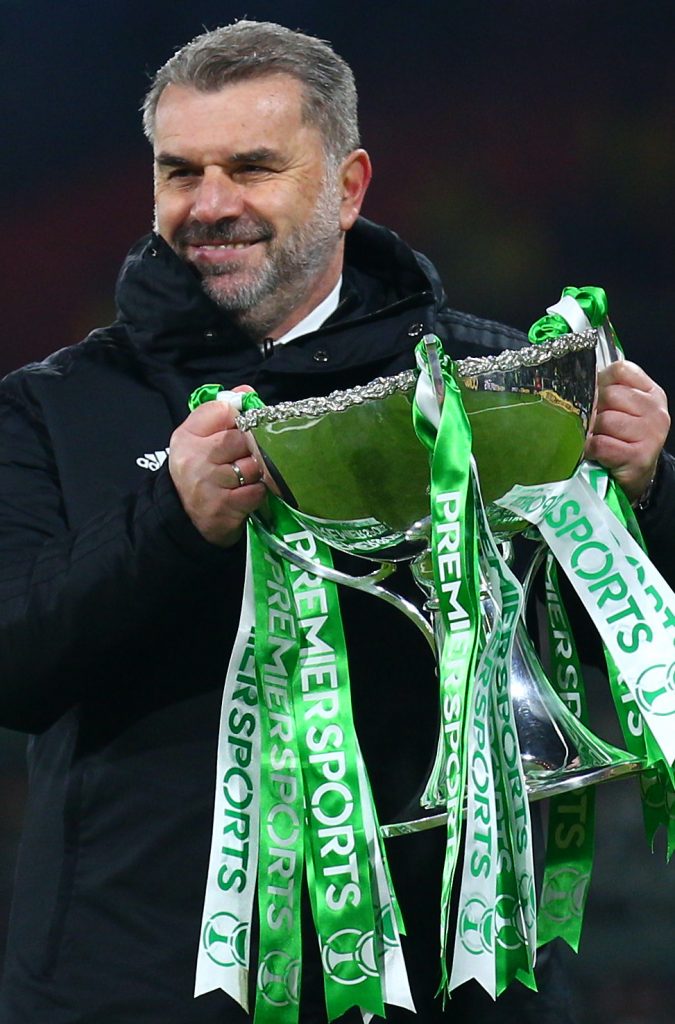 Alarmingly, the Swede allowed Paul Hanlon to outmuscle him into a great position and the defender thumped a header away from Hart. Juranovic made a last-ditch attempt to clear, but it it was obvious the effort had crossed the line.

The response from Postecoglou’s players was instantaneous. Celtic were level in just over a minute.

Callum McGregor, who put in a real captain’s performance. picked out the ever-dangerous Kyogo with a sweeping pass from the left.

The talismanic fans’ favourite raced through the static defence, took a touch to tame the ball and another to sweep it low past the startled Macey.

It was an exquisite moment combining quick-thinking from the skipper and some breathtaking control and finishing skills from the frontman. 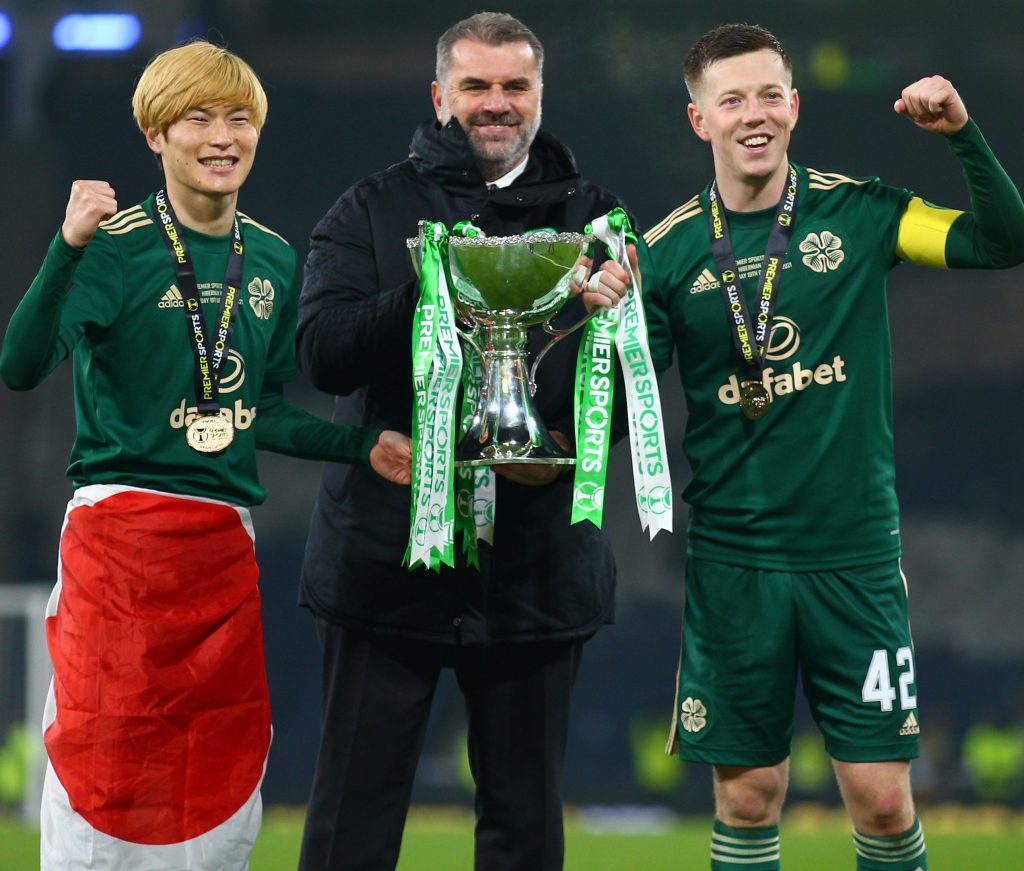 And it was Kyogo who provided the winner – his 16th strike of the season – when he claimed the winner in the 72nd minute.

Credit must go to Rogic for a quick free-kick after Hanlon had fouled Abada. The Aussie placed the ball on the spot, waited for the whistle and sent a ball into the path of Kyogo while the Hibs defence switched off for a fateful moment.

Once more the touch was excellent and the pacy frontman didn’t even bother to look up as he lifted the ball with graceful ease over the outrushing figure of the towering Macey.

Hampden was hushed for a heartbeat as the ball swirled in the air and then the stadium exploded in delight as the object sailed unerringly towards its final destination.

It was a goal fit to win any game. 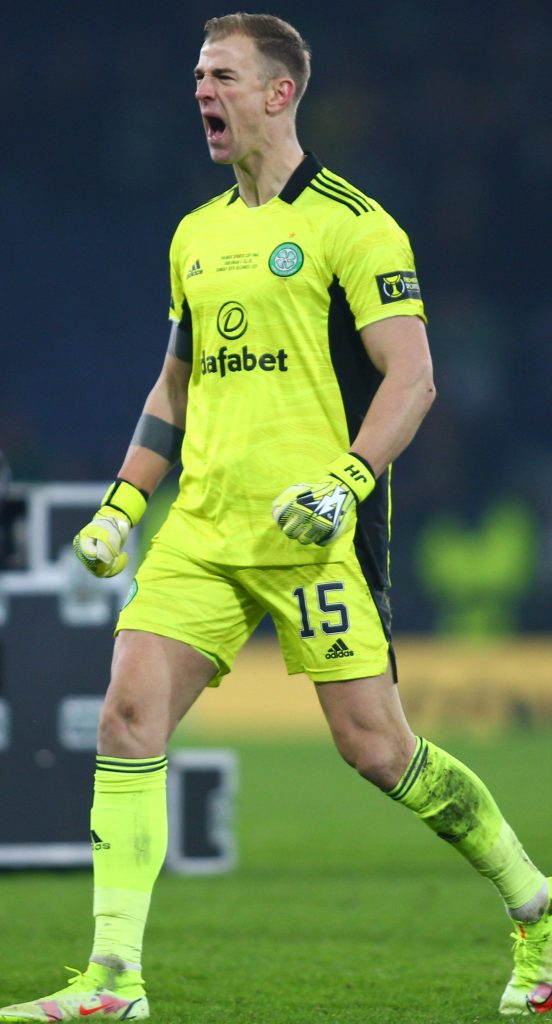 HAMPDEN ROAR…jubliant Joe Hart celebrates with the Celtic fans after the Hampden triumph.

Postecoglou replaced the limping Taylor with Anthony Ralston in the 75th minute with Juranovic moving to the left and eight minutes later the Greek-Australian gaffer made a double change with Liam Scales and Owen Moffat coming on for Johnston and goal hero Kyogo.

In the 85th minute, Rogic had the opportunity to put the game out of sight, but his measured strike after great work by Moffat and Abada was saved low down at his left-hand post by Macey.

It was a question of seeing out time, but not before Hart had made a daring save from Kevin Nisbet after Starfelt had been turned inside out by the forward.

And the Edinburgh striker was out of luck again when a header struck the post and Hanlon blazed wildly over from close range as the Hoops rearguard lived dangerously.

As the minutes ticked down, Hart showed his undoubted quality yet again when he repelled a drive from Newell.

From that moment on, Celtic’s name was on the Cup.

What a welcome for Ange Postecoglou, Kyogo and Co.

The miserable year of 2021 had a silver lining, after all!