Celtic Quick News on News Now
You are at:Home»Match Report»CELTIC 2 LAZIO 1: EVERYONE A HERO AS JULLIEN IS HOOPS’ LAST-GASP WINNER
By CQN Magazine on 24th October 2019 Match Report

IT was a night for heroes in Paradise as Celtic came roaring back to pick up three points against quality Italian opponents in an exhausting and emotion-charged Europa League Group E encounter.

Ryan Christie had pulled back Lazio’s half-time lead and then Christopher Jullien rose majestically in the 89th minute to bullet in an unstoppable winner from a right-wing corner-kick.

In the fading moments the mantle was handed over to Fraser Forster to make a stupendous diving save from a netbound effort from substitute Cataldi that was heading into the corner of the net.

It was joyous bedlam when the Croatian referee eventually blew after five minutes of frantic stoppage time to bring to a halt a night of drama, commitment and courage from the Hoops.

Christie’s industry and invention was quite breathtaking as he popped up all over the pitch in an immaculate performance.

CHRISTOPHER’S CRACKER…Jullien rises high to bullet in the winner.

Five minutes before the interval, Celtic were hit by a classic suckerpunch as the Italians broke forward at speed and the end product was Manuel Lazzari thumping an angled drive past the exposed Forster.

Christie had a shot charged down, Boli Bolingoli was caught up the pitch in support, the ball was moved upfield with bewildering pace and Kristoffer Ajer was in two minds about coming out to make the initial challenge. It was a fatal hesitation.

The ball was played beyond him and Lazzari, who had looked alert all night, snapped onto the pass, took aim and there was nothing Forster could do as the ball ripped past him into the net. 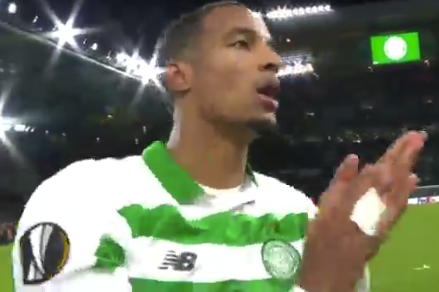 CELEBRATIONS…Christopher Jullien is exhausted – but happy.

It was a sore one for the Hoops to take, but so typical of Italian opponents who had been looking for such an opening right from the off.

Celtic had started brightly and Christie had the fans off their seats in the 16th minute when it looked as though he had hit a winning shot from 25 yards. The playmaker caught the ball sweetly with his left foot after it had broken to him, but, although it left the keeper helpless, the effort zipped just a couple of feet wide of the left-hand post.

Nine minutes later, Odsonne Edouard and Christie combined to set up James Forrest inside the box, but he dithered with his final shot and was robbed and the chance was gone.

Bolingoli bailed out his defensive mates with a neat interception and then a hared across the back four to keep possession before finally passing the ball to Christie to clear up a dangerous situation. 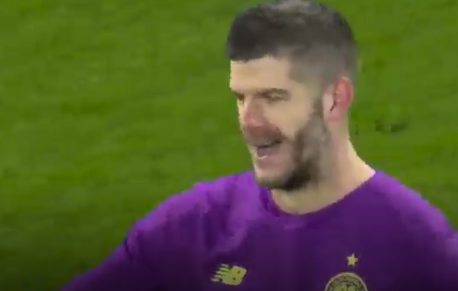 ALL SMILES…hero keeper Fraser Forster at the end.

Hatem Abd Elhamed was pressing wide on the right while Forrest appeared to take the ball into traffic where he invariably ran into trouble.

Edouard had a fleeting glimpse of goal, but a well-timed block from Bastos thwarted him. That appeared to be the story of the night for the French ace as defenders converged upon him any time he accepted a pass.

Into the second-half, Neil Lennon would have asked his men to start at a high tempo, but Lazio, equally, were set out to make sure they were satisfied with the pace of the game.

In the 65th minute, Tom Rogic was introduced for Elyounoussi who had been booked and was also toiling to make an impact.

Two minutes later came the remarkable breakthrough. Forrest and McGregor combined to set up up Edouard on the left-hand side of the box. He cut the ball back for the relentless Christie and he wonderfully swept a first-time drive from 16 yards over the keeper’s left shoulder for the equaliser. It was an incredible execution and well deserved for a player who had been buzzing from kick-off.

A BIG HAND…Christopher Jullien and Ryan Christie applaud the fans.

The game swung from end to end making it exciting and nerve-wracking in equal measures.

Before Christie’s goal, Lazio had hit the post in the overall melee and then the playmaker set up gallant skipper Scott Brown for a shot from the edge of the penalty area. The skipper hit it sweetly, but it was diverted for a right-wing corner-kick.

There were 89 minutes on the clock when Christie raced to take it. He swung the ball into the middle of the goal and Jullien rose superbly to meet the ball smack on the forehead and keeper Thomas Strakosha didn’t even move as it raged into the net.

Celtic Park erupted in delight and they were still celebrating when Forster, who had made an earlier excellent save to deny Marco Parolo, threw himself to his right as the whizzbang attempt from Cataldi was zooming towards its destination. The save almost brought the roof down.

Now all eyes are on Rome in a fortnight’s time when we meet again. It won’t be dull.