RAMPANT Celtic completed a perfect dozen in the Premiership as they clocked up their 12th successive home triumph while they mercilessly swept aside St Johnstone at Parkhead this evening.

At the same time, the champions strode six points clear at the top of the table and there was never a chance they were going to fluff their lines on this occasion.

A two-goals-in-two minutes salvo from the champions shortly after the break edged them ever closer to that eighth successive title.

Bright Bhoys Callum McGregor and Ryan Christie were the men who mattered with the goals, but once again Brendan Rodgers will have been delighted with a professional performance from his team on a night where they had to ally patience with awareness.

As early as the 14th minute, Celtic came close to breaking the deadlock with a sublime Christie free-kick from just outside the box.

Murray Davidson flattened the threatening James Forrest with a wayward challenge from behind and referee Greg Aitken had no option but to signal the award.

Christie lined it up carefully before curling the ball up and over the wall and keeper Zander Clark was left motionless. It looked as though the effort was swirling into the top left-hand corner until it took a late swerve and dipped wide of the target. 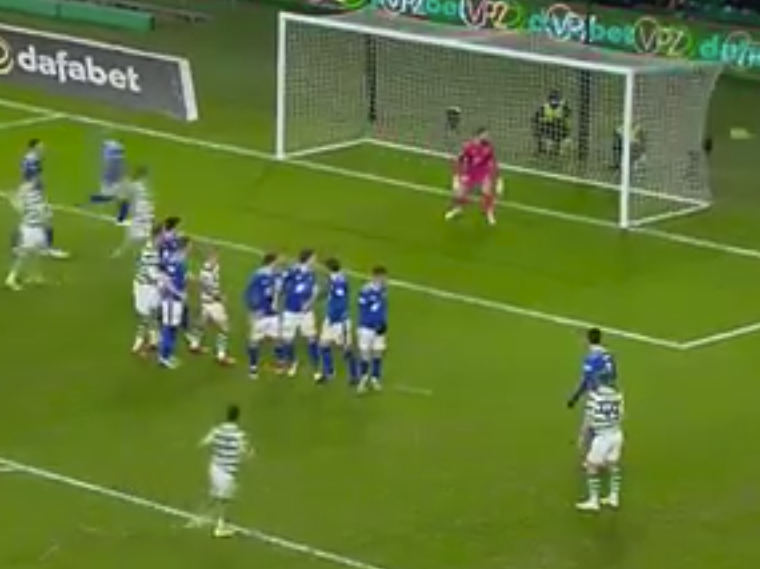 SO CLOSE…Ryan Christie, on the 18-yard line, leaves St Johnstone keeper Zander Clark stranded with a free-kick that just misses the target.

A minute later, a promising move came to a halt when Emilio Izaguirre disappointed with a left-wing cross and it was easy for the Perth No.1 to pluck the ball out of the air.

The Hoops turned the screw and Oliver Burke had a shot blocked by the lunging Joe Shaugnessy when a pass to Scott Sinclair on his left was the better option.

In the 27th minute, Sinclair, with six goals in his previous six league games, almost made it seven when he got on the end of an Izaguirre cross that was a lot more dangerous than his earlier attempt.

The English raider’s timing was superb as he rose to thump in a header, but he was denied by an astonishing one-handed save by Clark who leapt spectacularly to his right to beat the ball away. 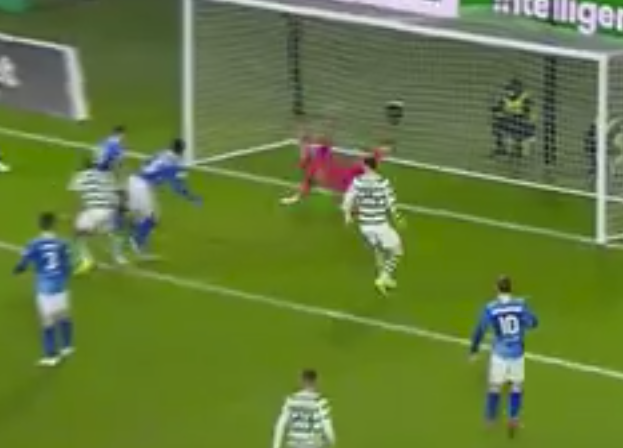 DENIED…Scott Sinclair, on the six-yard line, sees his header saved by the diving Zander Clark.

Six minutes afterwards, Burke showed the sort of form that has seen him clock up two transfer fees totalling almost £30million when he turned in from the left, took the ball to his right foot and sizzled in a low drive from the edge of the 18-yard box.

Clark threw himself more in hope than expectation to his left, but, unfortunately, the ball zipped just wide of the far upright.

Then it was Scott Brown who was next up to have a go from 20 yards and the skipper’s shot flew over the crossbar. With a bit more precision, the skipper might have claimed his 38th Celtic goal.

The home fans raged at the match official when he failed to book Davidson for a cynical foul on Sinclair as the Hoops broke forward in a promising move. In fact, there was only one yellow card in the opening 45 minutes – to Ryan Christie for diving.

Frustratingly, the first-half ended goalless with the champions having the bulk of possession and the visitors, as anticipated, sitting back and hoping to hit on the break.

There was a familiar pattern to proceedings after the turnaround when Shaugnessy cleared a left-wing cross from Christie with Burke poised to pounce and then the Highlander’s direction was well off-beam when he tried his luck with a right-foot effort from outside the box and it blazed wide.

In the 52nd minute, the classy midfielder had another go at goal and this time he was denied by a smart save from Clark. The fans wondered when they would witness the breakthrough goal – they got their answer 60 seconds later.

McGregor, who had looked clever and lively from kick-off, picked up a ball from Mikael Lustig and drove a left-foot shot from outside the box low past the despairing keeper.

The supporters were still celebrating when Christie got the goal he had been threatening to notch in the 55th minute.

This time he would not be denied when he turned and twisted in the box and his left-foot effort whipped high beyond Clark who didn’t stand an earthly. 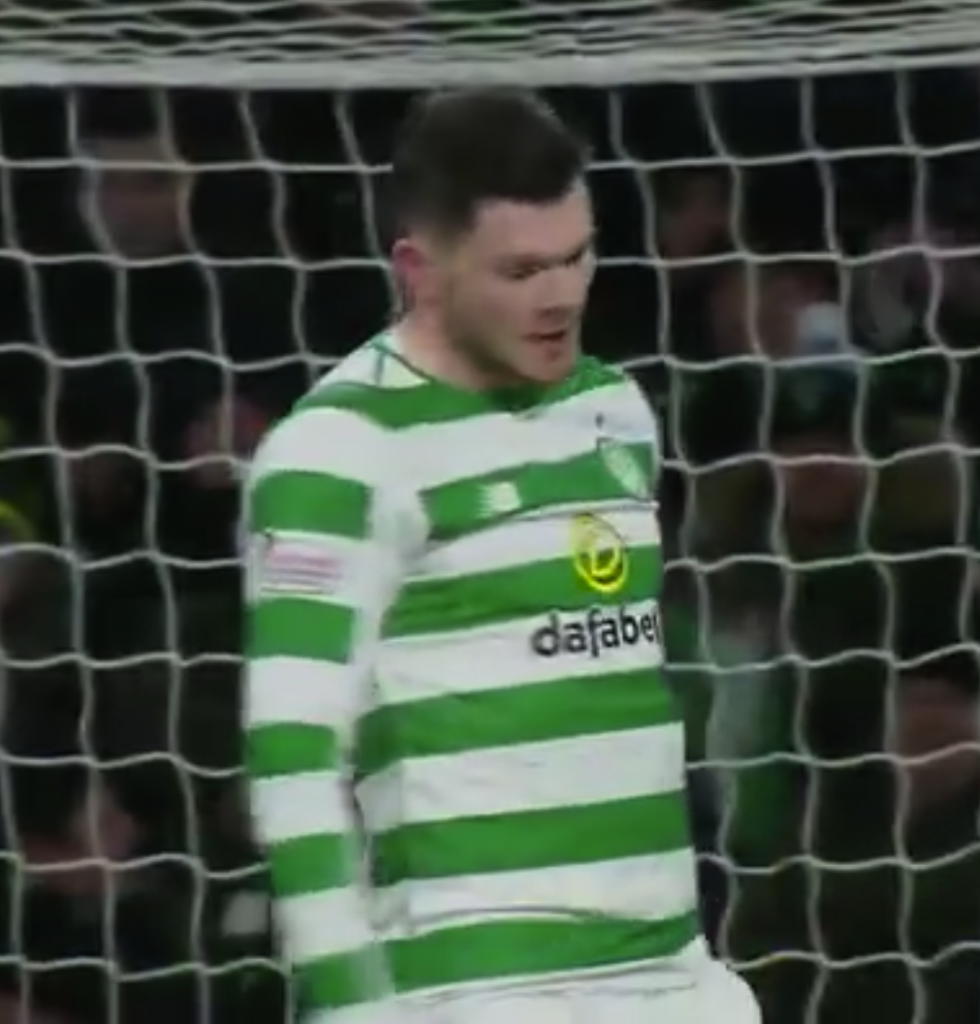 NOT THIS TIME…Oliver Burke, a two-goal scorer against St Mirren last week, was out of luck against St Johnstone.

Celtic were then lining up to have shots at the Saints goal as they took total control against opponents who had shed some of their resolute attitude. They knew there would be no way back.

Rodgers freshened things up when he sent on Odsonne Edouard and Timothy Weah for Burke and Sinclair.

It didn’t take long for the 18-year-old American, on loan from Paris Saint-Germain, to attempt to make an impact as he scorched in a low drive from outside the box that was well gathered by Clark at his right-hand post.

Shortly afterwards, Edouard showed some fabulous trickery to open up an opportunity, but his final effort was blocked by the overworked custodian.

Nir Bitton was given a large cheer when he came on near the end for Christie who had once again shown his class, especially with his goal.

Clark then thwarted McGregor with a fine diving save and the the visitors escaped a call for a penalty-kick when Richard Foster blocked a Forrest cross with his hand.

So, that’s the first of the hat-trick against St Johnstone taken care of. The triple-header continues in the league at Perth on Sunday and then it’s back to the east end of Glasgow the following Sunday for a Scottish Cup encounter.

Looks like a treble yell is on the way!