THE Celtic juggernaut thundered to within 90 minutes of an unprecedented treble treble as they dismissed and dismantled Aberdeen in an extraordinary Scottish Cup semi-final encounter at Hampden this afternoon.

Goals from James Forrest, Odsonne Edouard, with a penalty-kick, and Tom Rogic set up the potential historic grand finale at the national stadium on May 25.

It was explosive right from the start and the Pittodrie battlers completed the spectacle with nine men following the dismissals of Dom Ball and Lewis Ferguson while manager Derek McInnes and his assistant Tony Docherty were also sent to the stand.

It became a procession before the end and now only Hearts stand between this Celtic team and a place in the Annals of Fame.

The opening goal from James Forrest was simply breathtaking as he shimmied his way into a fabulous position before unleashing a spectacular and unstoppable effort into the roof of the net. 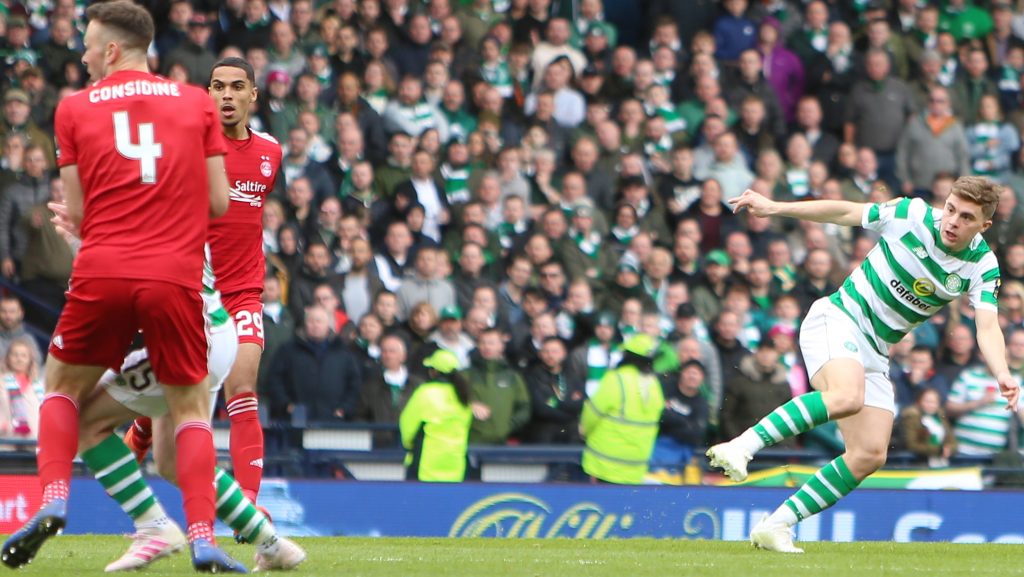 Before that unforgettable strike, the game had been marred by a sickening clash of heads in the 36th minute that saw the unfortunate Ryan Christie stretchered off after a six-minute delay – and Dons defender Ball banished.

The Pittodrie player, who had been booked earlier, challenged in such a wayward manner that the young Celt was left unconscious and referee Craig Thomson went once more to the top pocket for a second yellow card.

There were worrying moments before the stretcher was brought on and Christie was ushered off while Rogic was immediately sent on in his place.

Five minutes later, Forrest worked his magic and finished off with a goal that lit up Hampden and left the Dons with an uphill struggle. He spun away from his marker Max Lowe 25 yards out and his finish was a thing of beauty.

Amazingly, the winger had the chance to double his side’s advantage when when Edouard slipped him in with a neat pass and the Scotland international whipped in a low drive. On this occasion, though, Lewis spread himself and blocked the effort.

Celtic went in at half-time with a deserved advantage and they could have even been out of sight after a whirlwind start.

Jozo Simunovic meandred forward from defence and just kept on going until he reached the danger zone and, after a neat step-over, opened up the opportunity the chance for a shot. 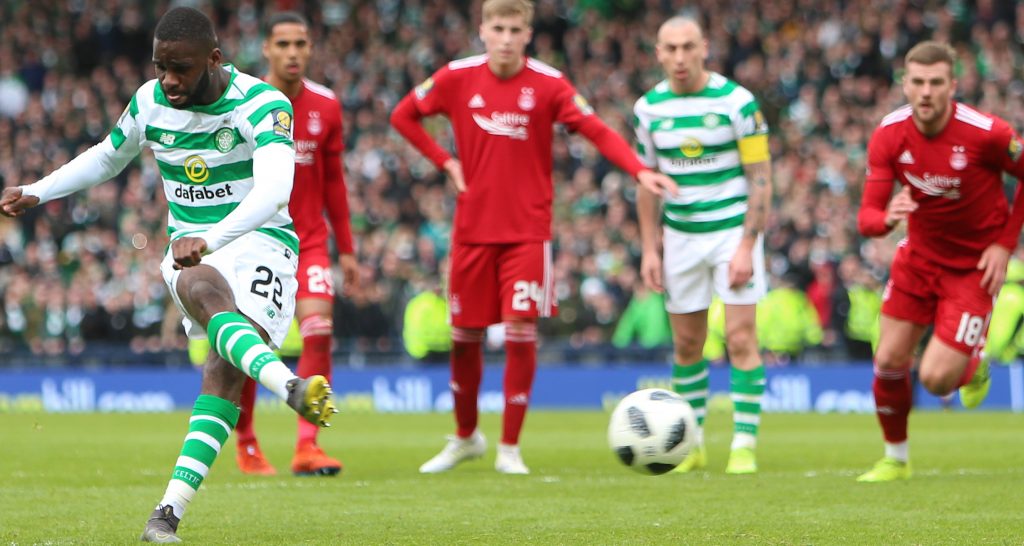 NUMBER TWO…Odsonne Edouard makes no mistake from the penalty spot.

The Croatian defender zipped in a 25-yard effort that was destined for the keeper’s bottom left-hand corner, but Lewis reacted brilliantly to launch himself across his line to touch the ball round the post for a corner-kick.

And from Christie’s right-wing delivery, the ball dropped to the unmarked Simunovic’s feet only yards out, but, unfortunately, he managed to screw the ball off target.

Match official Thomson amazed everyone when he booked Forrest for a dive on the edge of the box in the 23rd minute when it had been obvious he had been tugged back by Andy Considine.

Hot-headed Ferguson was fortunate not to pick up a caution after quickfire fouls on Scott Brown and Kieran Tierney.

In the 25th minute, the Hoops left-back slalomed through the retreating rearguard to set up Edouard, but his drive was blocked by Scott McKenna.

Ball was then booked for taking out Jonny Hayes before seeing red for his mid-air collision with Christie.

As Ball trudged towards the dressing room, Dons boss Derek McInnes made a swift change with central defender Mikey Devlin going on for Stevie May. 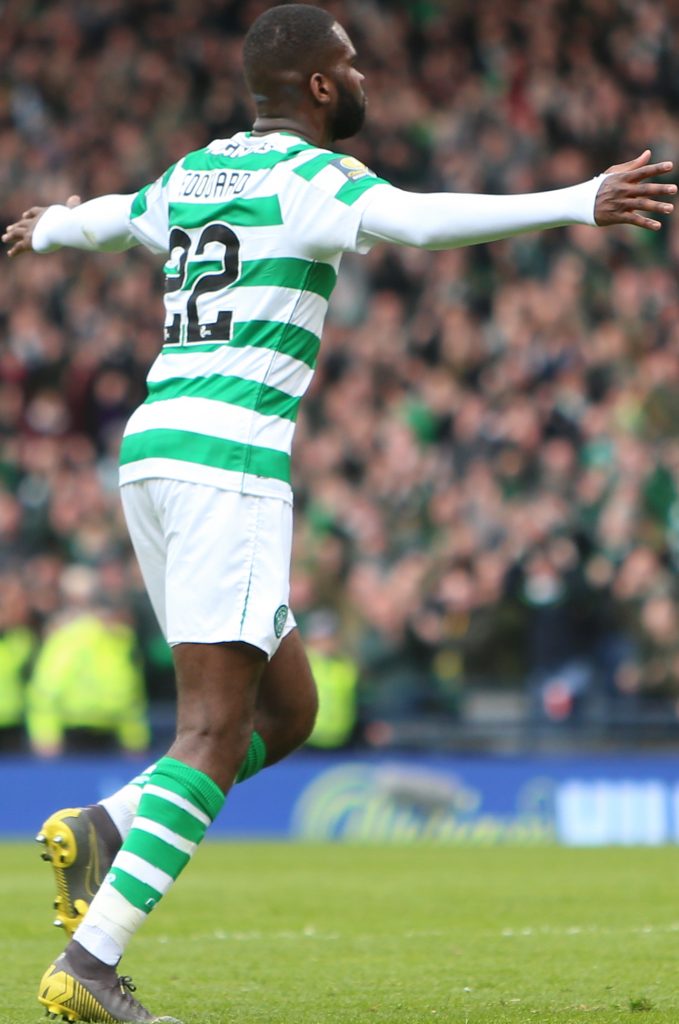 FRENCH FANCY…Odsonne Edouard races away in triumph after slotting in the spot-kick.

Just before the half-hour mark, Callum McGregor slipped his marker to curl in a drive that swept over the crossbar.

After the interval, on the hour, Ferguson escaped again as he manhandled Edouard as a ball came in from the right. The ref awarded the Dons a free-kick!

However, two minutes later, the French ace was involved again – and this time he was smiling.

Devlin flattened Hayes in the box as the hard-running Irishman bore down on goal. The referee didn’t hesitate when he pointed to the spot.

Lewis saved from Scott Sinclair in the League Cup Final in December, but there was no way he was going to stop the £10million attacker.

With supreme confidence, Edouard displayed a fair degree of nonchalance as he swept his effort low past the outstretched keeper.

And only moments later, Ferguson was given a straight red card for a disgraceful lunge at Rogic. The youngster had been barging around all day and deservedly got his marching orders for a diabolical assault on the Aussie.

In the 69th minute, Rogic had the last laugh when he netted a classy third goal to make the triumph a little sweeter.

Mikael Lustig thumped a 25-yard free-kick into a red wall of defenders before retrieving the rebound and rolling it to his right to the Wizard of Oz.

From 25 yards, Rogic, with astounding precision, breezed a left-foot curler low past Lewis at his left-hand post. 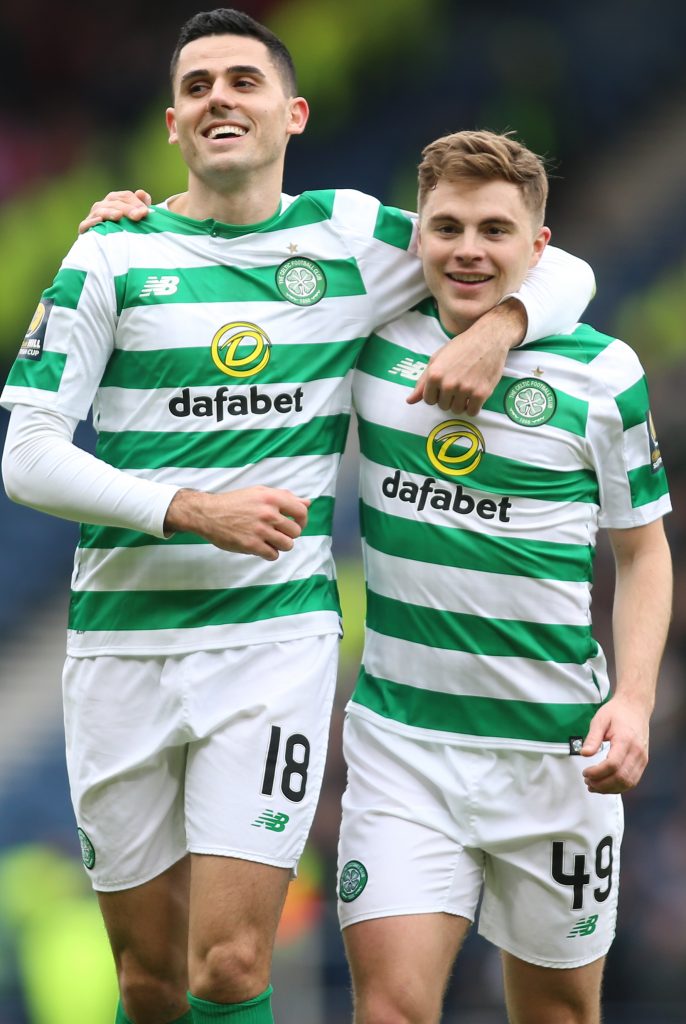 The overworked referee, who had earlier sent assistant boss Docherty to the stand for remarks at the interval, also banished McInnes in the 74th minute in an afternoon of shame for the Pittodrie outfit.

As the disgraced Dons gaffer went off, Lennon sent on Timothy Weah and Scott Sinclair as subs for Forrest and Hayes who went off to warm applause from appreciative fans of the champions.

Now Celtic are within an hour-and-a-half of completing a silverware cleansweep – NINE successive domestic honours – that will surely never be emulated.

All eyes are now on Hampden on May 25, the 52nd anniversary of the club’s greatest feat by conquering Europe in Lisbon.

It looks as though they are about to be joined in the history books with another Celtic line-up.