CELTIC’S Champions League dreams were shattered on a disaster-strewn evening when they conceded FOUR goals at a stunned Parkhead against the Romanians.

It was an unbelievable night under the lights in the east end of Glasgow as the Hoops, for the second successive year, squandered the opportunity to get through to the play-offs where they would have faced Slavia Prague for the right to perform in the lucrative group stages.

The fans could hardly believe what they were witnessing as the game ebbed and flowed at a furious tempo before Cluj made absolutely certain with the last kick of the ball in stoppage time. James Forrest, Odsonne Edouard and Ryan Christie netted excellent goals, but in the end they counted for nothing.

It was a cruel and painful exit for Neil Lennon’s men who paid a heavy price for some slack defensive play and the grateful visitors were only too happy to cash in.

Now the Hoops will face the Europa League play-off instead of a duel for a place in Europe’s glamorous and elite tournament. Next up will be either Sherrif, of Moldova, or Sweden’s AIK with the latter leading 2-1 going into Thursday’s second leg. 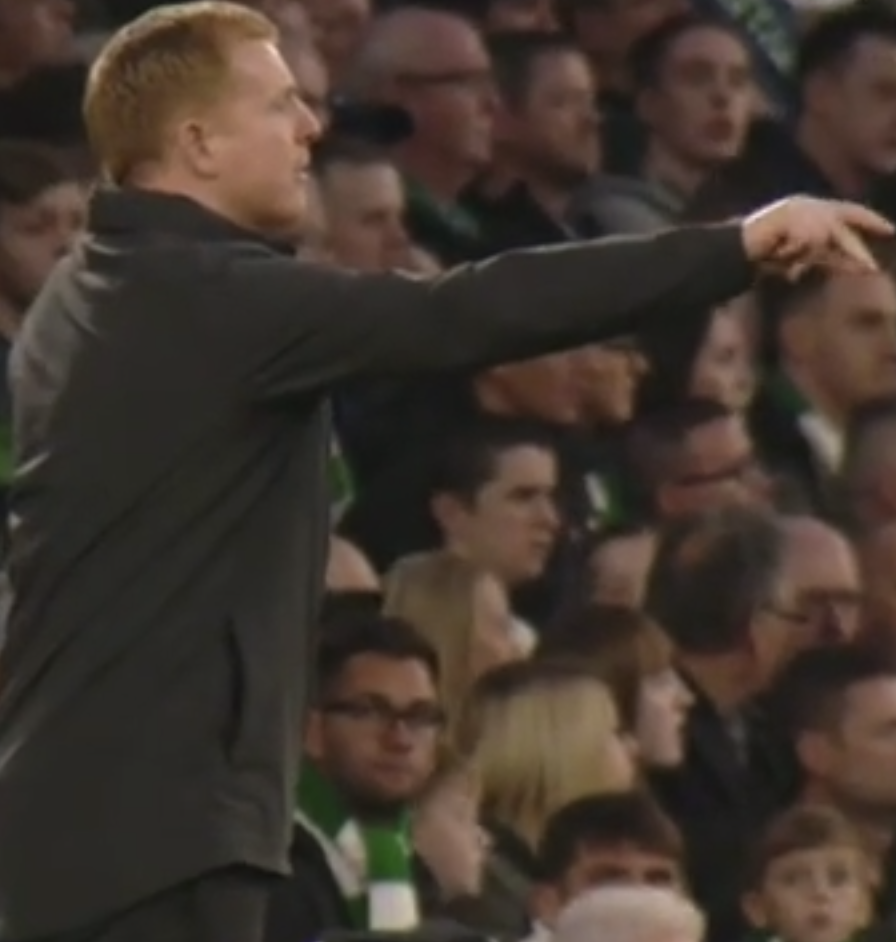 The Romanians, with six players aged 30 or over, were eager to make an impression early in the game and swarmed around in their determined efforts to make certain the home side did not settle into their rhythm or get comfortably into their stride.

In nine minutes there was a scare when a hopeful ball from Billel Omrani on the left found Ciprian Deac lurking at the far post, but Callum McGregor, starting the tie in a deep left-sided role, got back to challenge and the the opportunity was lost.

Within a minute, Edouard fashioned some space on the edge of the box as he worked the ball to his left foot, but his drive was blocked and dropped into the welcome arms of keeper Arlauskis.

There was a brief glimpse of menace from Forrest after a good run down the right by Christie, but the winger’s low effort was blocked by a sprawling defender.

Hatem Abd Elhamed drew applause from the fans when he took a difficult ball, controlled it instantly and rampaged past an opponent, but once again the move came to nothing with the Cluj defenders mopping up the threat.

In the 26th minute, Mikey Johnston drove at the backtracking Cluj rearguard before whipping in a right-foot drive from just outside the box, but the ball hurtled just wide of the keeper’s left-hand post.

Moments later, the Romanians struck to take the lead with a remarkably simple goal that once again exposed weaknesses in the Hoops defence in dealing with high balls. Omrani was allowed to run away from Scott Brown following a throw-in on the left.

He was allowed time to clip over a cross from the left and Deac got in front of McGregor to knock a header beyond Scott Bain with the ball striking the inside of the post before bouncing into the net.

It was a horrible goal to concede and only too easily the advantage had been handed to the visitors who celebrated the gift from the Scots. 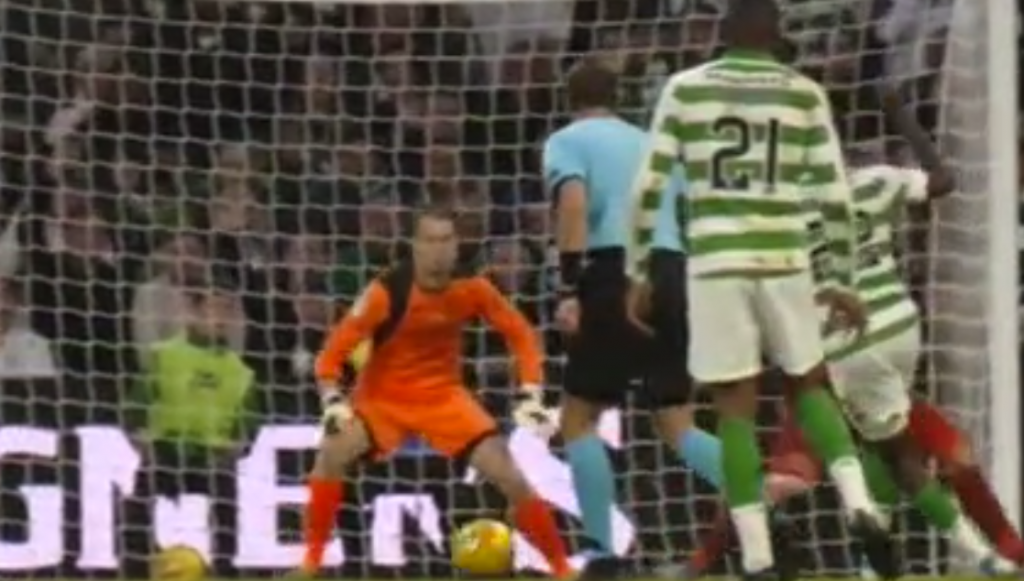 HE SCORES…the French ace’s low drive zips past the keeper for the Hoops’ second goal.

On the half-hour mark, Bain made an unorthodox save as he kicked away a low sizzling 30-yard effort from Damjan Djokovic, but no-one was complaining at his methods as the Hoops survived another scare.

Edouard blew the chance to equalise when he was set up six yards out by Christie after a run on the left, but the Frenchman waywardly blazed high over the bar.

The Latvian referee was allowing the Romanians to put in some extremely dodgy tackles and Rondon eventually saw yellow after his umpteenth foul, but, amazingly, Elhamed joined him  in the book for virtually nothing.

The match official provoked the ire of the fans again when Rondon, only two minutes after being booked, clattered into Kristoffer Ajer to send him tumbling, but the whistler wasn’t interested.

Half-time arrived with Celtic struggling to make a breakthrough against an exceptionally well-organised and robust side and boss Lennon had a lot to sort during the interval.

They hadn’t exactly overworked the Cluj keeper and that would have been a worry for the manager with too few opportunities being carved out against a team only too willing to throw bodies in front of the ball.

Two minutes into the second period, a goal-line clearance prevented Ajer from equalising with a towering header from a right-wing corner-kick and only moments later, from a deadball on the opposite flank, the keeper got down at his right-hand post to push away a header from Jozo Simunovic.

In the 50th minute, Parkhead erupted when the reliable Forrest, the team’s big-game player, equalised after some brilliant work down the left-hand side with McGregor heavily involved.

He raced into the danger zone before delivering an enticing low cross. Edouard stepped over the ball and the Scotland international latched onto it, took a touch, kept control and then fired a shot into the net. It was exquisite in its creation and execution.

Four minutes later, Christie set up Edouard after a neat ball from the left, but the French ace’s quickfire drive just zipped a foot ot two wide of the right-hand post.

In the 59th minute, McGregor burst through, but walloped his finishing effort wide of the target.

Just on the hour mark, rampant Celtic turn the game game on its head as they took the lead. And once again they demonstrated some patience in their lead-up play and the ball was delivered to Elhamed on the right wing.

He slung in a low cross that was missed by two defenders and that was all Edouard needed to latch onto the opportunity and blitz a drive away from the stretching keeper at his right hand.

Celtic piled forward looking for a third killer goal and a flashing cross from Johnston on the left flew across the six-yard line and to safety with Edouard just a couple of strides away.

In the 70th minute, Forrest saw a left-foot sizzler pushed away by the keeper. 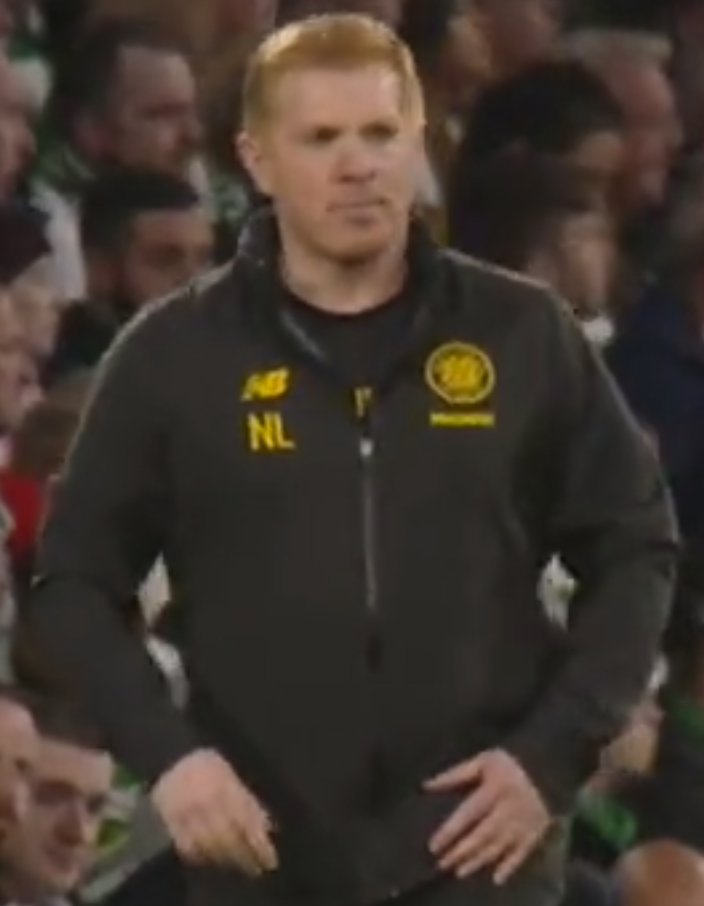 However, there was a real shocker three minutes later when the Romanians were awarded a penalty-kick when the ref adjudged Brown handled the ball as a corner-kick came in from the left. Television pictures proved conclusively the skipper had needlessly given away the spot-kick in a moment of madness.

Omrani sent the ball almost lazily past Bain at his right-hand. The keeper got a touch, but it wasn’t enough to keep it out.

Lennon immediately sent on Lewis Morgan for Johnston as Celtic had to go for it.

Wonderfully, in the 76th minute, Edouard combined with Christie who lashed the ball in at the near corner to put the champions ahead once again.

It was an amazing game against cunning opposition and unbelievably in the 82nd minute they made it 3-3 on the night when Bain pushed away a low shot from the right and Omrani was the quickest to react as he rattled the ball into the roof of the net.

It was a real sickener and two minutes later Leigh Griffiths came on for Ntcham in the 84th minute as Celtic tried to salvage their hopes and moments later Vakoun Issouf Bayo replaced Brown.

However, as the Hoops pressed forward in search of a winner, Cluj sneaked up the pitch and George Tucudean raced away to place the ball behind Bain for the fourth goal.

It could have been a night to remember. Instead, it turned out to be a night that will be difficult to forget.