IT was a case of three and easy for Celtic as they completed an eventul year with an emphatic victory over Dundee United at Parkhead this afternoon.

Goals from Ismaila Soro, David Turnbull and Odsonne Edouard eased the champions to three crucial points – their fourth successive Premiership win – but it could come at a cost.

Unfortunate Christopher Jullien had to be stretchered off after a collision with an upright as he saved a certain goal with a courageous clearance early in the second-half.

The injury took the gloss off an otherwise satisfying performance by Neil Lennon’s side and now they can focus on Ibrox on Saturday when they go into another must-win confrontation. 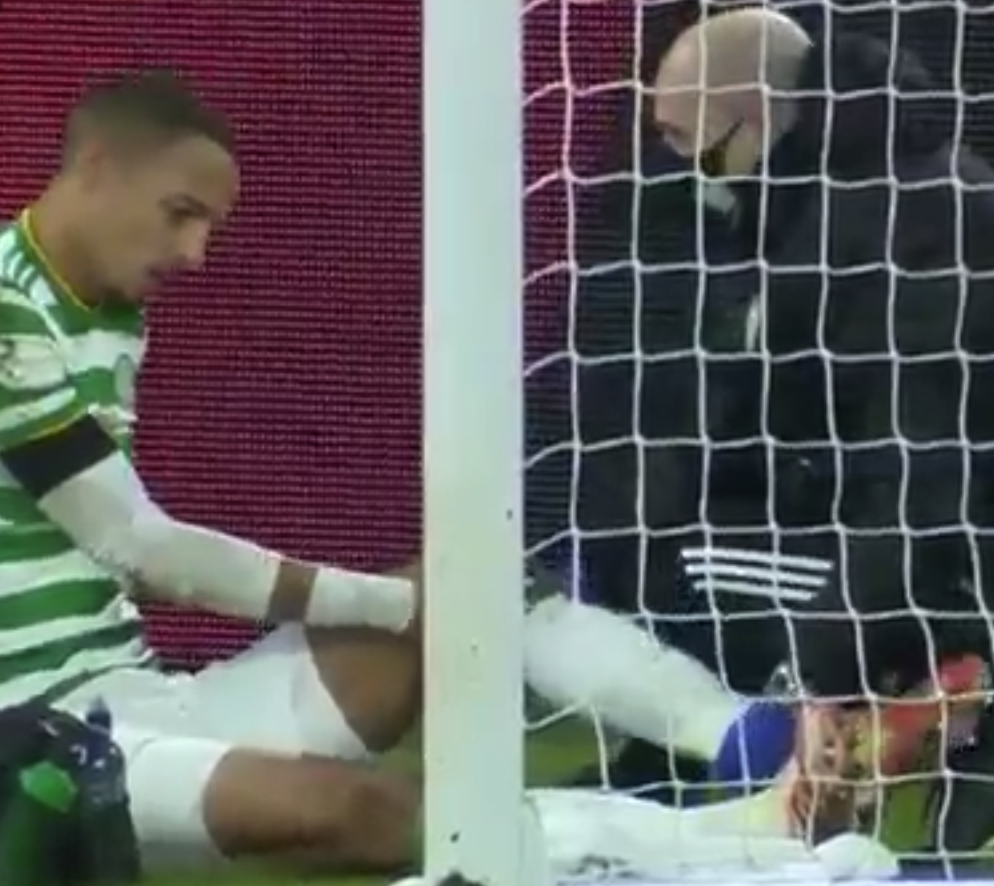 THE LAST POST…Christopher Jullien is treated by physio Tim Wilkinson after clashing with the upright.

The pattern of the game was set in the early moments. In the fourth minute, Edouard swept onto a Ryan Christie pass, waltzed through the retreating United rearguard and performed a couple of step-overs before having a pop at goal.

But his effort was too close to keeper Ben Siegrist who stunned the ball low to his left and scooped up the rebound.

The visitors made no attempt to disguise the fact they were at the home of the champions to suffocate the game and defend in depth with their only hope of a breakaway goal.

That was highlighted in the 11th minute when the eager Jeremie Frimpong raided on the right to pick out Leigh Griffiths, but a posse of tangerine jerseys swarmed around the frontman and the chance was lost.

The Hoops were controlling play with a lot of possession and Christie set up Griffiths with a neat pass to the left bye-line, but his ball across went into the grateful arms of Siegrist.

In the 20th minute Callum McGregor gave another demonstration in how he lacks the art of tackling by giving away a needless foul 10 yards into the Hoops half. The move ended with Peter Pawlett blazing the ball over the bar, but such silly challenges will undoubtedly be punished more severely on Saturday.

BREAKTHROUGH…Ismaila Soro (extreme left) fires in his first goal for the Hoops with a blistering drive.

In the 23rd minute, Soro scored his first goal for Celtic and trust the all-action Ivorian to mark the moment with a special effort.

He was picked out by McGregor, captain for the day in the absence of Scott Brown, and there looked little danger as the anchorman brought the ball forward. The lively midfielder took aim before unleashing a mighty right-foot drive from 25 yards that completely bamboozled Siegrist as it ripped into the net. It was a real belter!

Soro’s beaming smile light up a grey December afternoon in the east end of Glasgow. A delighted Neil Lennon led the applause from the touchline.

Ten minutes later, Turnbull lobbed the ball into the tracks of Griffiths whose first-time volley from 10 yards was brilliantly pushed away by Siegrist and Edouard sliced the rebound wide of the left-hand post. He should have done better.

In the 38th minute, Pawlett picked up the first booking of the day with a cynical trip on the rampaging Frimpong. Referee Willie Collum had no hesitation in displaying the yellow card. 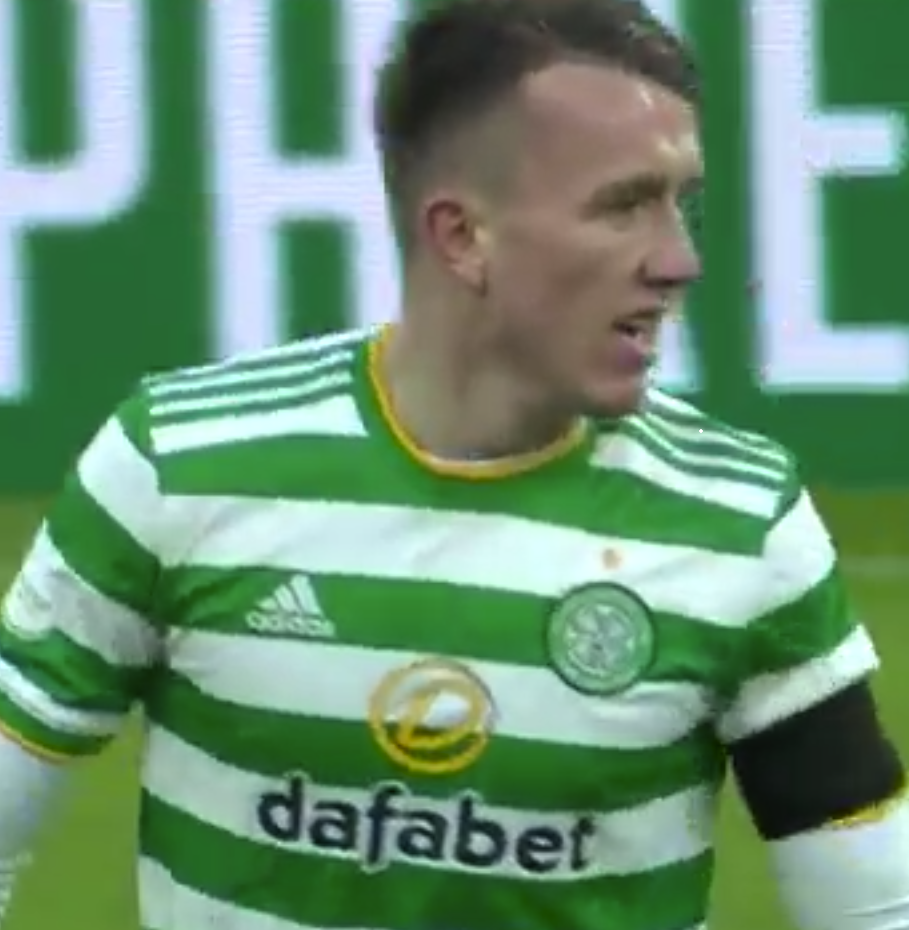 Soro was involved again as he fought tigerishly for possession and set it up for the former Motherwell man who didn’t break stride as he lashed a low right-foot 25-yard howitzer past Siegrist and the ball hammered into the net off the inside of the right-hand post.

Just before the strike there was half-hearted shout from the visitors for a penalty-kick when they claimed a handball against Jullien, but there was no chance the defender could get his arm away from the bouncing ball.

The returning Vasilis Barkas had little to do in the first 45 minutes, but was asked to stretch himself to his left to hold a low drive from Nicky Clark just before the interval.

The second-half started with a scare for the Hoops when the defenders were caught upfield and Marc McNulty broke down the right onto a pass from Lawrence Shankland. Jullien tried desperately to catch up with the forward who enticed Barkas from his line before clipping the balll behind the keeper. 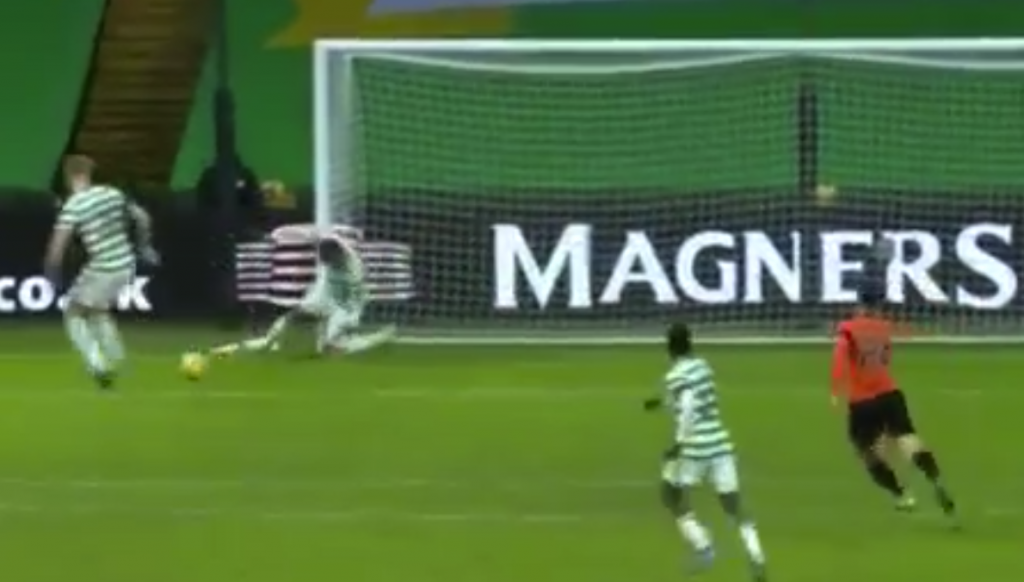 CRUNCH…Christopher Jullien clatters off the post as he makes a brave goal-line clearance.

The centre-back, however, refused to give up the goal and chased back to knock the ball off the goal-line. Unfortunately, his momentum carried him into the upright and he clattered his trailing left leg off the base of the post and it was game over for the saviour.

He was given treatment behind the goal before being stretchered off along the touchline.

In the 51st minute, Nir Bitton came on for the injured Frenchman who will clearly be a doubt for the Ibrox confrontation on Saturday.

Just before the hour mark, Christie knocked a pass to Turnbull who smashed in a low angled drive that was pushed away by Siegrist with Edouard too slow to latch onto the rebound.

In the 63 minutes, Clark was left on his own with the Hoops calling for offside. He beat Barkas too easily, but the ball flew off target.

Three minutes later, Christie set up Griffiths on the edge of the box as he dragged the ball to his left foot, but the frontman thumped an effort high, wide and anything but handsome.

Edouard was flitting around all style and no substance and he passed up another reasonable opportunity when a ferocious free-kick from Griffiths dropped to him with just the keeper to beat. He lacked conviction and the threat was repelled.

In the 74th minute, Frimpong picked out the unguarded McGregor, but his finishing effort from 12 yards was woeful and well wide. It was a fairly awful miss. 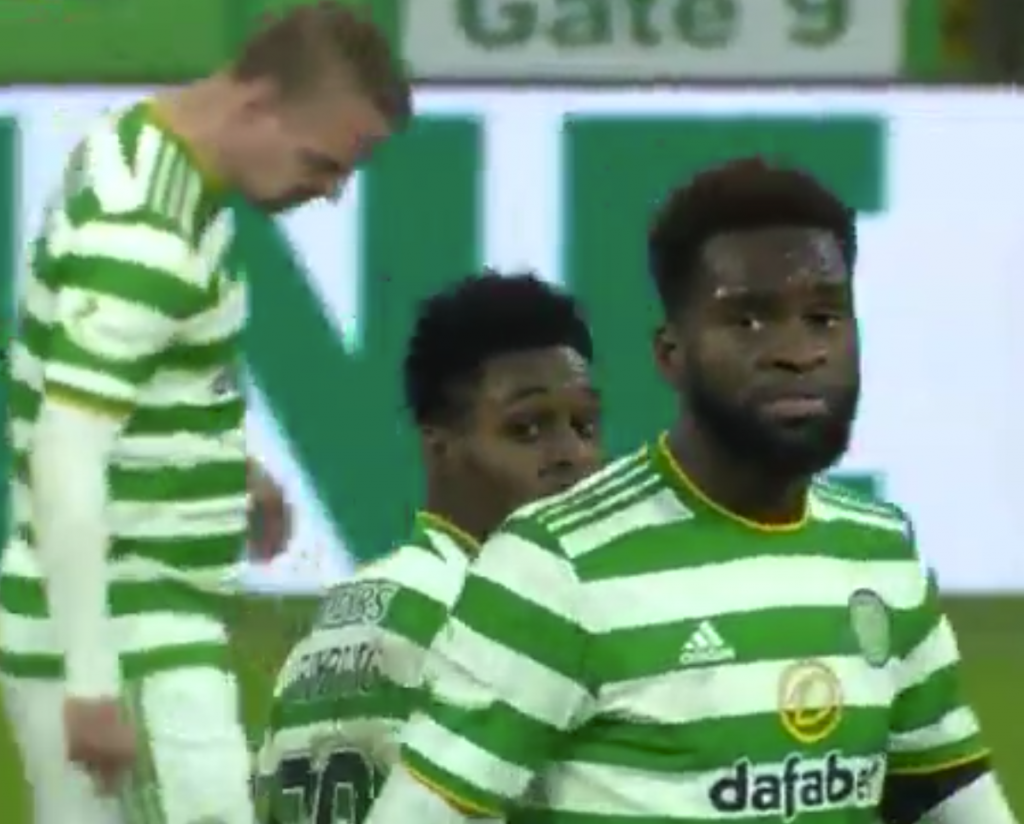 THREE CHEERS…Odsonne Edouard looks pensive after netting No.3 with Leigh Griffiths and Jeremie Frimpong in attendance.

Within moments, there was a third goal for the champions when Griffiths sent Edouard clear through the middle and on this occasion there was no mistake from the French ace as he deftly lifted the ball over the advancing Siegrist into the inviting net.

A minute later, Griffiths and Turnbull were withdrawn for Albian Ajeti and Tom Rogic to show what they could do.

Next up, it was time for skipper Brown and Mohamed Elyounoussi to come on for Soro and Edouard and there was a special cuddle for the Ivorian as he made his way to the touchline from an overjoyed Lennon.

And, so, 2020 came to a halt as far as action is concerned at Parkhead and, thankfully, it was on a high with a fourth successive Premiership triumph with 10 goals scored and none conceded in an encouraging sequence.

That is championship-winning form. Now it’s all eyes on Ibrox on Saturday.