IT was a day for heroes in front of 61,161 witnesses at Murrayfield this afternoon – and the Celtic players didn’t hesitate to stand up to be counted.

Substitutes Ryan Christie, with two astute efforts, and Scott Sinclair, with an unstoppable penalty-kick, made the difference in a remarkable second-half as the Hoops shot down their critics, made several in the Hearts camp eat their words and, once the smoke had cleared, book their place in their fifth successive domestic Cup Final since Brendan Rodgers walked in the door in May 2016.

The gulf in class between the current Premiership leaders and the seven-in-a-row champions in this tumultous Betfred League Cup semi-final was there for all to see.

Celtic, still on course for the astonishing treble treble, were unstoppable after the interval as they swept forward in waves, scored three goals, had three efforts cleared off the line and forced the keeper into a string of superlative saves.

The opening goal arrived in the 52nd minute when the elegant Christie, who had replaced the injured Olivier Ntcham at the interval, was tripped in the box by Oliver Bozanic.

Referee Willie Collum, only yards from the incident, had no hesitation in pointing to the spot.

Sinclair, who really sparked to life when he replaced Eboue Kouassi early in the encounter, held his nerve before clipping an unerring drive to Zdenek Zlamal right as the Pole took off for the opposite corner.

The Hearts keeper, who has been a hero for Craig Levein’s team since arriving in the summer, was helpless with that finish, but he had to hold his hands up for a howler at the Hoops’ second goal in the 66th minute.

A shot from Odsonne Eduard was blocked by a frantic Hearts defender and fell into the tracks of Christie. The Highlander calmly slotted the ball towards a corner and it looked as though Zlamal had it covered.

The ball, though, squirmed from his grasp as he desperately attempted to claw it away from the line. James Forrest, showing extreme reflexes to follow up the initial shot, tucked it away from two yards, but TV pictures appeared to show the ball had crossed the line before his touch.

Christie laughed aferwards: “Jamesie has told me he is claiming it as his goal. I don’t know – I’ll have to have a look at it.”

If there was a little bit of fortune about that strike, there were no arguments about Christie’s second and the killer third in the 72nd minute.

A right-wing cross from the hard-working Mikael Lustig, skipper for the day, was touched back by Edouard to the playmaker 25 yards out.

Unhesitatingly, Christie flighted a ball into the top right-hand corner of the net and the Hearts No.1 was left flapping helplessly.

It was a case of game over and Edouard had a shot cleared off the line by Jimmy Dunne and then the Irishman and Michael Smith both denied Sinclair within the space of seconds in the fading moments.

The game finished with Celtic taking their total to 13 goals in three domestic games after six against St Johnstone and four against Hibs in the previous encounters. 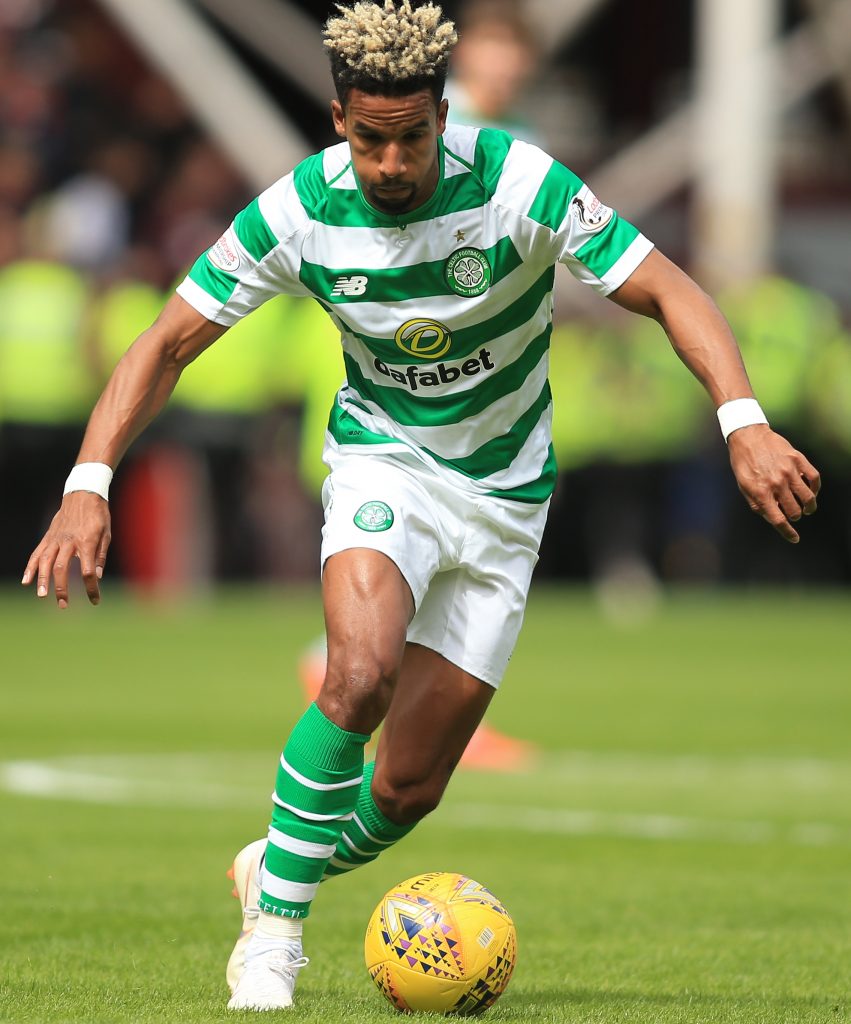 And yet the nearest the Parkhead men came to scoring during a frustrating first-half came in the 43rd minute when Tom Rogic, looking strong and positive throughout, slipped a pass in front of Sinclair.

The Englishman took off towards goal in the manner associated with his first campaign in the Hoops.

A bit of trickey bamboozled Smith as he dragged the ball on to his favoured right foot to whip in a low drive from 22 yards that looked to be arrowing in low to Zlamal’s bottom left-hand corner of the net.

However, the shotstopper somersaulted in athletic fashion to get a hand to the enterprising effort and turn it round the upright.

Sinclair had been introduced for Kouassi in the in the 27th minute as Brendan Rodgers changed the shape of his formation.

The Ivorian midfielder took a jolt when landing awkwardly and limped for a few minutes, but he looked to have picked up the pace before the Hoops boss made his switch.

There was drama in the first minute when Steven MacLean was rightly booked by ref Collum for throwing an arm into the face of Lustig.

And in the seventh minute, Steven Naismith went down with no-one near him, holding his right thigh. After pulling up again shortly afterwards, he was replaced by Danny Amankwaa.

Edouard struggled to make an impact in the opening period and was being outmuscled by the Edinburgh rearguard which was highlighted in the 17th minute when he was released in the box following a clever through pass from Rogic.

It looked a perfect pass for the Frenchman, but he was far too easily shrugged off the ball and it crept over the line for a goal-kick.

There was a passage of some slack passing from the champions driving forward and Callum McGregor emphasised that with a wild cross from the left wing that was wayward and went out of play on the opposite wing.

The Scotland international midfielder was also caught out when Olly Lee powered past him, but his 20-yard shot was straight at keeper Scott Bain who repelled the danger.

Thankfully, McGregor’s expected form returned in the second-half as Rodgers’ men stepped up a gear.

Hearts did have the ball in the net when MacLean turned in a header from a right-wing corner-kick, but the frontman was offside by at least two yards and there were no protests from the Tynecastle outfit.

The forward was fortunate the match official missed him grabbing Kouassi’s privates as they awaited a corner-kick otherwise a second yellow card would have seen him leaving proceedings before the half-hour mark.

On a day when answers were delivered with a certain amount of style, Rogic made a difference with his guile and running power, Kieran Tierney put in another tireless shift, Forrest was a constant threat, Christie displayed the talent we all knew was there and it was marvellous to see Sinclair roll back the seasons.

In the end, rampant Celtic, who replaced comeback Bhoy Kristoffer Ajer with Jack Hendry 10 minutes from time, stormed into the Betfred League Cup Final to complete a hat-trick of appearances in the competition and Hampden will be anoher location for heroes on December 2.

Who would bet against this team?