CELTIC totally annihilated Hearts and the scoreline shows an odd-goal victory in the opening round of the League Cup at Parkhead this afternoon.

A more accurate score would be 8-2 or something in that region, but in the end a late goal from Aaron McEnuff plus a succession of misses and a string of stunning saves from ex-Celt Craig Gordon really make a nonsense of what took place in the east end of Glasgow.

The Hoops were coasting two goals ahead through efforts from Odsonne Edouard and Stephen Welsh when a moment of slackness from Carl Starfelt in the 59th minute gifted the Tynecastle side a penalty-kick and Liam Boyce fired low past Joe Hart to register the visitors’ first shot on target.

Kyogo Furuhashi zipped in a third for the Hoops in the 63rd minute, but more dreadful defending allowed McEnuff to snatch a second in stoppage time. Remarkably, Hearts had scored with their only two efforts to worry Hart. 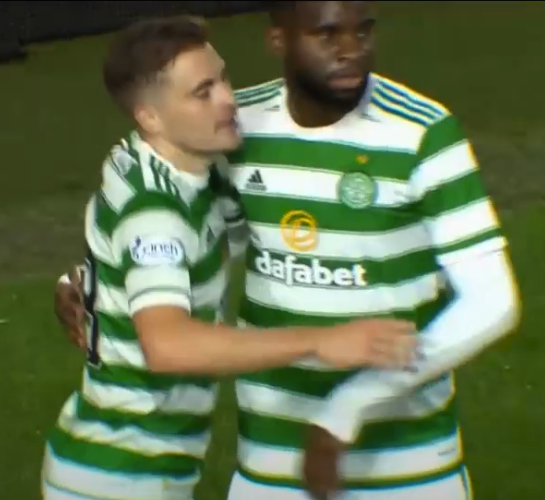 The main thing, though, is that Celtic got through to the next stage where they have a home stie against Raith Rovers who shocked Scott Brown’s Aberdeen 2-1, but there will be work for Ange Postecoglou and his players at Lennoxtown before the Europa League play-off first leg against AZ Alkmaar in Glasgow on Wednesday night.

The major mystery at the interval was that Celtic were merely two goals ahead. They had dominated the opening 45 minutes and keeper Hart was not required to get his knees dirty.

Right from the off, the Hoops swept down on their Edinburgh visitors who were in danger of being totally obliterated after 45 minutes in which Postecoglou and his players can be rightly proud. They moved the ball around with speed, their movement was breathtaking and Hearts were content to slash and hack the ball away in frantic clearances as they reeled from the onslaught.

It took until the 29th minute before the Hoops got the well-deserved breakthrough goal and it came after a move that shredded the opposition’s defence.

The lively Kyogo, who received some special treatment from frustrated defenders that eventually saw Craig Halkett booked for a sneaky trip with the ball elsewhere, got the move in motion as he sped forward and picked out James Forrest with a delightful pass off the outside of his right boot. 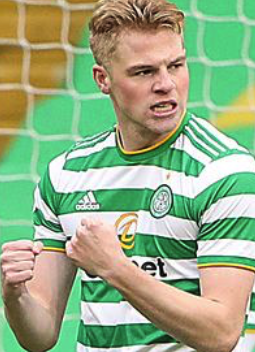 FISTS OF GLORY…Stephen Welsh after a Hoops goal.

The winger took a touch before rolling it inside for Edouard and he first-timed a right-foot effort from eight yards wide of Gordon.

Five minutes later, Stephen Welsh doubled the advantage with his second goal for the club following some more smart quick-thinking from his team-mates.

Kyogo rolled a left-wing corner-kick back to Edouard who whipped in an inch-perfect cross for the centre-back to leap above Halkett and flash an unsavable header wide of Gordon’s clutching fingers at his left.

Celtic had been relenless in the opening half. They went for the jugular and it was wonderful to watch Tom Rogic, rejuvenated under Postecoglou, dancing around the midfield looking as though he was enjoying every kick of the ball.

Rightfully, he was named Man of the Match at the end of a one-sided encounter that just was not reflected in the final score.

The Hoops almost scored in the fourth minute, but Stephen Kingsley made a desperate challenge to kick clear from Edouard just as he was about to pull the trigger after a eight-wing cross from Forrest.

Three minutes later, Gordon got down smartly to push a shot away from Kyogo. It was a procession and Edouard tugged one wide of Gordon’s right-hand post and the French frontman was booked by referee John Beaton when he adjudged he had dived in the box after a challenge from John Souttar.

The match official was not as quick to make the same decision later in the game when a Hearts player did the identical in the Hoops box, but the cards stayed in the match official’s pocket.

Just before half-time, Edouard had Gordon scrambling with a free-kick that swept just over the crossbar.

And only four minutes after the turnaround the Hearts captain blocked a drive from his former team-mate at his left-hand post. Moments later, the overworked keeper turned away a header from Edouard.

Celtic were rolling down on Gordon from all angles and Peter Haring was booked from a cynical trip on Forrest before Welsh earned a yellow for a lung at Gary Mackay-Steven. 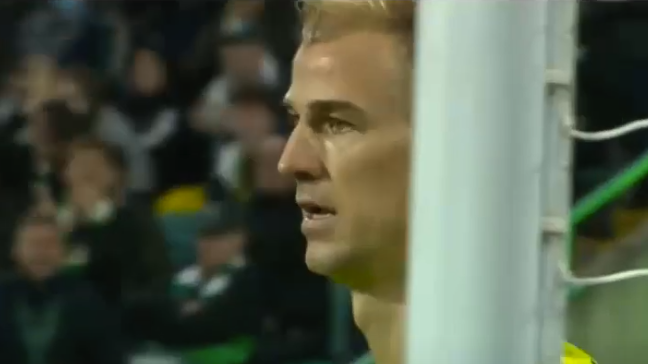 It seemed only a matter of time before the fans saw another goal, but, amazingly, it came for the visitors when Starfelt was slow to react in the box and took a swipe to clear and kicked Boyce. Beaton pointed to the spot and the striker tucked the ball away at Hart’s left as the keeper took off for his right.

Four minutes later, normal service was resumed when Turnbull passed inside for Rogic to slide a pass into the stride of Kyogo, racing in from the left, and he thumped a shot past Gordon at his near-hand post.

In the 74th minute, Postecoglou made a double substitution when he sent on James McCarthy and Adam Montgomery for Rogic and Kyogo and near the end Ismaila Soro and Albian Ajeti replaced Edouard and Turnbull.

There were more misses and saves in a one-way contest until McEneff made a mockery of the scoreline in the fading moments.

Lesson learned, Celtic. It ain’t over until the final whistle sounds.