CELTIC raced TWELVE points ahead in the chase for their magical ninth successive title as they rallied to overcome Kilmarnock at Parkhead this afternoon.

The Hoops took full advantage of Steven Gerrard’s Ibrox side’s 2-2 draw with St Johnstone at McDiarmid Park to move even closer to a record-equalling achievement.

Kristoffer Ajer, Odsonne Edouard, with his 26th strike of the campaign, and Leigh Griffiths were the men who netted the crucial goals to lead the charge towards yet another flag.

Callum McGregor deserves great praise on a day that could prove pivotal in the pursuit of the championship as he took over as the onfield leader in the absence of the injured Scott Brown and didn’t put a foot wrong as he inspired the team to a gritty comeback triumph. 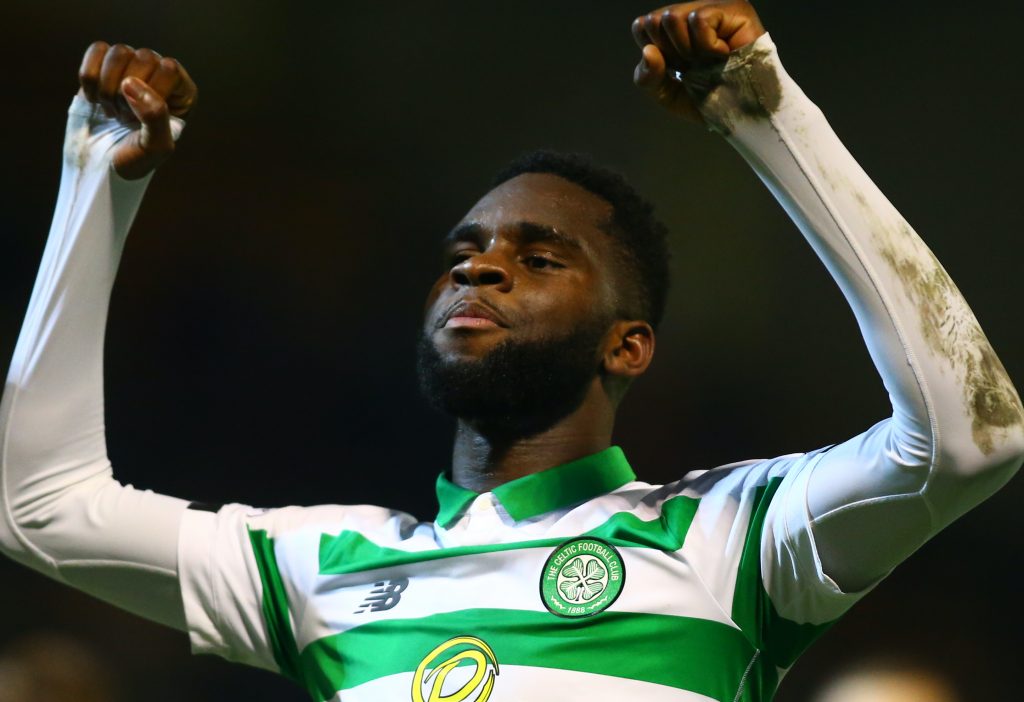 GOAL KING…Odsonne Edouard claimed his 26th strike of the season against Killie.

The game got off to a sensational start when Killie took the lead in the sixth minute via the penalty spot.

Jozo Simunovic was adjudged to have brought down Eamonn Brophy by referee Kevin Clancy who had no hesitation in pointing to the spot. Fraser Forster, hero of Copenhagen on Thursday night, was asked again to repel opponents from the 12-yard mark.

Unfortunately, the keeper had no chance on this occasion as Brophy fired the ball high into his left-hand corner. The shotstopper went the right way, but the sheer power of the effort took it into the net.

It was a setback, but the Hoops refused to panic and possibly remembered the same player put the Rugby Park outfit ahead at the same venue earlier in the season and the champions stormed back to win 3-1. 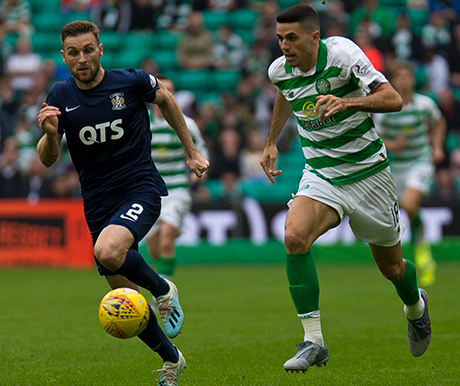 THE RACE IS ON…Tom Rogic and Stephen O’Donnell challege for possession.

Tom Rogic was first to rally to the cause in the 17th minute with a long-range drive that caused all sorts of problems for Killie No.1 Laurentiu Branescu who sprawled to parry away his effort. He managed to dive on the rebound before any Celt could take advantage.

Two minutes later, Leigh Griffiths got free to lash in a left-foot attempt, but once the keeper was in the right place to make a blocking save.

The loss of the early goal certainly stung Neil Lennon’s men and they hemmed their visitors into deep defence as they went in search of the equaliser.

At times, every Killie player was in their own half as the Hoops probed their packed rearguard as they sought an opening.

Something had to give and, thankfully, the stubborn barrier was broken in the 29th minute when Ajer, last week’s matchwinner against Aberdeen at Pittodrie, did the trick again. 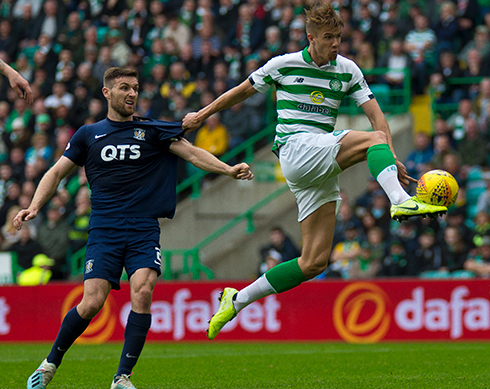 The Ayrshire outfit made a mess of trying to clear a corner-kick and the ball fell to the Norwegian at the back post. The skyscraper defender wasted no time in firing the ball home from six yards.

It wasn’t a classic strike, but no-one at Parkhead was complaining as the place erupted in joy.

Four minutes afterwards, the home fans were celebrating again when Edouard put them ahead following another period of sustained pressure that must have been leaving their rivals groggy.

This time, it was Simunovic, attempting to atone for his earlier mistake that brought Killie’s goal, who managed to send a header across goal and Edouard outmuscled Kirk Broadfoot in a scramble for the ball. The French ace got a touch although it looked as though it also clipped the former Scotland defender on its way into the net.

The Celtic talisman took the applause and no-one could complain about the turnaround in fortunes in the contest. Celtic had responded magnificently to gifting their opponents a goal of a start to go in at half-time in the lead.

And the Hoops picked up where they left off at the start of the second-half with Ryan Christie fashioning an opening for Griffiths. He didn’t quite make a proper connection as his shot bounced through a ruck of defenders and straight at the keeper.

Edouard then contrived to shoot wide on two occasions within nine minutes which was most unlike the attacker, but it was only a matter of time before the third goal arrived.

Alex Dyer’s men defended stoutly, but there cause wasn’t helped when Alan Power was shown a second yellow card following a challenge on Jeremie Frimpong. Both players stretched going for a loose ball and the match official decided the midfielder warranted another caution and flashed red to end his input to proceedings.

Coincidentally, it was Power who had clattered into Frimpong at Rugby Park last month that had seen the youngster stretchered off and sidelined for seven games. On that occasion, the Irishman escaped punishment. He wasn’t so fortunate on this occasion. 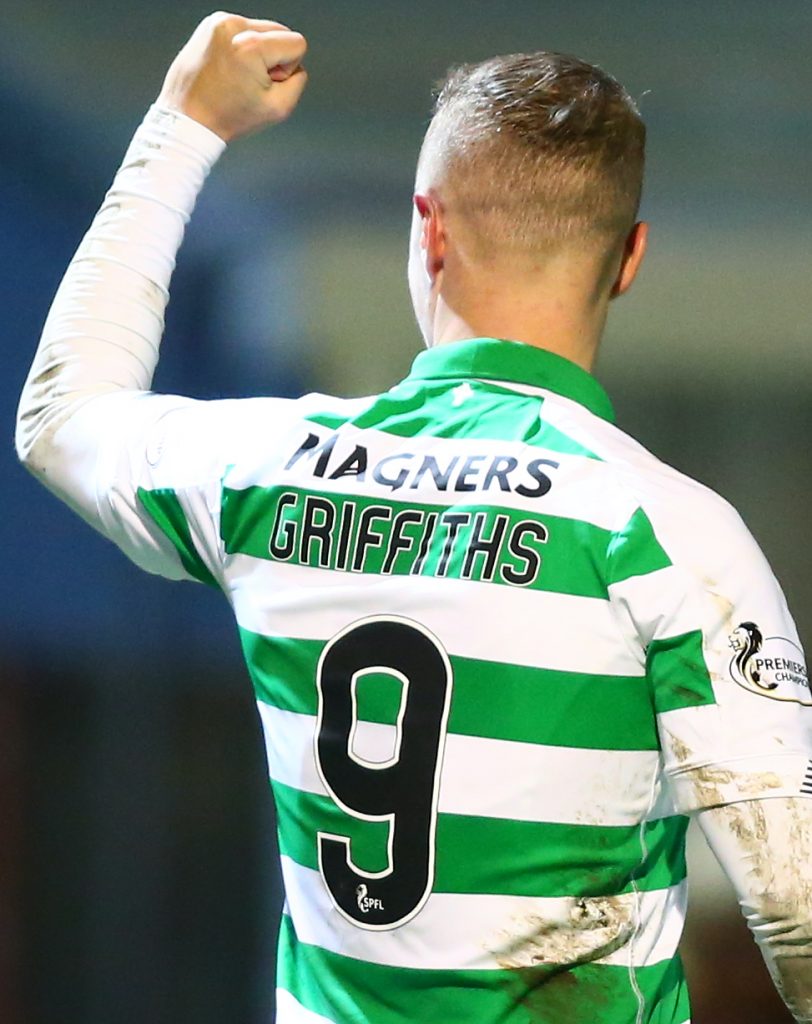 COME IN, No.9….Leigh Griffiths claimed another comeback goal against Killie.

In the 62nd minute, Griffiths got the goal his all-round play deserved as his intelligent movement inside the box left him with time and space to tuck away a pass from Christie from close range.

Eleven minutes later, Lennon made a double substitution as he took off Edouard and Rogic with Vakoun Issouf Bayo and Mohamed Elyounoussi being introduced to the action.

There was an offside effort ruled out for the 29-year-old Scotland frontman when he tucked away a neat cutback from Greg Taylor, but the left-sided wing-back was just off before he delivered his pass.

Griffiths was then denied another goal by a fantastic save from Branescu when the striker whipped in a stunning half-volley, but the on-loan Juventus keeper threw himself acrobatically across his goal to deflect the ball to safety.

The energetic hitman then went off to a standing ovation in the 81st minute with Nir Bitton coming on to take his place.

Killie have won only twice in the league at Parkhead in the past 83 years. There was never a chance they were going to make it three once the champions went up the gears with nine in a row looming into view.