The 33-year-old Hoops skipper was eclipsed by youngsters Anthony Ralston and Mikey Johnston who netted exceptional goals as Brendan Rodgers’ team returned to the pinnacle of the Premiership by a point following the goalless draw at Easter Road between Neil Lennon’s Hibs and Steven Gerrard’s Ibrox outfit.

Ralston, playing his first game of the season, opened the scoring and Johnson, a substitute for the limping Odsonne Edouard, scored his debut senior goal that piloted the team to three points.

It was an evening for the team to come back after the disappointment of a dismal display against Hibs on Sunday and underline once again their qualities in a still, cold evening in the east end of Glasgow.

Ralston, coming in for Kristoffer Ajer, set up the opening chance in the third minute with an inviting right-wing cross, but Edouard was slow to react at the near post and the ball swept clear.

In the 12th minute, Olivier Ntcham sparked a threat with a low drive from the edge of the box that was diverted just a yard or two beyond the keeper’s right-hand post.

Four minutes later, Well’s battering-ram frontman Conor Sammon clattered into Ralston to send thee youngster spinning, but referee Bobby Madden was content to award a free-kick and keep his cards in his pocket. The Irishman could easily have seen yellow. 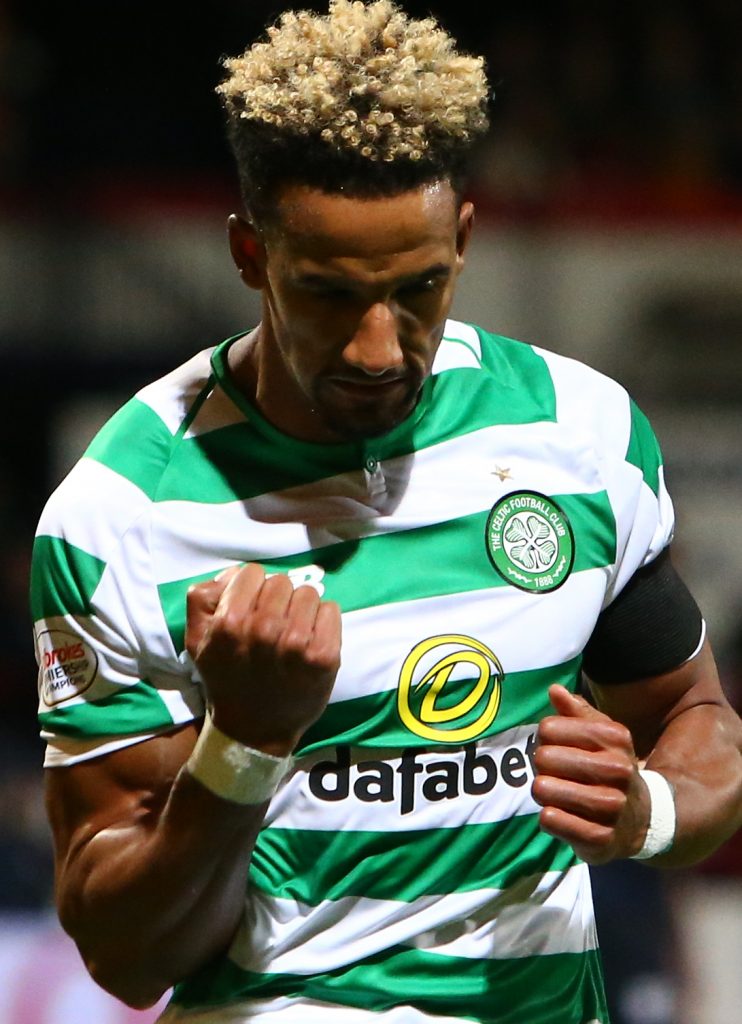 ON THE SPOT…Scott Sinclair celebrates after netting with his penalty-kick.

Scott Sinclair and Edouard combined in the 24th minute, but the Englishman, after showing some delightful trickery with quick feet, lacked composure with his finishing attempt from six yards and outrushing Well keeper Mark Gillespie blocked the effort.

Celtic, with the bulk of possession, battled for the breakthrough goal and it duly arrived in the 28th minute and it was a case of many happy returns for Ralston.

Edouard deserved great credit for his part in the barrier-breaking strike with his link-up play as he held up the ball before releasing an exquisite pass into the tracks of the rampaging right-back who flashed a low drive wide of the helpless shotstopper.

Four minutes later, Parkhead erupted again when Charles Dunne launched a reckless tackle on James Forrest that sent the winger crashing to the turf. It was a challenge more likely to be associated with the sport of rugby and the match official had no option but to point to the penalty spot.

Sinclair, who missed from the spot in the Betfred League Cup Final against Aberdeen at the start of the month, elected to take the award and swept an unstoppable effort low into the bottom right-hand corner of the net.

In the 38th minute, Edouard limped off in some discomfort after going down with no-one near him. Bright prospect Johnston was sent on to take the place of the unfortunate Frenchman.

A minute from the interval, Ntcham zipped in a ferocious right-foot drive from 29 yards that crashed off the chest of Gillespie and bounced clear.

Remarkably, as the seconds ticked down towards half-time, Johnston claimed his first senior goal to make it 3-0 and the Hoops kid celebrated the memorable event with a fair bit of style.

He accepted a pass from Forrest 20 yards out, shimmied away from an opposing defender and clattered an unsaveable right-foot howitzer over the clawing fingers of the despairing Gillespie into the top left-hand corner.

Ntcham came close to adding a fourth in the 64th minute when he got clear on the edge of the box, but Gillespie sprawled to his right to stop the effort with his right hand.

Two minutes later, Lewis Morgan came on for Sinclair as Brendan Rodgers planned ahead for the forthcoming games against Dundee, Aberdeen and Rangers before the turn of the year.

Following a series of fairly hefty challenges from the visitors, Carl McHugh was eventually booked after upending the elusive Morgan.

Bizarrely, Filip Benkovic appeared to be singled out for some harsh treatment from the Fir Parkers and was on the receiving end of some dubious challenges, but ref Madden resolutely refused to take stern action against the culprits.

Celtic were in total command as they played possession football as the minutes ticked down to the final whistle.

The game was effectively over after the three-goal salvo in the opening 45 minutes and the triumph sets them up nicely for the visit of Dundee on Saturday.