REO HATATE was the star of the show as Celtic went to the top of the Premiership with a massive performance and thoroughly-deserved result at Parkhead this evening.

The Japanese star scored two goals and set up a third for Liel Abada as the Hoops flattened their rivals with a breathtaking opening 45 minutes.

Hatate netted a memorable double and superbly set up the third for the raiding Israeli winger just before half-time.

Understandably, the pace slackened in the second-half and Ange Postecoglou introduced a raft of substitutes, but by then the win was a foregone conclusion and the Greek-Australian’s team are now at the pinnacle one point ahead with 14 games to be played. 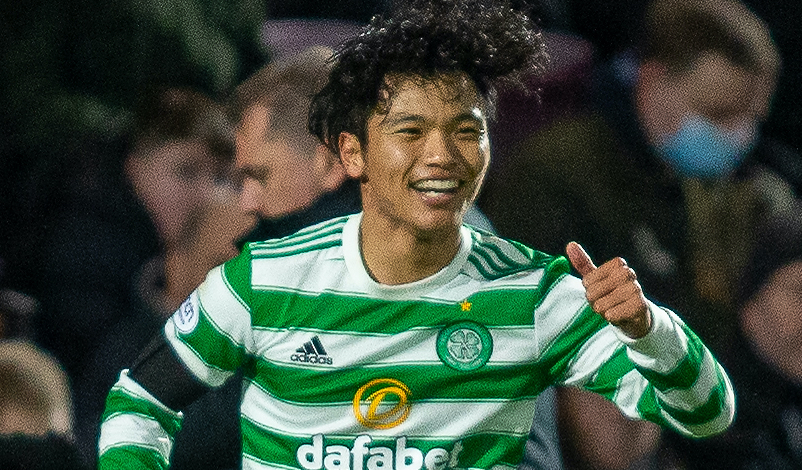 The roof threatened to come off Celtic Park during a pulsating, rocking first period that saw the Hoops race to a three-goal interval advantage.

Postecoglou’s side began at a ferocious high tempo and the Ibrox visitors just could not live with their opponents as Abada and Flipe Jota shredded their defence on the flanks, Callum McGregor strolled through the game wearing his face protection mask which certainly did not interfere with his vision, Hatate was everywhere once again and Matt O’Riley made another significant contribution.

It’s hard to believe the 21-year-old midfielder was performing in the English third tier with MK Dons last month.

There wasn’t a failure on a crucial evening in the east end of Glasgow that saw the home team storm towards the overworked Allan McGregor in the rivals’ goal.

Postecoglou beamed on the touchline as the Hoops took the lead in only five minutes.

O’Riley sent in a dangerous corner-kick from the right which was frantically cleared to the lurking Hatate just outside the box.

The Japanese ace summed up the situation in an instant. He took the ball down with his left and then struck a delicious right-foot drive low past the stretching McGregor at his left.

The desperate opponents appealed to referee Bobby Madden to rule out the goal after Calvin Bassey and Joe Aribo had clashed heads as they went for the swirling ball. It’s worth pointing out there were only FOUR SECONDS between their coming-together and the goal.

The match official actually had a word with his standside assistant and for a moment Parkhead held its breath. And then he quite rightly pointed to the centre spot.

Celtic could have taken it as an omen that only four times in the past 93 Glasgow derby confrontations have the team scoring first gone on to lose the game. There was no way Postecoglou’s men would be making it number five. 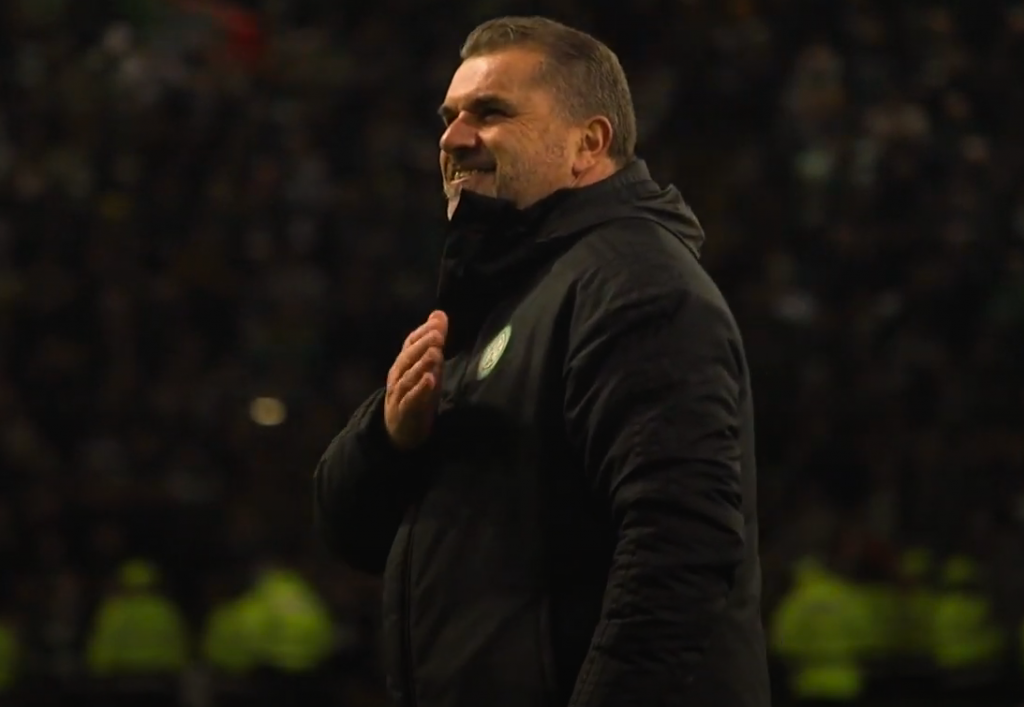 PARADISE…Ange Postecoglou shares the joy with the celebrating Celtic support.

Remarkably, the home side were denied three times by McGregor when it looked as though they must increase their lead in the overwhelming first period.

Jota snapped onto a loose pass from James Tavernier to race in at an angle before smashing a shot at goal.

The 40-year-old netminder pushed the effort into the air and Giorgos Giakoumakis leapt high above Bassey to power in a header, but McGregor scrambled back to his feet to fist the ball away.

The Greek frontman had another chance in the 19th minute after being set up by the industrious Abada, but once again the shotstopper did his job.

In the 41st minute Joe Hart to be off his line smartly to take the ball off the toes of Scott Arfield after a pass from Joe Aribo had split the home centre-backs.

Sixty seconds later, Celtic doubled their advantage after a sweet move down the right involving Josip Juranovic, who rarely wasted a pass, O’Riley and Abada.

The ball was played back to Hatate 22 yards out and once again the midfield maestro was deadly with his right-foot shot which curled low past the despairing McGregor at his left-hand post.

Two minutes afterwards, it was bedlam in the stadium as Hatate worked some magic to bamboozle Tavernier on the left before crossing with devastating accuracy into the box.

Abada’s timing was mesmerising as he raced in front of the hesitant Borna Barisic to bury a close-range drive behind the shell-shocked Ibrox No.1.

Celtic took their foot off the gas in the second-half as they made certain they did not invite their opponents into the contest.

Hart was rarely troubled as the nearest the opponents came to a goal was a thunderous 30-yard drive from Ryan Jack that thudded against the crossbar and bounced to safety.

NUMBER THREE…Liel Abada leaves the visiting defenders in his wake as he knocks in the third.

Postecoglou introduced Daizen Maeda and James Forrest for the tiring Giakoumakis and the limping Abada in the 62nd minute while James McCarthy joined the action 10 minute later for the truly wonderful Hatate.

In the 86th minute, a clever free-kick from O’Riley was tipped over the bar by McGregor and shortly afterwards the player was replaced by Ismaila Soro while Jota also came off with Ben Doak coming on for the last eight minutes including stoppage-time.

The full-time whistle was greeted by a roar of elation and relief with the team taking their rightful place at the top of the Premiership.