Celtic Quick News on News Now
You are at:Home»Match Report»CELTIC 3 RENNES 1: NINE IN A ROW PLUS A EUROPA JACKPOT
By CQN Magazine on 28th November 2019 Match Report

RELENTLESS Celtic notched up their ninth successive victory as they overcame Rennes in the Europa League group E game at Parkhead this evening.

The win ensured they topped the section as well as having already made certain of a place in the knock-out stages of the competition next year following their historic win over Lazio in Rome earlier in the month.

The Italians beat Cluj 1-0 to make certain the Hoops will be seeded in the last 32 plus they will pick up a Europa jackpot of around £1million for finishing in pole position.

Neil Lennon took the opportunity to rest striker Odsonne Edouard and fielded Lewis Morgan in the unaccustomed role against the French visitors. The Scotland international winger repaid the boss by snapping up the breakthrough goal in the 21st minute.

The game had little pattern until a sweeping move down the left involving Greg Taylor and James Forrest saw the ball switched inside and Morgan arrived bang on cue to thump a first-time left-foot drive low past the helpless Edouard Mendy. 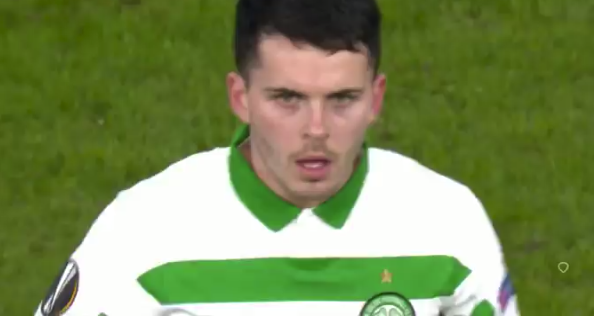 And Ryan Christie doubled the advantage in first-half stoppage-time when he was set up by a clever header from skipper Scott Brown that allowed him the opportunity to carry the ball on towards the opponents’ goal before unleashing a left-foot 25-yarder that took the keeper totally by surprise.

Mendy looked slow to react and the ball zipped off the turf in front of him and eluded him at his left-hand post.

The first shot on target actually came from the French in the sixth minute when Del Castillo cut in from the right to wallop in a wicked left-foot effort, but Fraser Forster anticipated the danger and got down well to his right to beat the ball to safety. 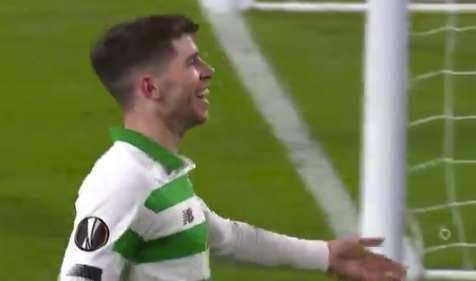 GOOD CHRISTIE…Ryan Christie is all smiles after netting his goal in first-half stoppage time.

In the 18th minute, Olivier Ntcham had the Hoops’ first shot of note when he thundered in a remarkable 35-yarder that had Mendy throwing himself low to his right to push the effort wide of the post.

Ten minutes later there was a Celtic French connection when Christopher Jullien headed the ball down into Ntcham’s tracks to hammer in a ferocious attempt. Mendy made a surperb save as he got down to parry the ball and dive on the rebound before anyone could capitalise.

Brown picked up a booking for a challenge on an opponent that will see him suspended for the final group encounter against Cluj in Romania in a fortnight’s time.

Fraser Forster pulled off a breathtaking double save in the 57th minute when he blocked a close-range drive and then reacted with lightning reflexes to get back to his feet to deflect a second drive onto the post.

In the 67th minute, Mikey Johnston came on for Forrest to make his first appearance since being injured in the 2-0 win at Ibrox at the start of September.

Seven minutes later, Magic Johnston was celebrating as he marked his return with a sensational goal. He picked up the ball on the edge of the box, played a neat one-two with Ntcham, dodged a defender and sent a rasping low angled drive wide of the diving Mendy. 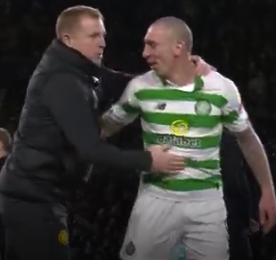 THAT’S MY BHOY…Neil Lennon congratulates Scott Brown as he comes off in the 76th minute.

Understandably, the tempo of the game dropped, but Johnston still drew a good save from the keeper with another low attempt while Griffiths powered in one from 18 yards that was blocked by Mendy.

In the fading moment, Hunou headed in a late consolation goal for the visitors from a left-wing delivery.

However, it didn’t take the gloss off another well-deserved European triumph for unstoppable Celtic.