CELTIC edged three points clear as they maintained their place at the Premiership pinnacle with a well-deserved triumph as they exacted pummelling revenge on Livi with a thoroughly convincing performance at Parkhead this afternoon.

Gary Holt’s men paid a heavy price for their upstart win when the Hoops just didn’t turn up and a sloppy display brought their only domestic loss of the campaign.

However, the Hoops made up for it on this occasion with goals from Odsonne Edouard and Scott Brown and a double from James Forrest while there was further good news with the long-awaited return of Leigh Griffiths as a second-half substitute. 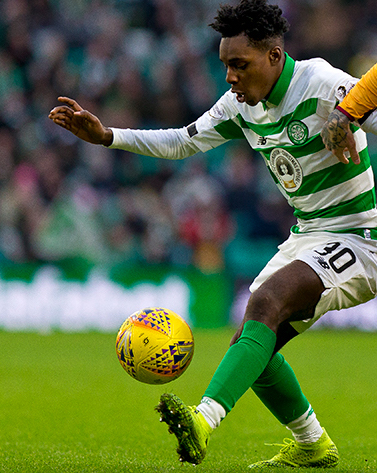 DUTCH TREAT…Jeremie Frimpong was a stand-out at right-back.

The closest to a goal in the early moments came when the adventurous Jeremie Frimpong burst through on the right before turning an opponent, but his right-foot attempt at goal was gratefully held by the well-positioned Livi keeper.

Once again, Livi were fired up for a confrontation with the champions as they chased and harried right from the kick-off – just as they did in their remarkable 2-0 win in West Lothian last month.

Celtic, however, began to take control as the game wore on, although they still found a breakthrough strike hard to come by. In the 15th minute, Forrest tried his luck with a right-foot effort outside the box, but the attempt was blocked and hastily cleared.

Three minutes later, Callum McGregor was next to thump in a drive, but the visiting shotstopper was in line to save again.

However, the Livi No.1 had to admit defeat when that man Edouard claimed his 14th of the campaign with a typically clinical finish in the 19th minute.

Tom Rogic, returning to the starting line-up, was involved with a neat ball forward that eluded centre-back Ricki Lamie who mistimed his attempt at an intervention. 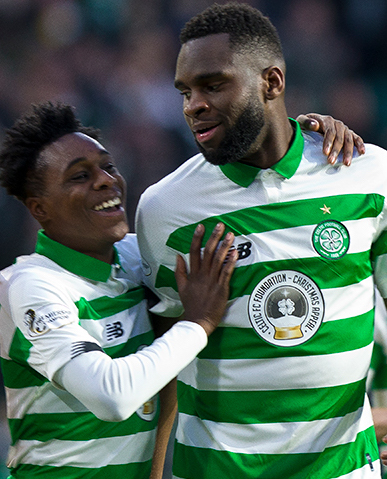 WHAT A DOUBLE…Jeremie Frimpong and Odsonne Edouard were bang on form.

The Frenchman gathered the ball in his stride as he zeroed in on the unprotected Matija Sarkic. There was no way he was going to pass up the opportunity and he made no mistake with a nonchalant clipped finish with his left foot.

Eight minutes later, Rogic whipped in a left-foot shot and once again the goalie was in the right place at the right time to repel the raid.

Just before the half-hour mark Fraser Forster was reminded he had a job to do when Steven Lawless hit the target with a left-foot attempt, but the Hoops keeper wasn’t put under any undue pressure and saved comfortably.

Normal service was resumed in the 32nd minute when Forrest had a shot charged down by a defender and that was followed by McGregor walloping one high and wide from outside the box.

Edouard had two chances in the space of five minutes to double the Hoops’ advantage, but opportunities went abegging. In the 34th minute, the elegant attacker had a shot saved low at the post and then he raced onto a sublime pass from Forrest, but, on this occasion, he elected to go for power instead of precision and blasted the ball against Sarkic.

Rogic was next up to squander a chance when he missed from a decent position. Frimpong made a dynamic run on the right flank before picking out the Aussie with a superb pass, but, unfortunately, the gifted playmaker leaned back at the moment of impact and sent the ball sailing harmlessly over the bar from eight yards.

It remained at 1-0 for the title kings at the interval, but, really, it should have been so much more given the home side’s territorial domination and ball possession. 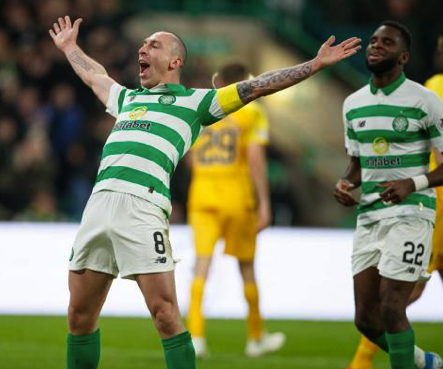 SKIPPER SUPREME…Scott Brown celebrates his goal against Livi with Odsonne Edouard about to join in.

Greg Taylor was introduced for Jonny Hayes in the 50th minute with the Republic of Ireland appearing to struggle with a knock.

The Scotland international left-back almost made a sensational appearance when he got through after some clever play and cracked a shot past Sarkic. Alas, a dream goal in only his second game since his August arrival from Kilmarnock was denied when the ball slammed off the right-hand post and rebounded to safety.

In the 57th minute, man-of-the-moment Brown hammered in the deserved second goal to bring to an end the charmed life of the Livi goal. The hard work was done by Ryan Christie as he set it up for the skipper on the edge of the box and the midfielder let fly. It may have taken a touch off an opponent, but it was a worthy effort from the onfield leader and no-one could complain about the home side deserving to double their advantage.

Very quickly, it leapt to three when Forrest got on the scoresheet in the 64th minute after a drive from Edouard had been deflected and he latched onto the ball to rattle it into the inviting net.

There was a huge roar in the 68th minute when Edouard came off for a well-earned rest and fans’ favourite Leigh Griffiths was introduced for his first appearance since the 3-1 win over Hearts in August.

A STROLL IN THE PARK…Christopher Jullien was rarely toubled on this occasion.

Frimpong was creating havoc with his very own teenage rampage on the right with his spectacular raiding and Taylor was doing likewise of the left and he came so close to setting up a fourth for Christie with a low pass, but the Highlander squeezed it wide of the post.

The 18-year-old Dutch star set up a brilliant chance for the returning Griffiths and it looked as though he must net his fourth goal of the season, but he took his eye off the ball and the chance was lost.

Olivier Ntcham came on for Rogic in the 76th minute as Lennon kept things ticking over.

The game was in its fading moments when Forrest tucked in the fourth and final goal to take his tally to the season for 13 – just one adrift of Edouard.