CELTIC coasted to three points with an accomplished performance against a brave Paisley side tonight – and the win was welcomed as Steven Gerrard’s side went down 2-1 to Kilmarnock at Rugby Park.

The Hoops are now a point ahead of Steve Clarke’s outfit with a game in hand after a dramatic evening of Premiership action.

Oliver Burke collected his first two Hoops goals, Scott Sinclair kept his nerve to fire in a penalty-kick and immediate fans’ favourite Timothy Weah added a fourth near the end as the champions claimed their 10th successive home league triumph.

It was comprehensive as Brendan Rodgers’ men started on the offensive and kept their foot on the gas throughout the one-sided confrontation.

And it was heaven in 11 when new Bhoy Burke got his first goal for the Hoops in his second appearance. And it’s doubtful if the Scotland international attacker will get an easier one.

Justice was done after James Forrest was hauled back by Ethan Erhahon who escaped even a word of caution from referee Euan Anderson.

Ryan Christie swung in the free-kick from the right in the 11th minute and Burke found himself unmarked smack in front of goal. The on-loan West Brom forward launched himself at the ball and sent a header ricocheting off the keeper into the net from six yards.

HEADS I WIN…Oliver Burke dives to send a header into the St Mirren net for the opener.

Six minutes later, Czech Republican keeper Vaclav Hladky was picking the ball out of the net – and once again the Paisley strugglers had no room for complaint.

Sinclair, in a scintillating form, was flattened by Jack Baird as he danced into the danger area and the match official had no hesitation in pointing to the spot.

The Englishman, who missed a penalty-kick in the 3-0 win over Airdrie in the Scottish Cup at the weekend, showed confidence to take the responsibility again.

His admirable conviction in his own ability was rewarded when he stroked the ball in at the right-hand post.

The Saints were forced to replace the limping Lee Hodson with Jim Kellerman as they attempted to repel incessant Celtic attacks.

In the 25th minute Callum McGregor squandered a superb chance to claim the third goal after some slick interplay from Forrest and Burke set up the opportunity. However, with just the keeper to beat, the midfielder waywardly blazed the ball over the crossbar.

On the half-hour mark, Emilio Izaguirre stepped inside on the edge of the box to curl in a right-foot effort that sailed wide of Hladky’s left-hand upright.

Four minutes from the interval, Christie flighted over a cute free-kick from the left which was met perfectly by Mikael Lustig, but his header lacked the precision required to beat the opposing No.1.

Three minutes into stoppage time, Scott Bain, starting in place of Craig Gordon, has his first shot on target to deal with and he comfortably held an 18-yarder from Stephen McGinn.

The Hoops surged forward relentlessly throughout the opening 45 minutes and the only surprise was that only two goals were claimed in the period of total domination. 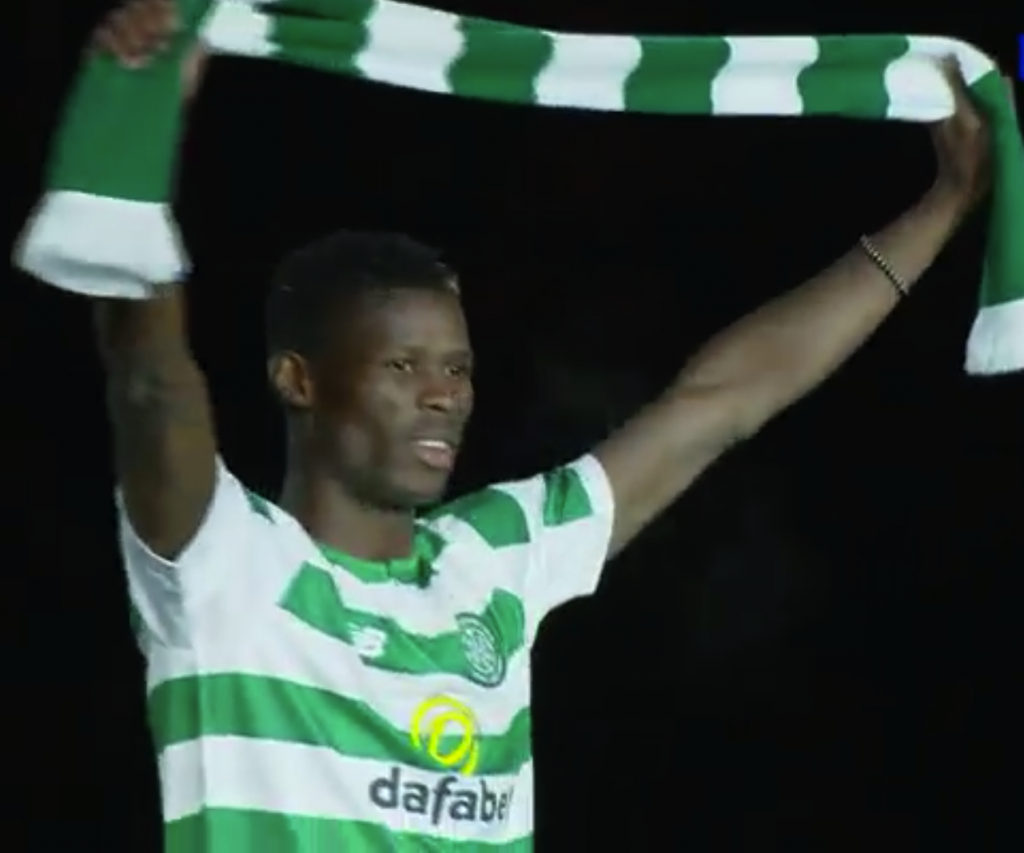 WELCOME TO PARADISE…new signing Vakoun Issouf Bayo is introduced to the Celtic fans at half-time.

There was a remarkable moment during the interval when £2million new signing Vakoun Issouf Bayo was introduced to the support under the lights at Parkhead. The Ivorian international striker proudly held aloft the Celtic scarf bathed in a green glow for an amazing image.

In the 55th minute, the Hoops crashed in the third goal and once again it was Burke on target after a bit of penalty box ping pong.

Christie sent Forrest scampering through with an excellent pass and the winger zipped a shot at goal that was parried by the keeper. The ball bounced to McGregor, but once again Hladky spread himself to block his effort.

However, the gallant Czech had to admit defeat when Burke followed up and he showed composure as he calmly sidefooted the rebound into the net.

Nine minutes later, the pacy frontman made way for Timothy Weah as Brendan Rodgers changed things with his team in cruise control. 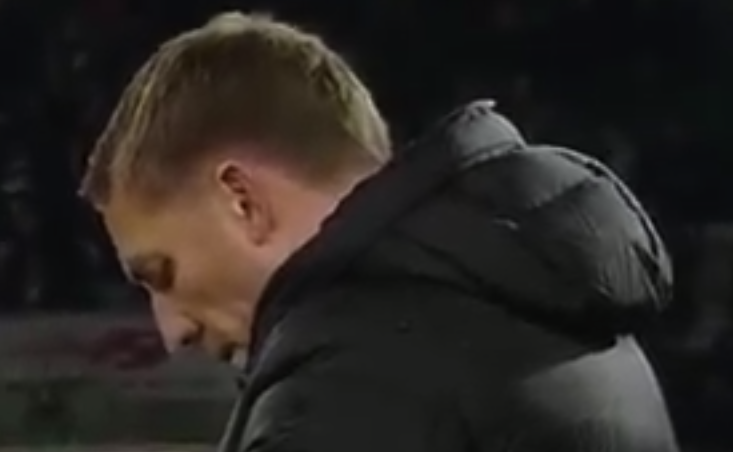 THE THINKER…Brendan Rodgers keeps his head down as he works on tactics.

Just over two minutes later, the on-loan Paris Saint-German talent flicked a McGregor lobbed pass beyond the goalie, but the ball struck the post. It didn’t matter, though, as the ref ruled the American was offside.

Shortly afterwards, Weah latched onto a pass from Forrest, but on this occasion the hard-worked Paisley No.1 managed to touch the ball wide of the far post.

Ewan Henderson then replaced Christie who had put in a superb shift in keeping the ball moving throughout the evening.

And the youngster was instrumental in setting up the talented Weah to thump in his second goal for the Hoops four minutes from time.

In the end, it was a professional job well done and the seven-in-a-row title kings can look down from the pinnacle on the rest of the Premiership yet again.