Celtic Quick News on News Now
You are at:Home»Match Report»CELTIC 5 DUNDEE 0
By CQN Magazine on 1st May 2015 Match Report
IT was cruise control all the way as Celtic edged to within one point of their fourth successive title with an overwhelming victory at Parkhead.
The runaway triumph means that Aberdeen must beat Dundee United at Tannadice tomorrow afternoon to keep the race going for at least another 90 minutes. 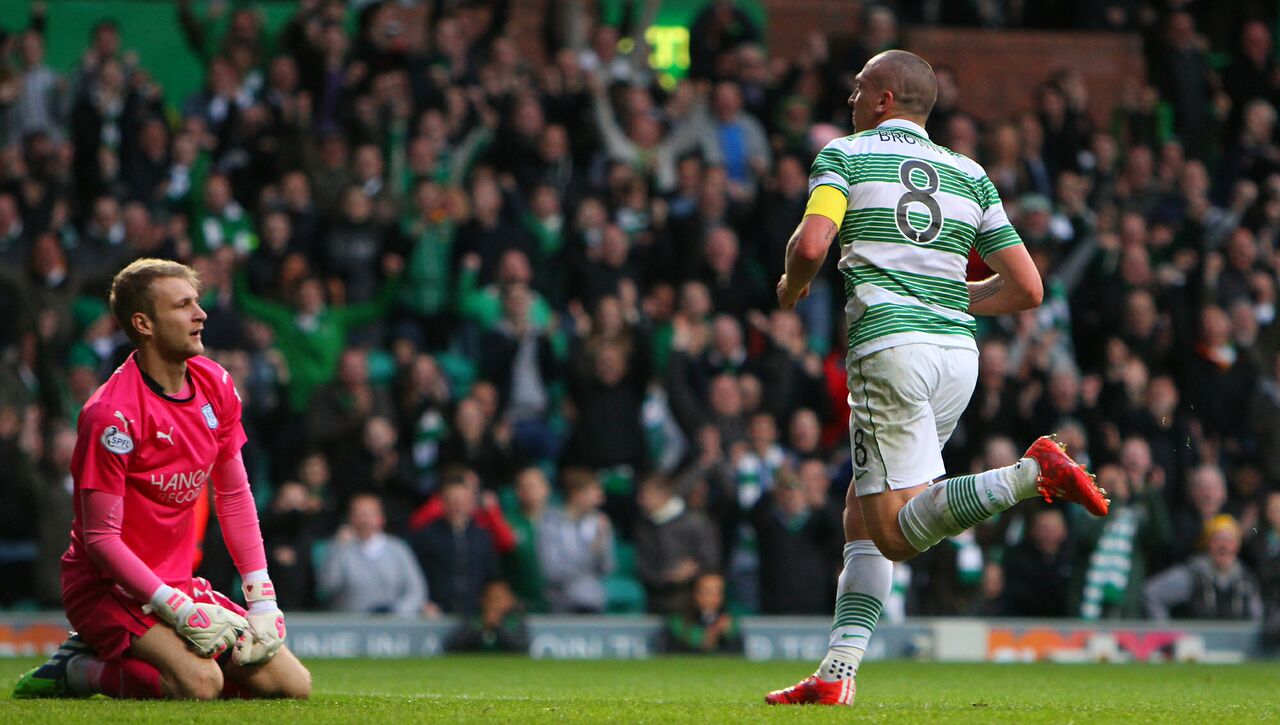 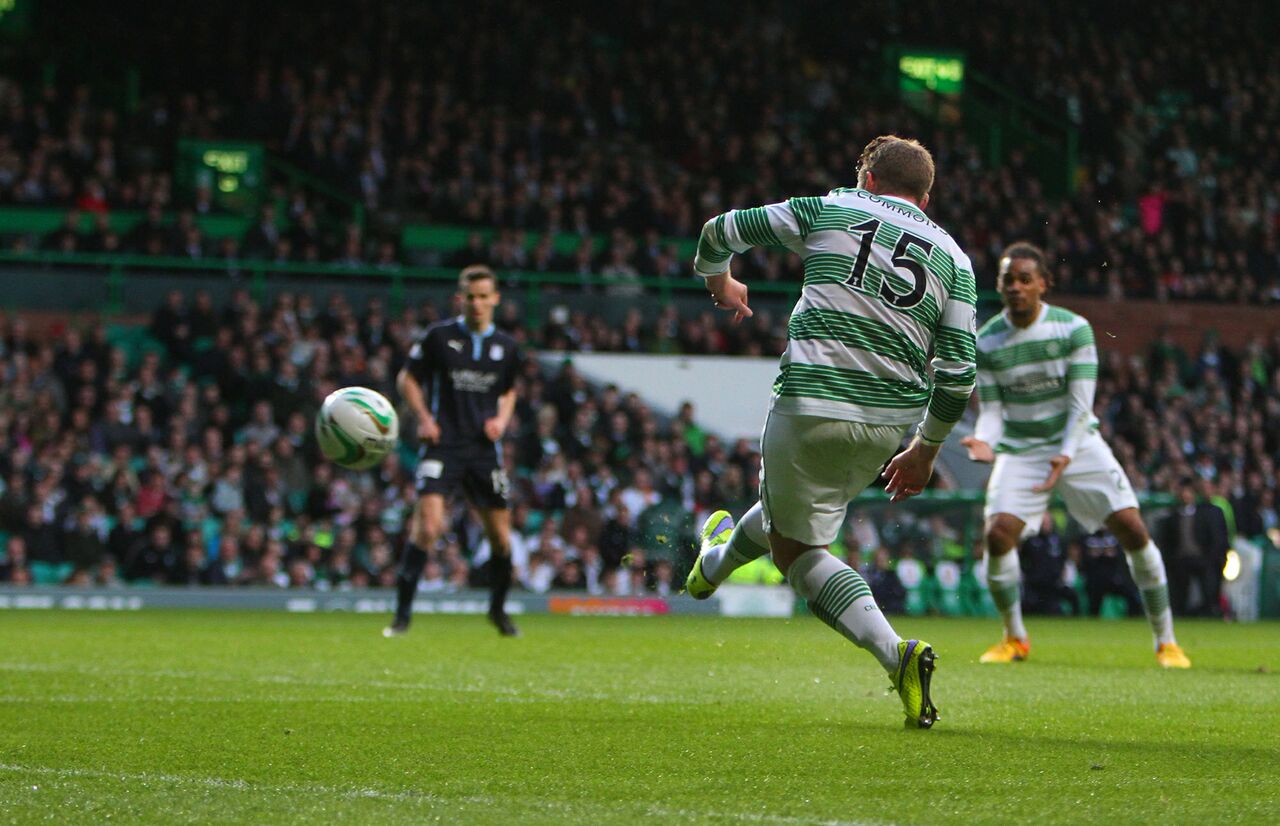 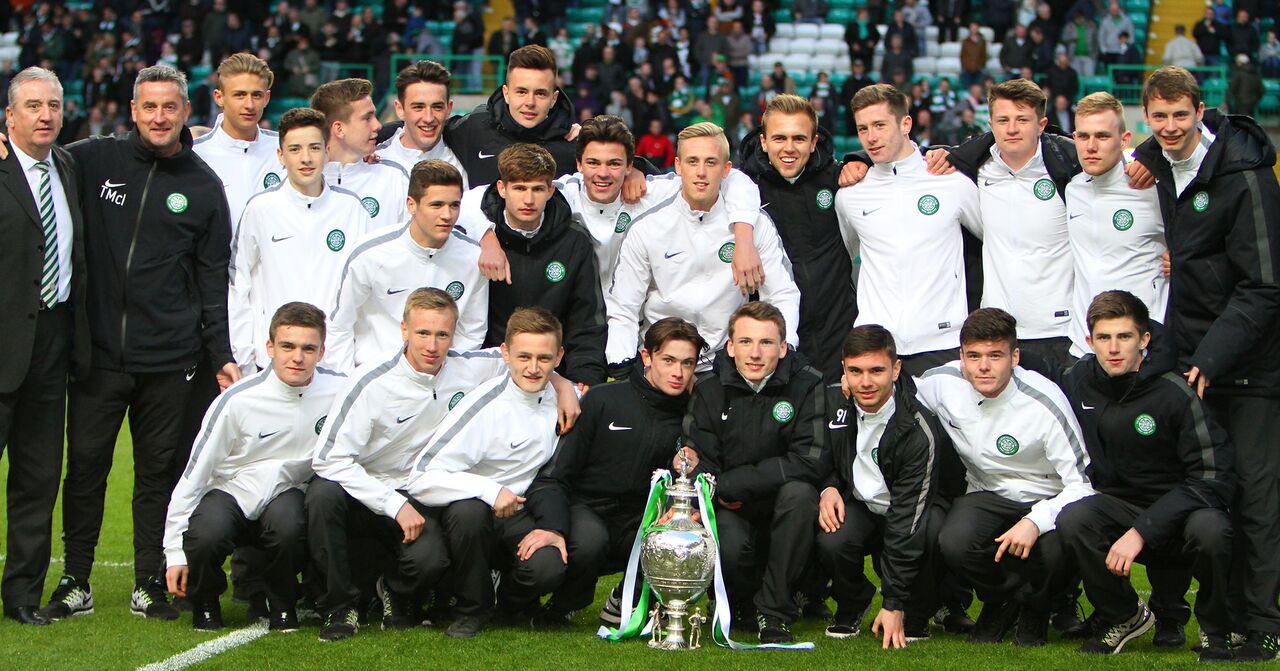 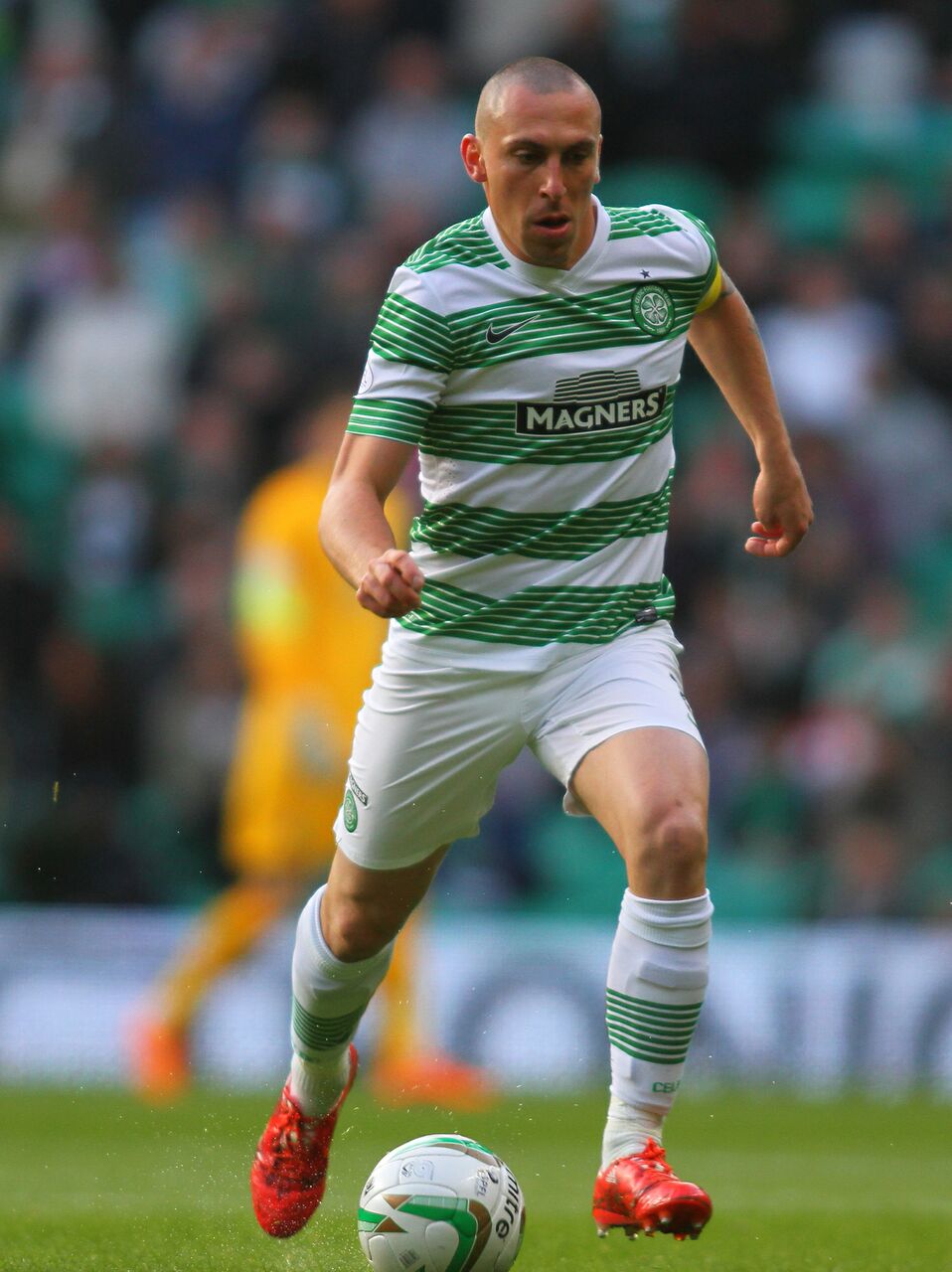 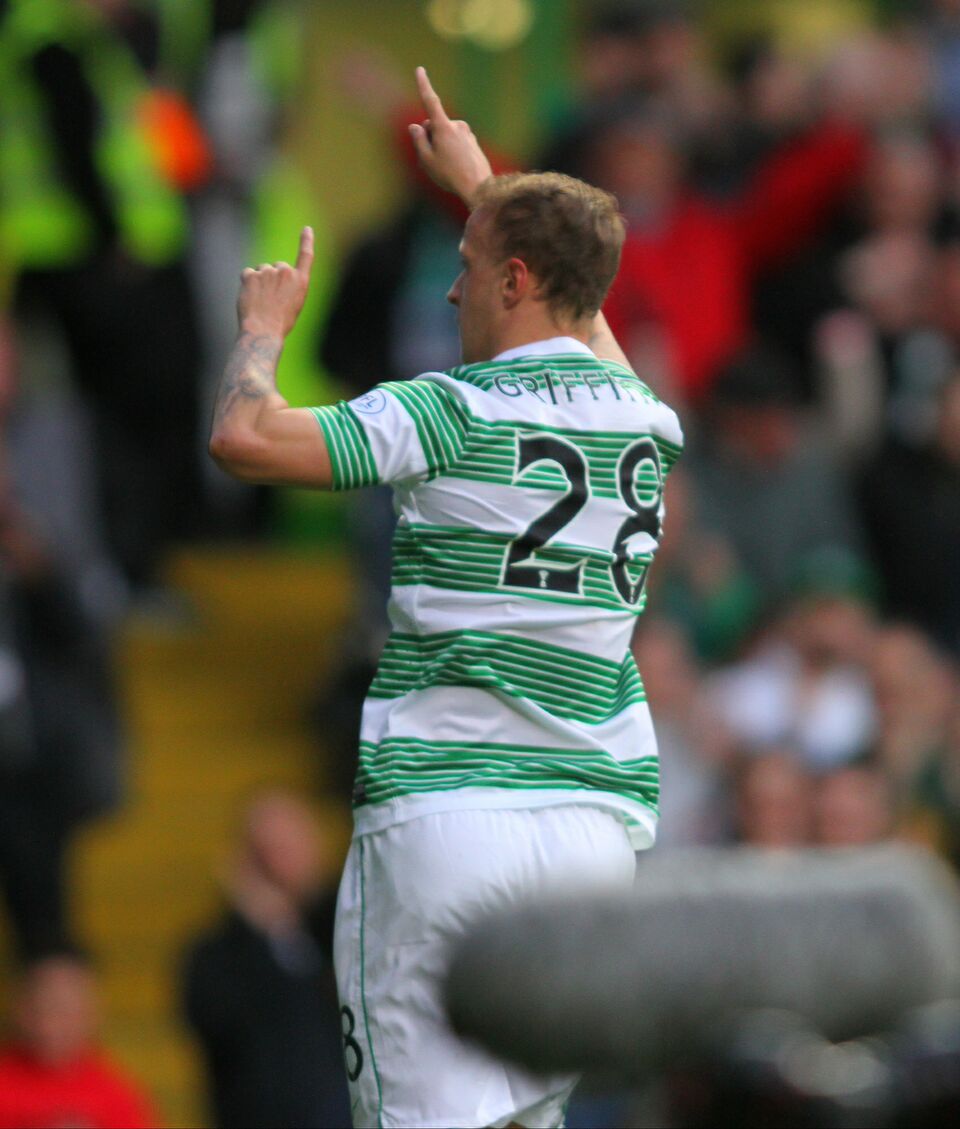 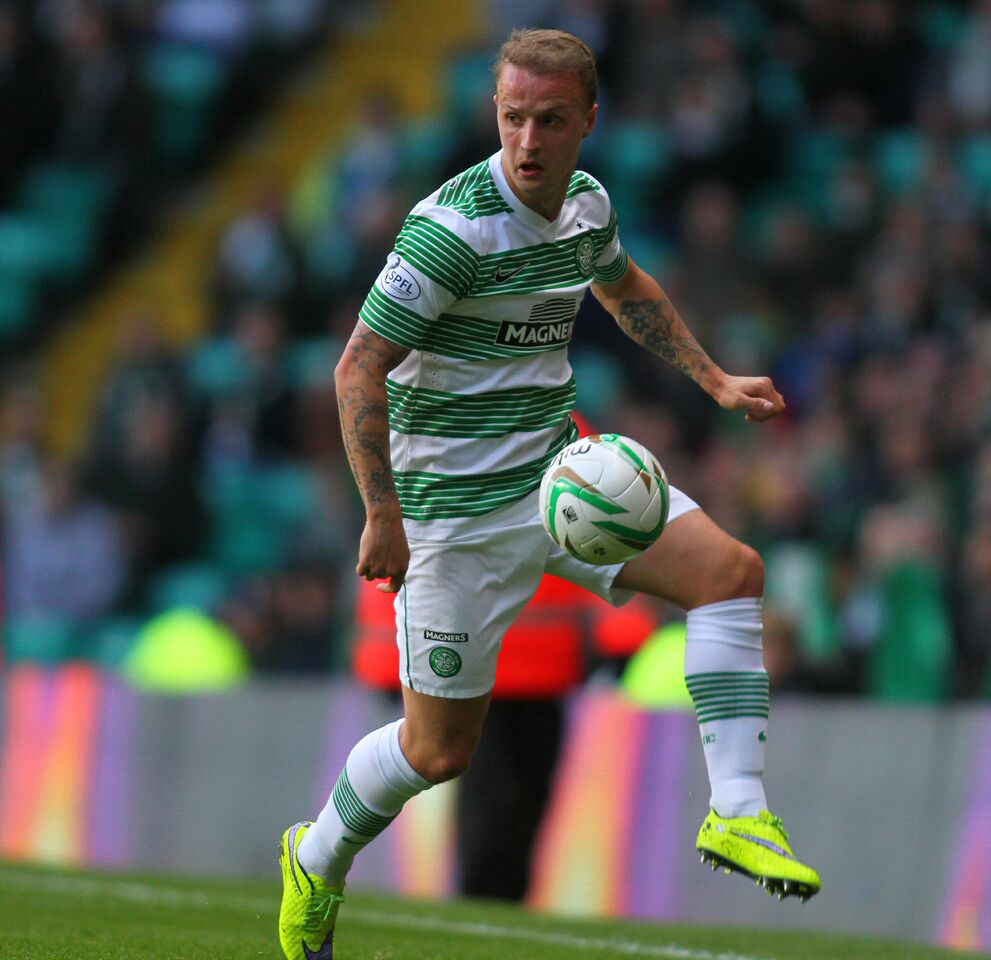 This was a command performance from Ronny Deila’s side as they dominated right from the start and keeper Craig Gordon had to wait fully 20 minutes for his first touch of the ball.
The best opportunity in the opening stages fell to Stefan Johansen in the 12th minute, but he was off target as he tried to elaborately curl the ball into the top corner of Scott Bain’s net. His elevation was just out.
There was a strong penalty claim in the 26th minute when the Norwegian midfielder was clearly fouled by a panicking Kevin Thomson after the Dens player had lost control of the ball in the box. Referee Bobby Madden had a clear and uninterrupted view of the incident, but elected to award Celtic a corner-kick.
Two goals in seven minutes, however, put a true complexion on the scoreline. Leigh Griffiths netted his 13th of a prolific season in devastating fashion with a bullet-like header in the 30th minute. 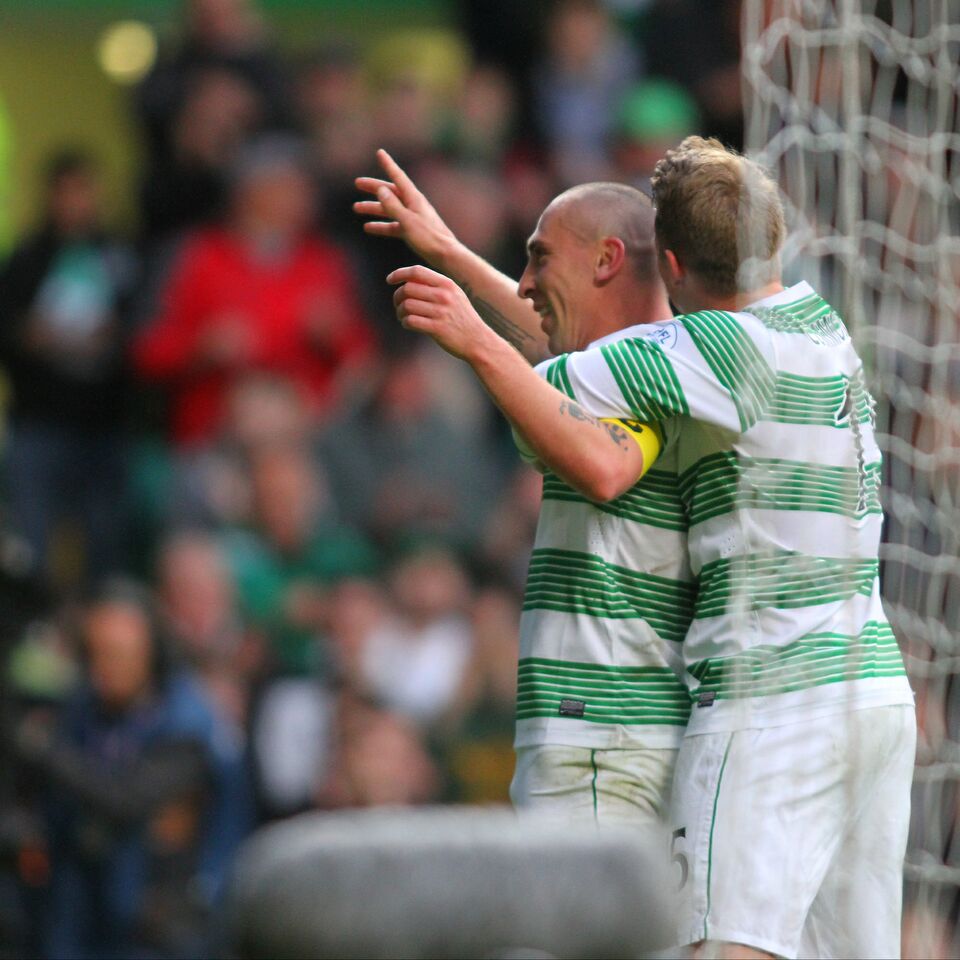 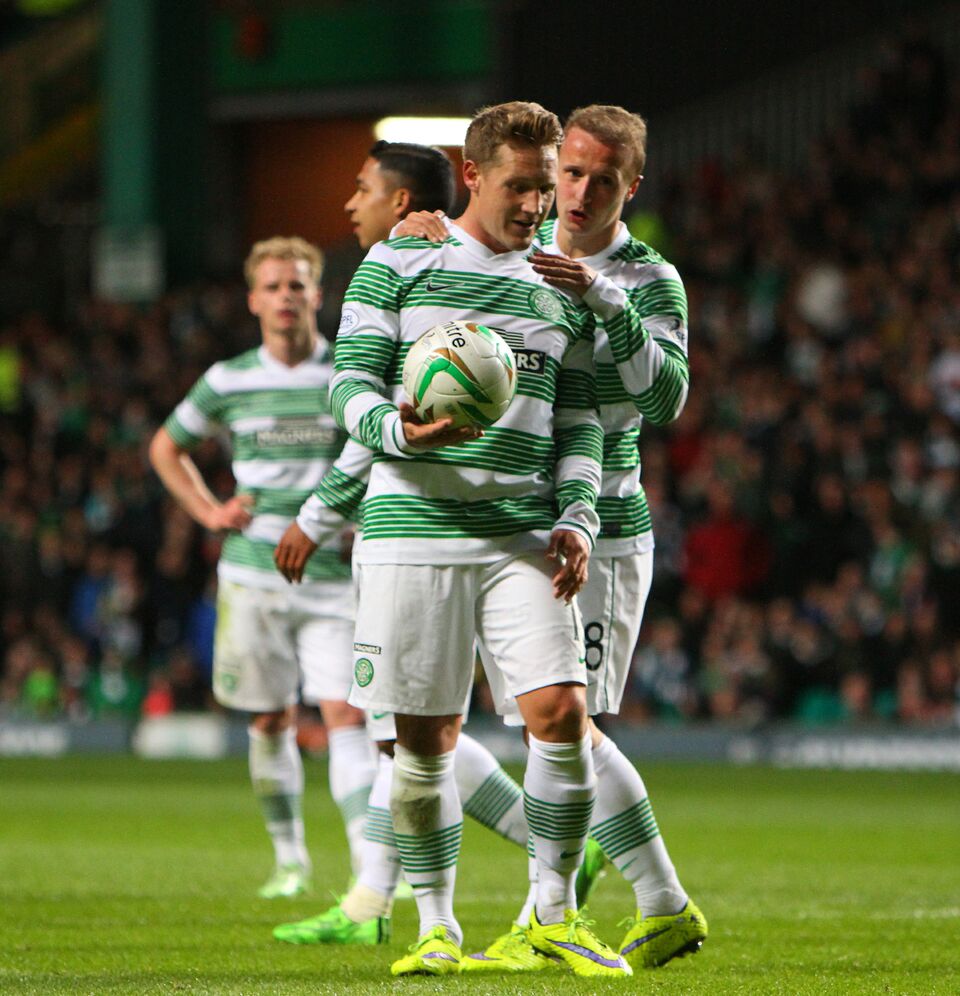 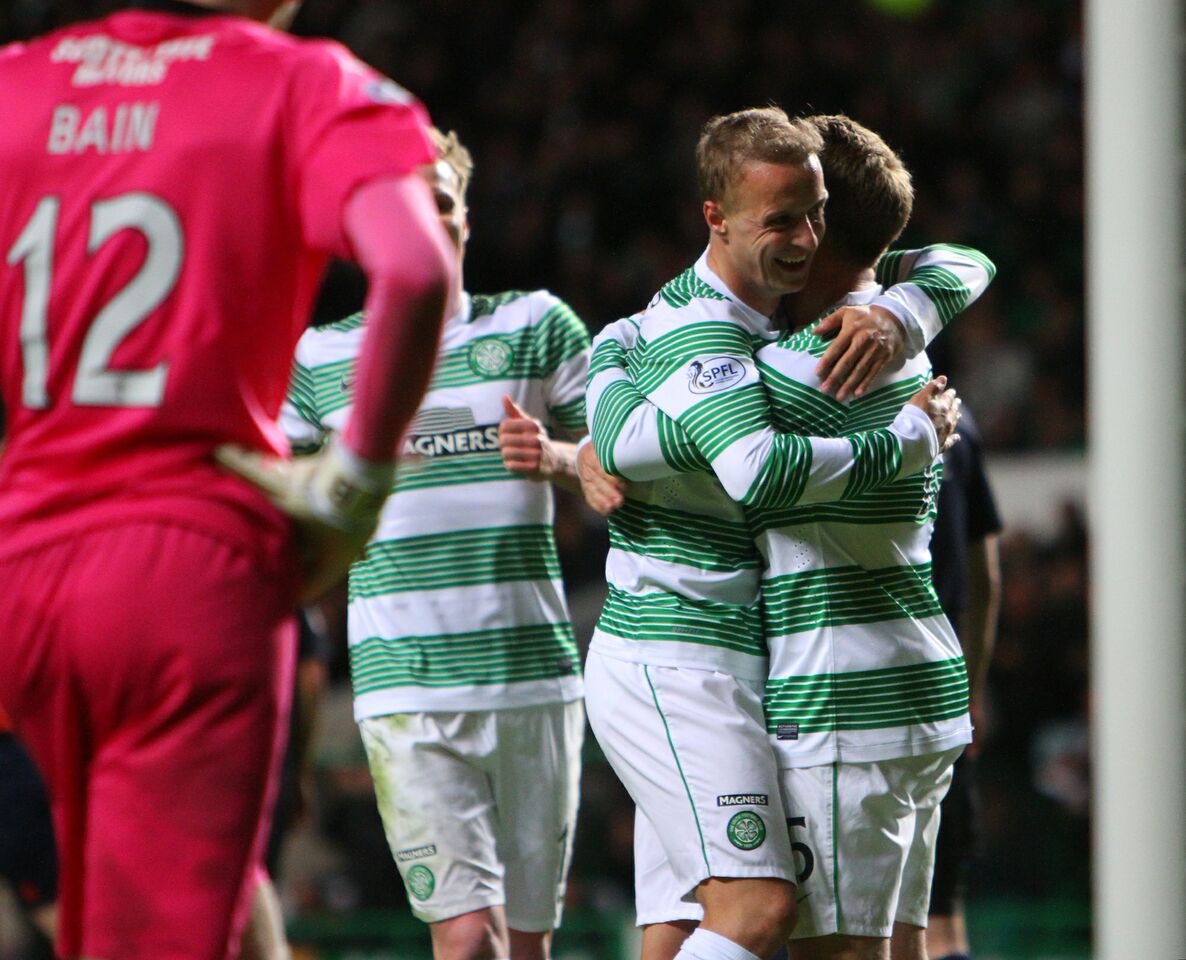 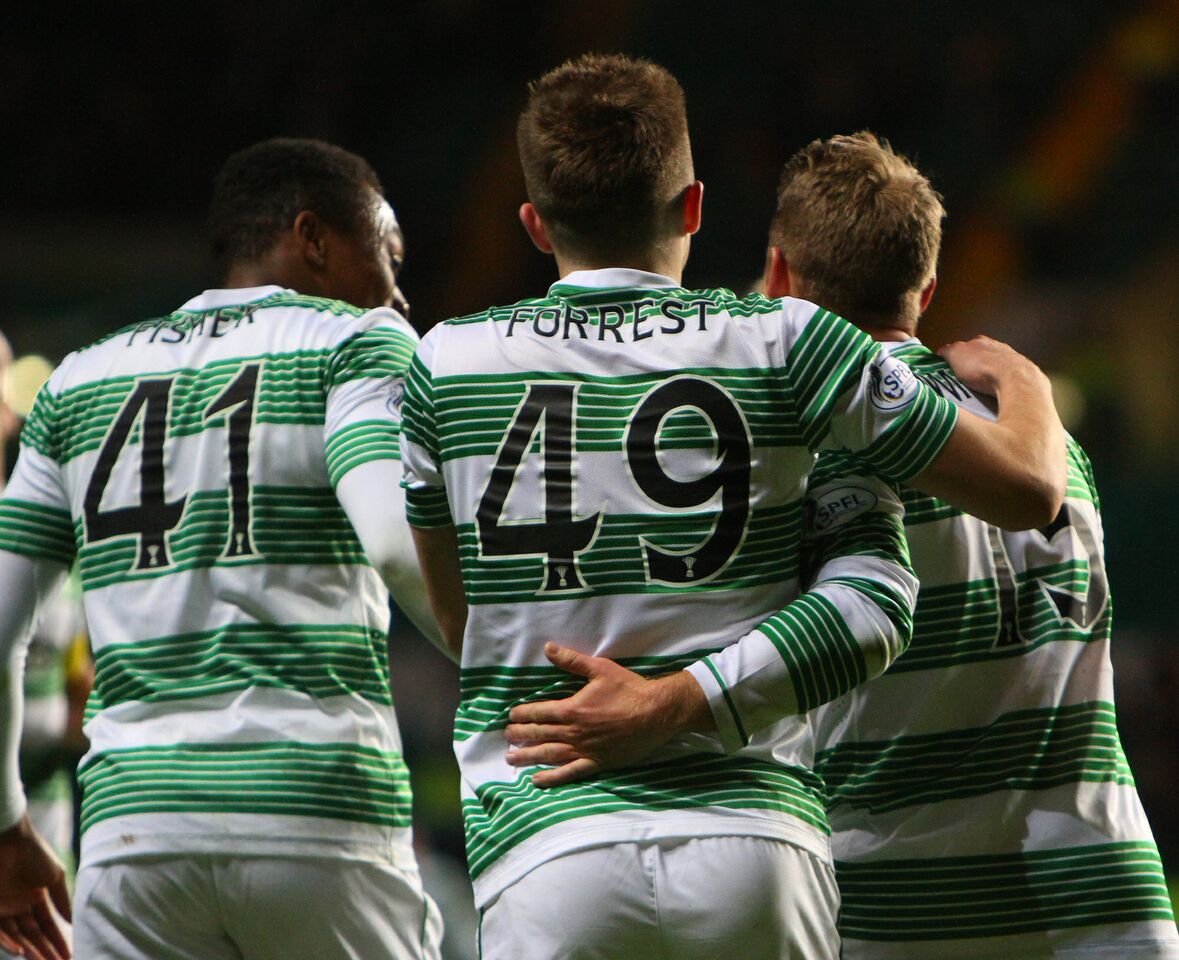 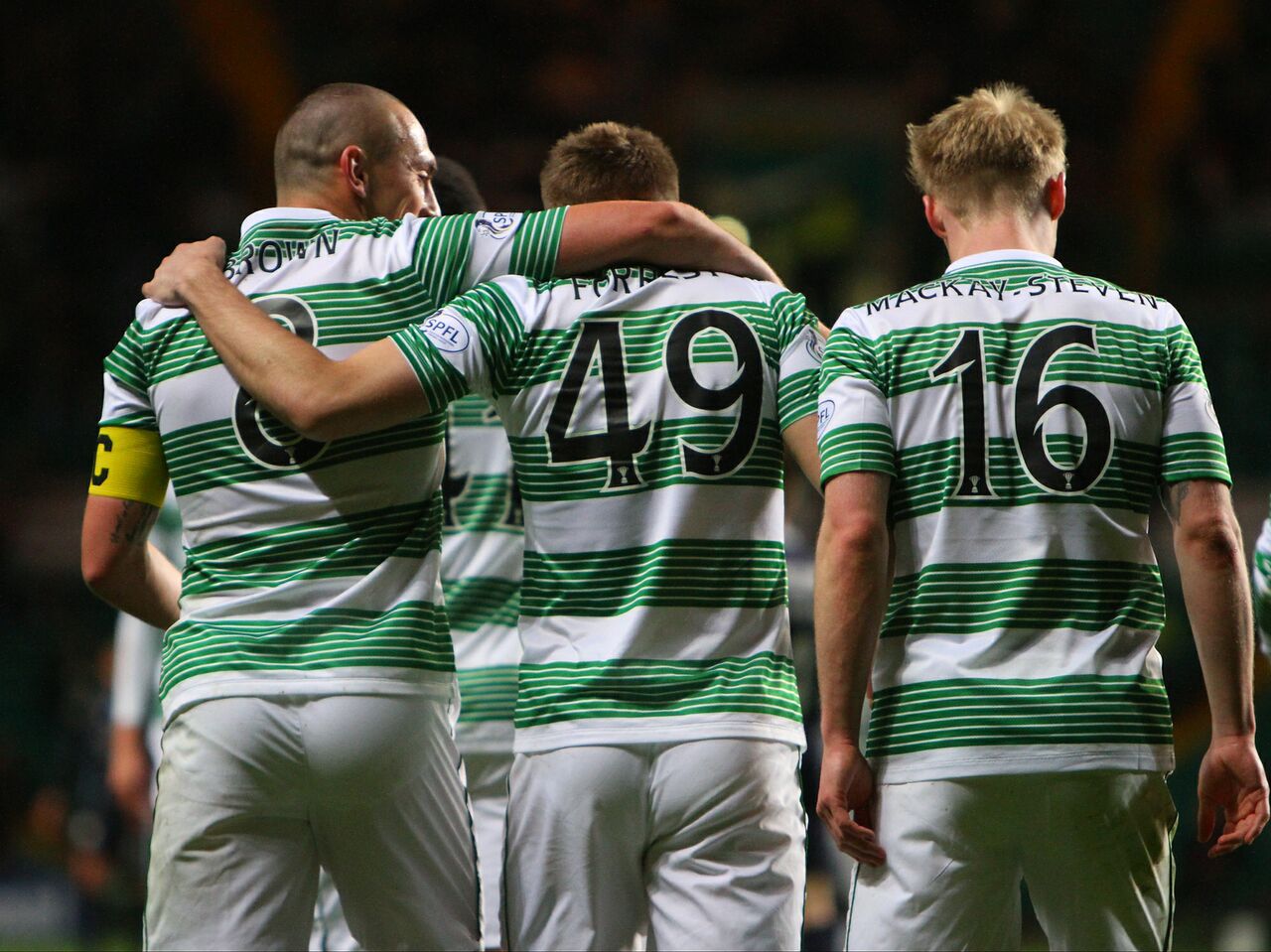 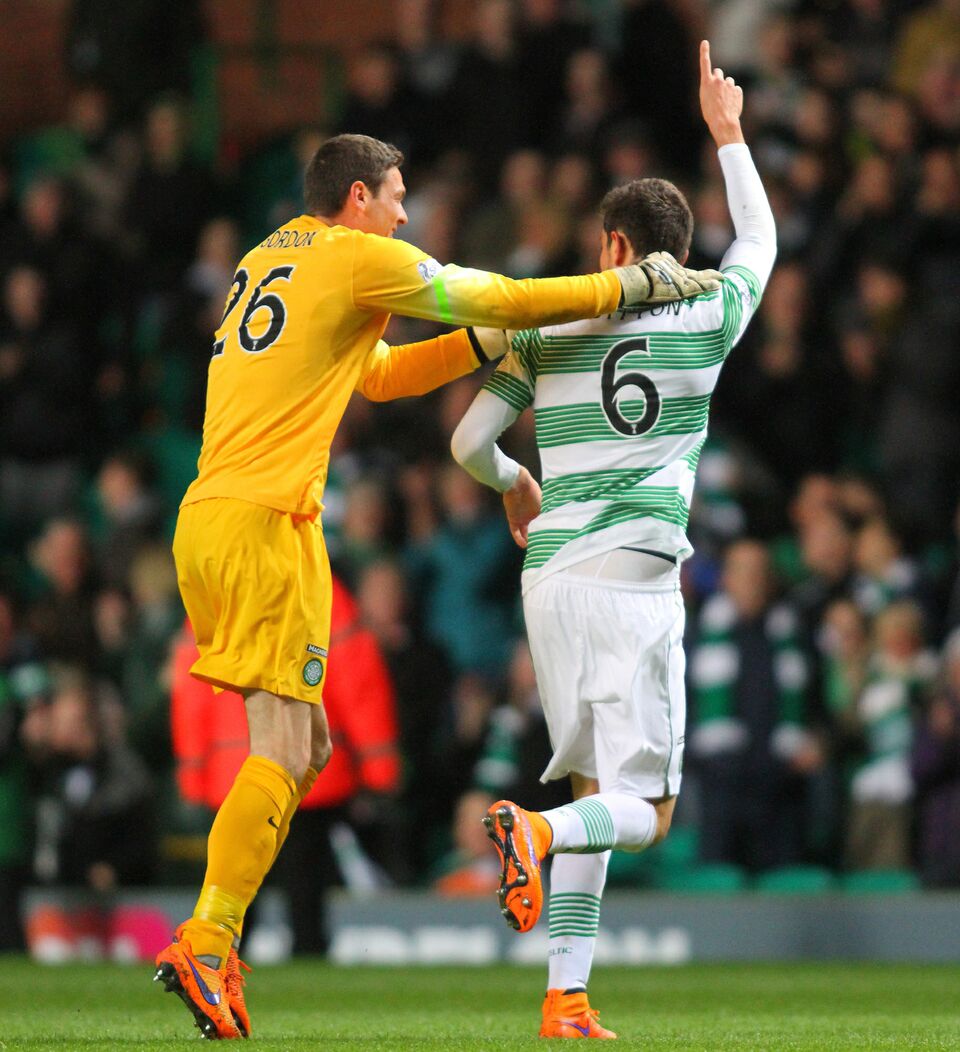 The wonderful Emilio Izaguirre, after working a quick throw-in, was left unguarded as he swept over an inviting cross. Griffiths’ timing was impeccable as he rose about Thomas Konrad to thump a ferocious effort from just about the penalty spot past the sprawling Bain.
In quickfire fashion, the magnificent Scott Brown doubled the Hoops’ advantage. It was an outrageous piece of team work as every Celtic player, including keeper Gordon, was involved in a move that saw the ball moved around with pace and precision.
When it reached Jason Denayer he shoved it in front of Johansen who swiftly switched it to Griffiths. He picked out Kris Commons and his clever flick found Scott Brown arriving bang on time to smack the ball into the net past the exposed keeper.
Celtic had to wait until the 71st minute for the third goal (we predicted after the Hampden ‘Honest Mistake’ that the MIBs would start to give Celtic penalties when 2-0 up and that’s two games in a row it’s happened – these things “even themselves up” after all) and it came via the penalty spot after Stephen McGinn sent substitute Darnell Fisher, an impressive substitute for Efe Ambrose, clattering to the ground. There was no argument from the visiting players and even Madden had to award the stonewaller. The move was created when an exquisite lob from Nir Bitton bounced off the crossbar.
Commons took the award and drilled a powerful effort to Bain’s left as the keeper took off for the right. 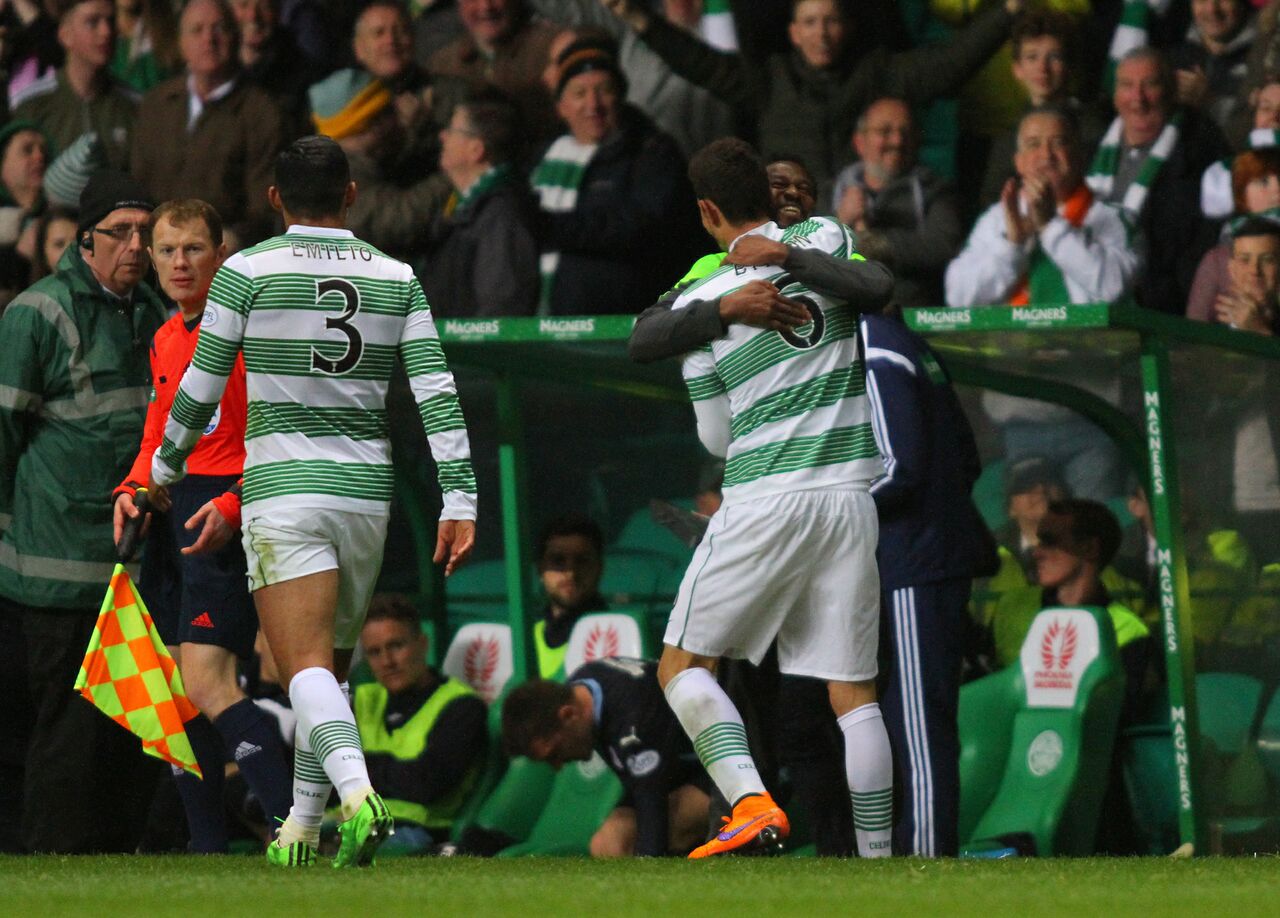 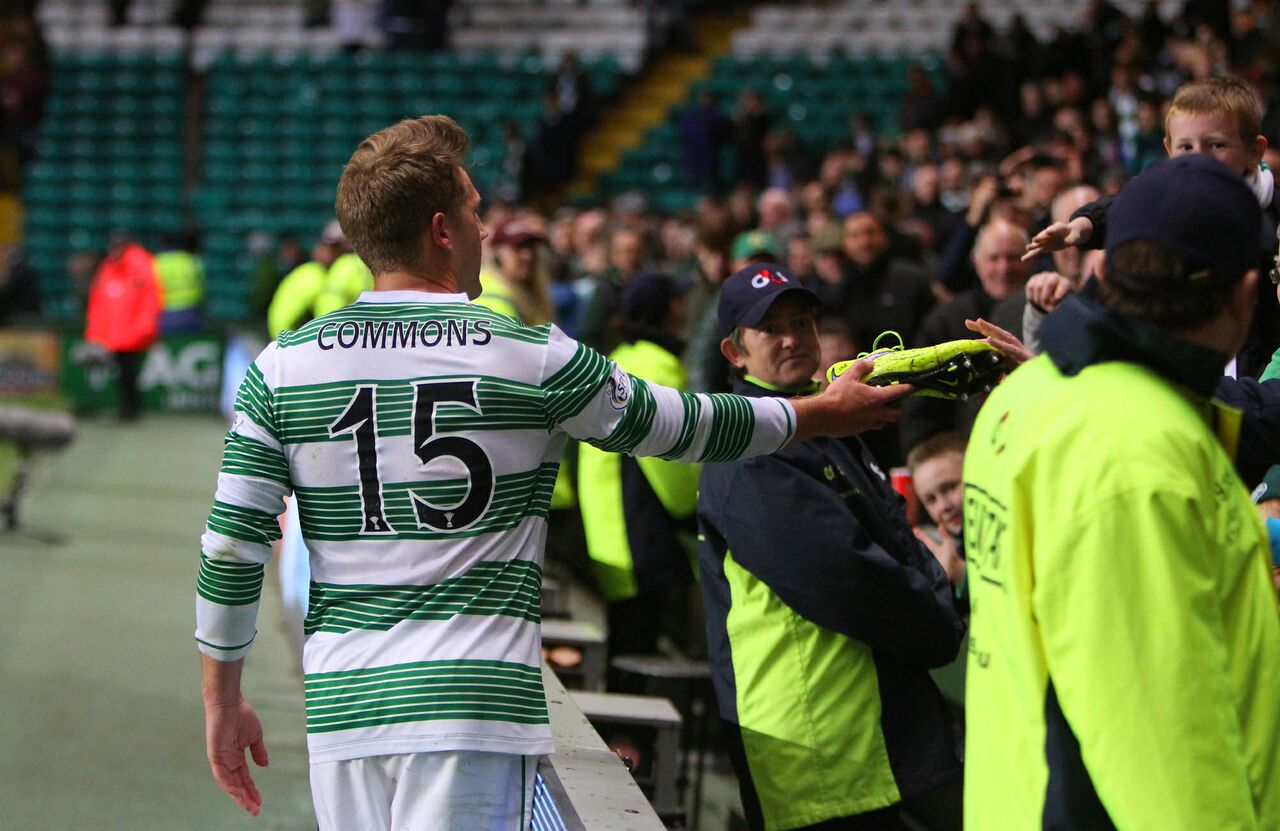 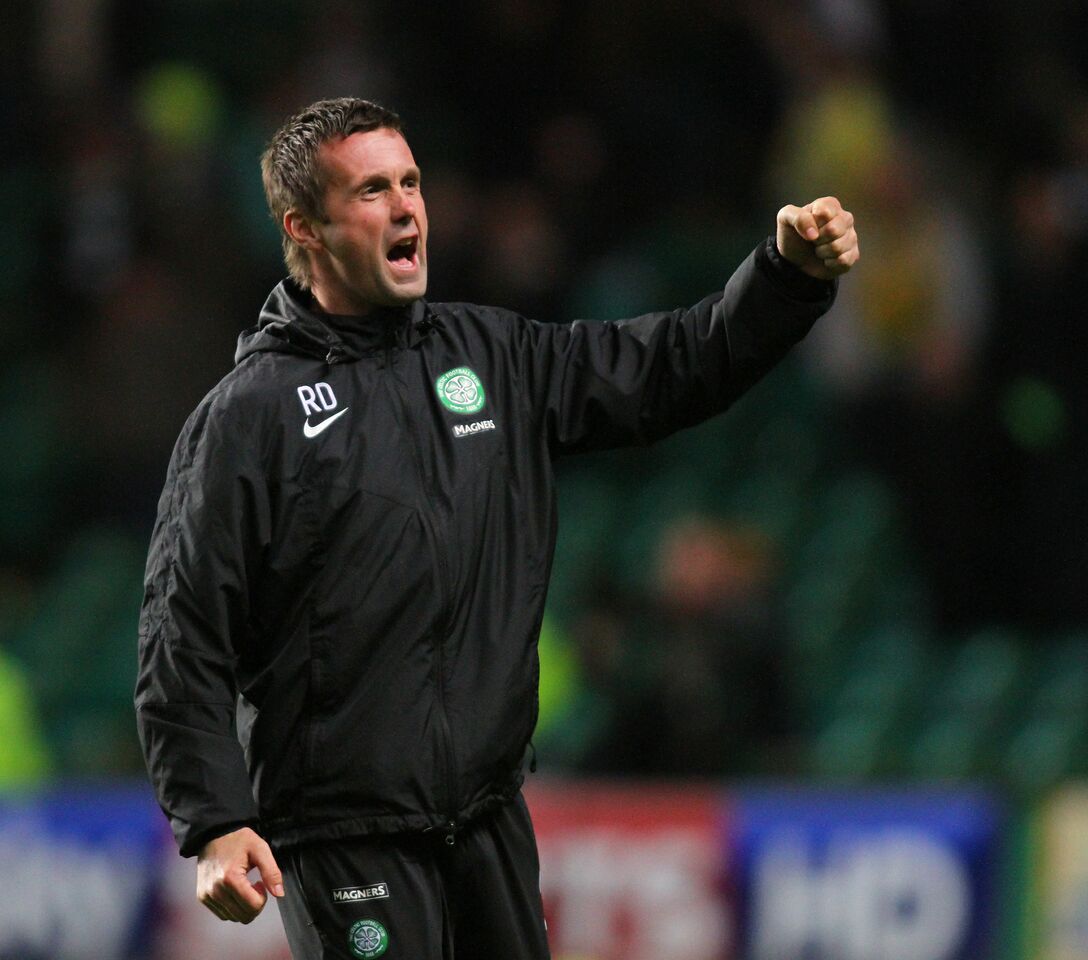 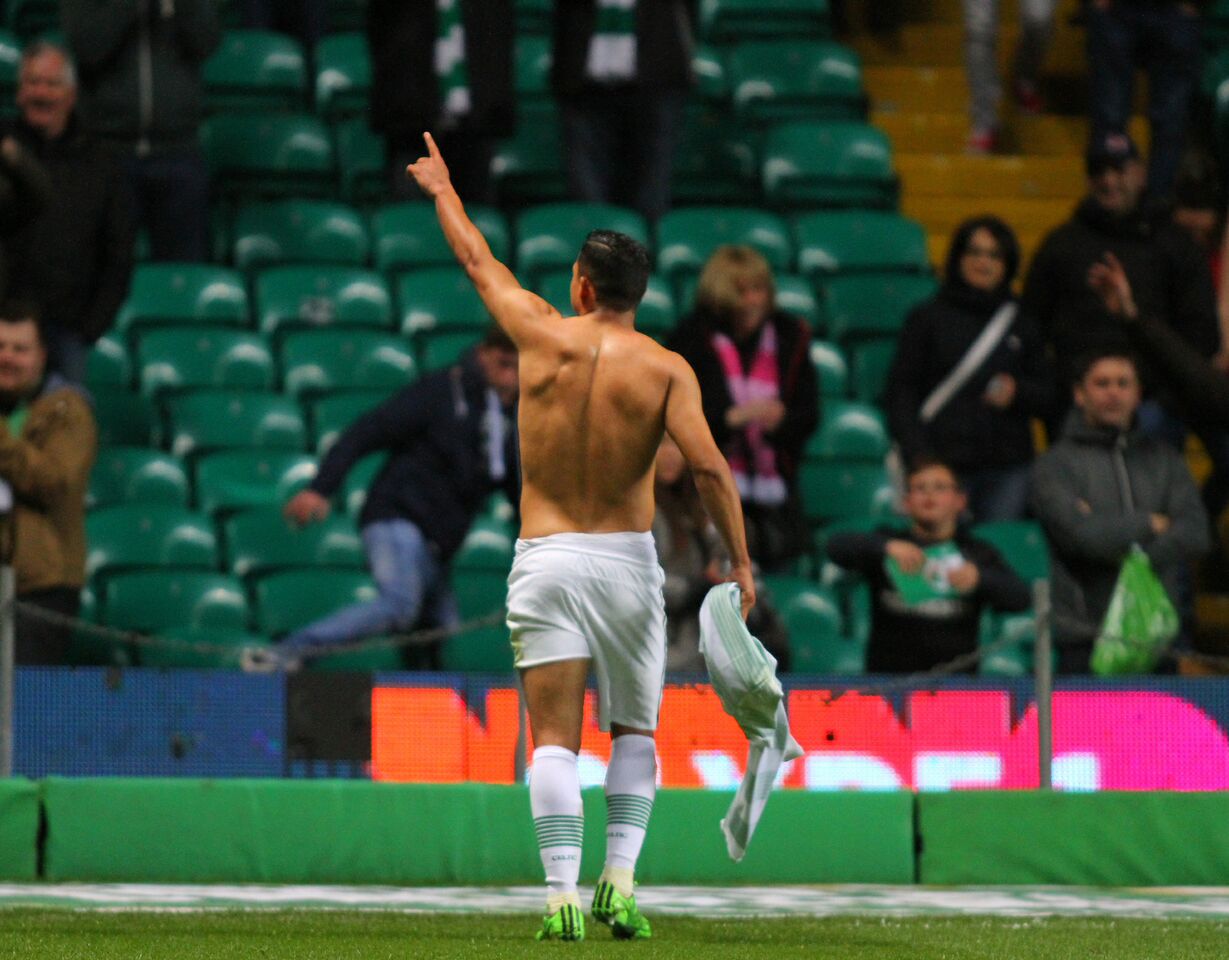 It was party time as the Hoops knocked the ball around and it was no surprise when another sub James Forrest, on for Johansen, zipped in No.4 after being released by a crisp Commons through pass.
The best goal of a convincing performance, however, was reserved for Israeli ace Bitton two minutes from the end.
He nonchalantly struck a curling effort from 35 yards and his lazy-looking effort simply bamboozled Bain as it struck the inside of his left-hand post before flashing into the net.
It was a goal worthy of winning a championship. And that just might be the case when the smoke clears at Tannadice tomorrow.
A big shout to the Green Brigade who where simply wonderful this evening. Their “Here we go, ten in a row” chant lasted about 15 minutes in the second half and was infectious. Hopefully the TV audience picked up on the atmosphere.
Shouldn’t we be signing abut 13 in a row? In Ronny we trust.
TEAM: Gordon 7 ; Ambrose 7  (sub: Fisher 65mins 6), Denayer 8, Van Dijk 8, Izaguirre 9; Brown 10, Bitton 8 ; Commons 9, Johansen  8(sub: Forrest 65 mins 8), Mackay-Steven 8; Griffiths 8 (sub: Scepovic 75mins 6).
Click Here for Comments >
Share. Twitter Facebook Google+ Pinterest LinkedIn Tumblr Email
Previous ArticleCeltic v Dundee, Live updates
Next Article Official Highlights: Celtic 5 – 0 Dundee