Celtic Quick News on News Now
You are at:Home»Match Report»CELTIC 5 HIBS 2: GREAT SCOTT AT THE DOUBLE AS HOOPS HAVE FINAL SAY
By CQN Magazine on 2nd November 2019 Match Report

SKIPPER Scott Brown claimed two strikes as Celtic booked their place in the Betfred League Cup Final next month after an emphatic performance against Hibs this evening.

The 34-year-old midfielder led by example on a night the holders put down a marker on their way to their fourth successive Hampden showdown in the competition.

Mohamed Elyounoussi, Man of the Match by some distance, also netted twice with Callum McGregor adding the other.

Credit to the Edinburgh side for a gallant performance, especially in the second-half as they really had a go at the champions.

But in the end, the Parkhead side had too much quality and firepower for their opponents and Brown may well be thinking of a swift edit on his new DVD to include this evening’s heroice. 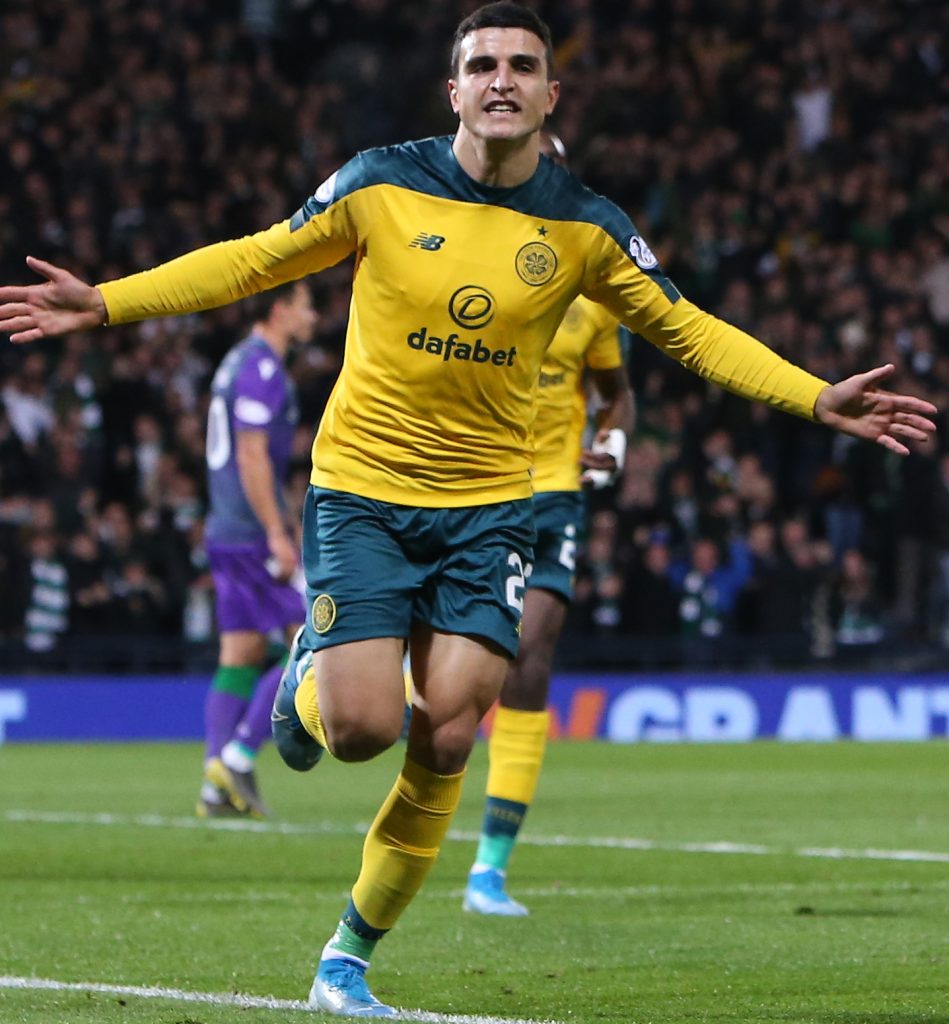 MAGIC MO-MOMENT…Mohamed Elyounoussi races away after heading the Hoops into the lead.

Two goals in four first-half minutes gave dominant Celtic the cushion they had sought right from the kick-off. They stormed forward in droves towards Hibs keeper Chris Maxwell as they attempted to make sure there was no room for a shock.

With Jeremie Frimpong and Boli Boligoli raiding on the flanks, the Edinburgh outfit were on the back foot for most of a first-half where the holders dictated play.

The opening goal came in the 17th minute and was the end product of some slick leading-up play and an excellent cross from the right. Odsonne Edouard rolled the ball wide to the rampaging James Forrest on the right and the winger clipped over an exquisite ball to the far post.

Elyounoussi was perfectly positioned to get his head on the cross and his bullet-like effort flew over Maxwell’s flailing arms into the net.

JOY BHOY…Callum McGregor shows his delight at his goal.

And Neil Lennon’s men were celebrating again in the 21st minute after the Hibs back lot were shredded when Christopher Jullien found his countryman Edouard with a through pass. Offside? It was a marginal call, but the match officials allowed play to go on.

That was all the elegant striker required to drive into the box and pick out McGregor with a slide-rule pass and the midfielder didn’t break stride as he thumped the ball into the gaping net from close range.

There had been a penalty-kick shout just moments before the opening goal when Paul Hanlon clearly handled a Kristoffer Ajer header after a left-wing corner-kick, but referee Bobby Madden was having none of it.

Elyounoussi came close to a third goal in the 26th minute with a clever low drive that was deflected wide of the left-hand post with Maxwell scrambling.

Six minutes later, Forrest, looking lively once again, came inside to fire in a low shot, but he dragged his finishing effort just wide of the post.

Out of nowhere, though, some slack defending allowed Hibs to haul themselves back into the encounter. The rearguard was sloppy as it dealt with a routine free-kick from the right wing.

Jullien and Ajer had the chance to clear, but dithered and the ball eventually cannoned off the unfortunate Bolingoli into the path of Melker Hallberg and he was allowed a free shot from eight yards and he tucked it behind Fraser Forster who got a touch, but couldn’t deflect it to safety.

BACK OF THE NET…Mohamed Elyounoussi snaps up Odsonne Edouard’s service for the third goal.

Celtic, however, restored their two-goal advantage a minute from the interval. Frimpong, Rogic and Edouard were involved in some neat play and Elyounoussi slammed in the third from four yards.

At the start of the second-half, Jonny Hayes was introduced for Bolingoli who looked to be toiling as the first 45 minutes ground to a halt.

The Hoops were out of luck twice in a matter on minutes when Elyounoussi cut away from a floundering Hibs defender to flash a shot wide of Maxwell, but his attempt smashed off the inside of the left-hand post and bounced straight back to the keeper.

And then Forrest cut inside to try his luck from the edge of the box, but his drive took a touch off an opponent and thumped against the other upright.

In the 56th minute, though, Celtic did claim a fourth goal when Maxwell fumbled a left-wing corner-kick from Elyounoussi and Brown was on the spot to hammer in from close range. 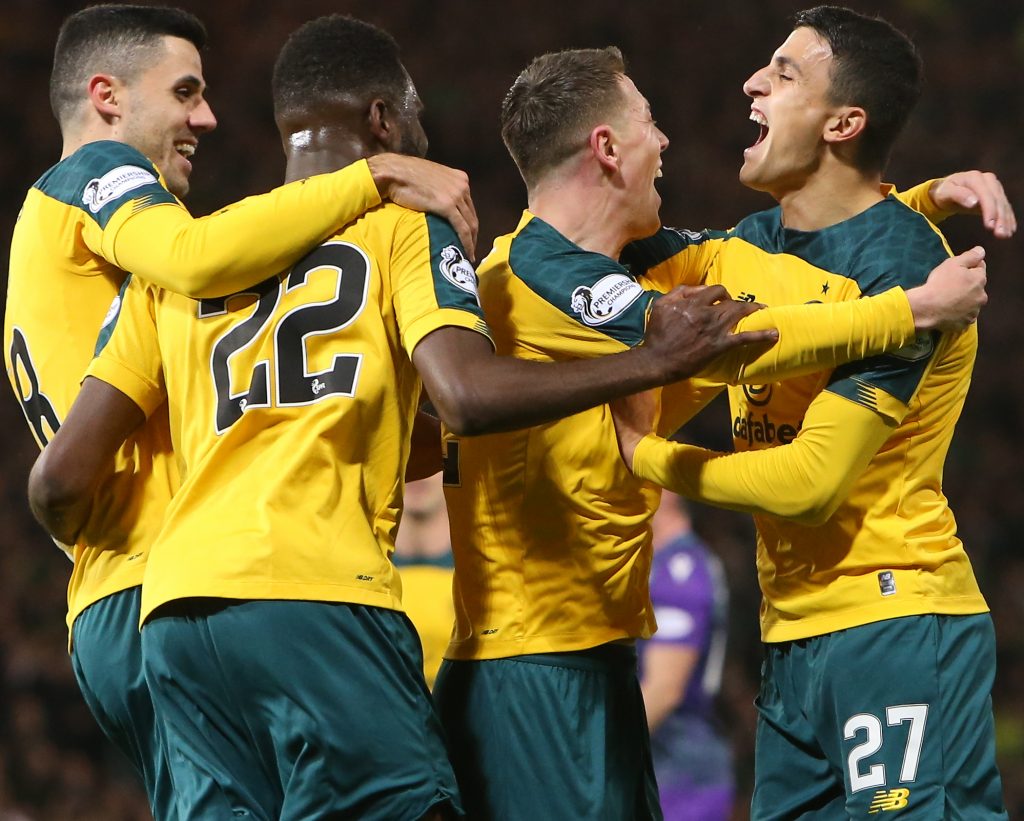 Within seconds, Hibs had pulled one back when the rearguard went to sleep as a diagonal ball came in from the right. Florian Kamberi was allowed to get in front of Ajer to flick a header wide of the helpless Forster.

Lennon threw on Hatem Abd Elhamed and Ryan Christie for Forrest and Rogic as he freshened up the team with the Final in sight.

It was all over in the 90th minute when Brown worked a one-two with Elyounoussi and blasted a shot against Maxwell. The captain retrieved the rebound and this time made no mistake with a left-foot effort.

It was a real captain’s part by Brown and the quadruple is on!