AFTER seven months in the darkest shadows battling the torment of depression, Leigh Griffiths returned to the spotlight of the centre stage at Parkhead tonight.

With the immaculate timing of an experienced showman, the striker, making his first competitive start in 2019, scored with a classic free-kick for Celtic’s third in a late blitz before the interval against the Estonians in the first leg of the Champions League second round encounter.

It was Griffiths’ first goal since a strike against Hamilton Accies on November 24. Ironically, on that occasion, it was also a perfect set-play and, remarkably, the third goal, too.

Deep into first-half stoppage-time with Neil Lennon’s men two ahead following efforts from Kristoffer Ajer and Ryan Christie, the referee awarded a free-kick 25 yards out. It was certainly Griffiths’ territory – and the comeback Bhoy was well aware of the fact.

The crowd was hushed as the popular Celt took his run-up and there was a massive release of elation and relief as the ball arrowed into the keeper’s top left-hand corner. No doubt it will be the first of many from the 28-year-old international in this campaign.

Two additional goals duly arrived in the second-half from Christie and Callum McGregor to virtually book a place in the third stage ahead of the return tie on Tuesday. 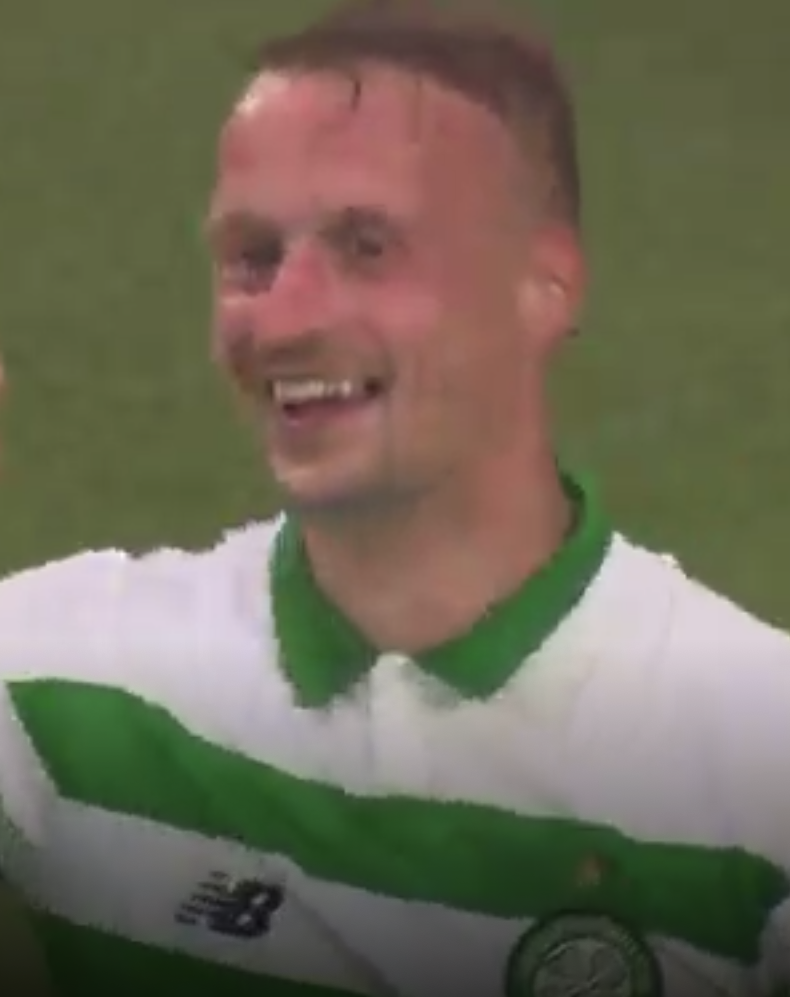 A MOMENT’S REFLECTION…Leigh Griffiths kneels behind the goal. 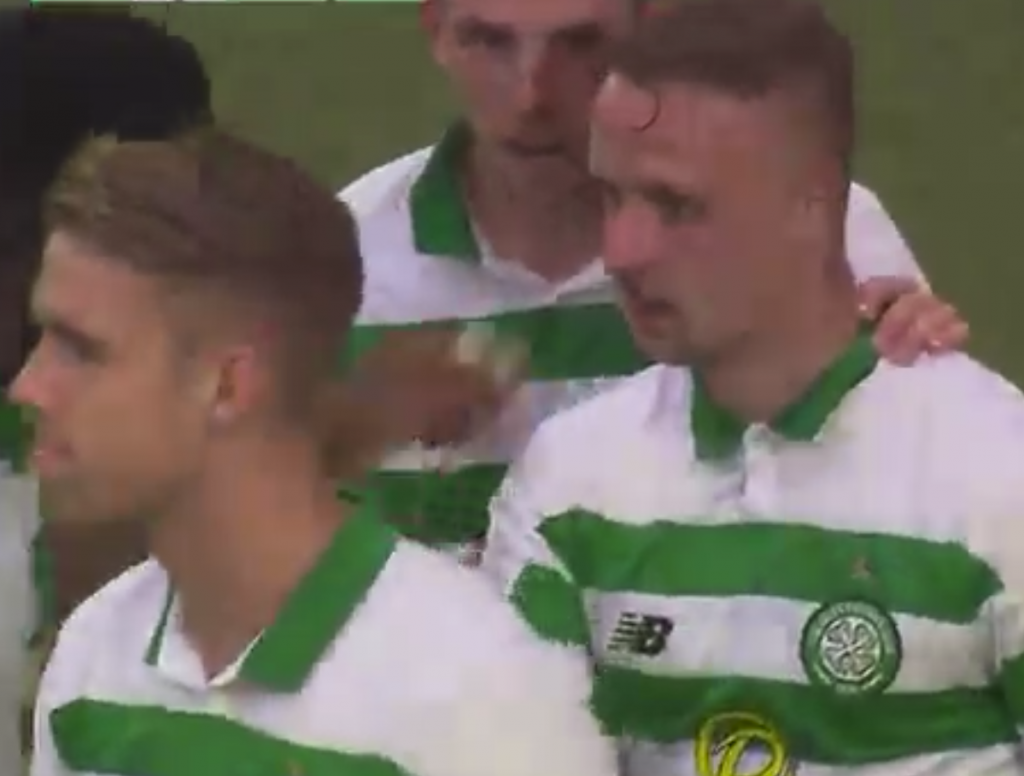 BACK IN THE OLD ROUTINE…Leigh Griffiths is congratulated by his team-mates after his first goal of 2019.

The first real opening came in the sixth minute when Jozo Simunovic came so close with a back-post header from a well-flighted right-wing corner-kick from Griffths.

Four minutes later, Christie tried his luck from outside the box, but was thwarted when the keeper clawed it away in unorthodox fashion. Even this early in the encounter, the pattern had been set with the Hoops relentless going forward and the Estonians defending in depth.

There were howls of derision from the fans when Boli Bolingoli was the victim of a clear two-footed tackle just outside the box, but, remarkably, the referee waved play on.

In the 15th minute there was a momentary scare for the home side when a ball across from the right just eluded frontman Peeter Klein smack in front of goal and the ball carried to safety.

Three minutes later, normal service was resumed when McGregor and Odsonne Edouard combined, but the Frenchman’s effort was knocked past the post for a corner-kick. Griffiths’ left-wing delivery found the £10million hitman, but, unfortunately, his header struck team-mate Simunovic and rebounded to safety.

Next up, a Griffiths 25-yard free-kick took a touch off the wall and spun into the path of Scott Brown who lunged forward to get a foot to the ball to send it goalwards. Keeper Pavel Londak, however, raced from his line to block the shot and once again the visitors escaped punishment.

In the 21st minute, James Forrest set up Christie who skipped past a challenge to race into the box, but the playmaker dragged his shot wide of the right-hand post. He really should have hit the target. 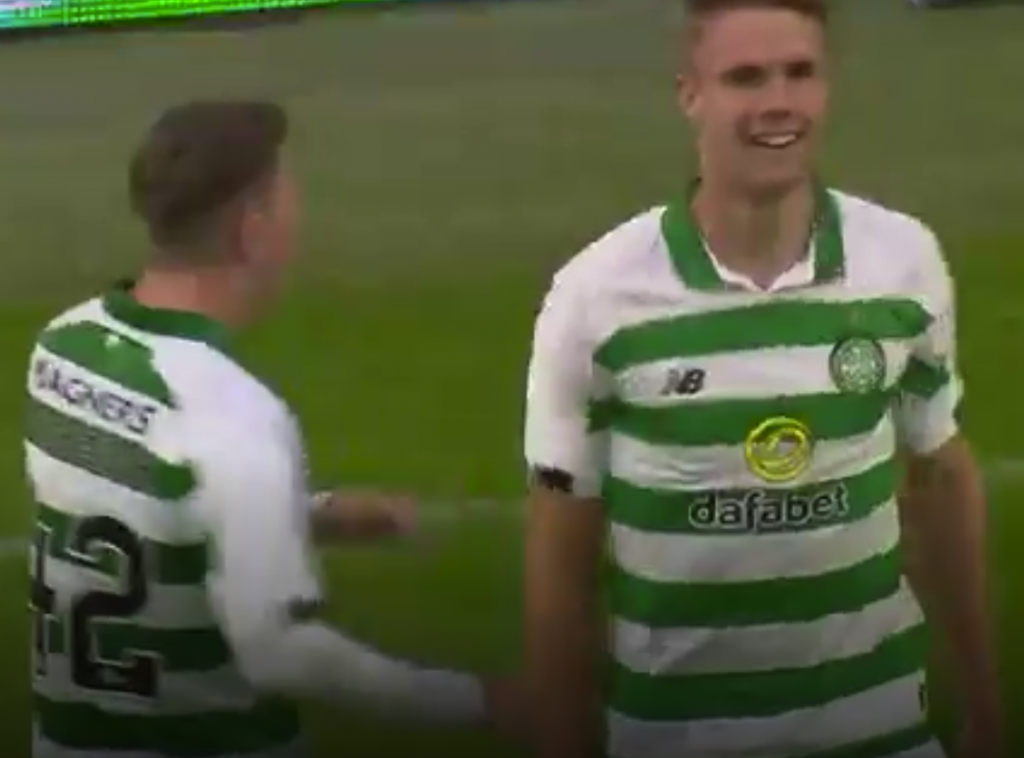 HEAD START…Kristoffer Ajer is all smiles after nodding the Hoops into the lead.

The breakthrough goal arrived in the 36th minute after Edouard had once again been hauled to the ground on the left. Christie curled in a delicious free-kick that fell invitingly for Ajer and the Norwegian’s header rocketed into the net from six yards via the underside of the crossbar. It was textbook delivery and execution from the Celts.

Moments later, Bolingoli, who had earlier received treatment for a knock, trudged off to be replaced by Mikey Johnston.

A minute from the interval, the Danish match official spotted a handball in the Kaluj box and had no hesitation in pointing to the spot.

Christie took the award with a fair bit of nonchalance and no little skill as he swept it left-footed low into the corner of Londak’s net as the keeper took off in the wrong direction to his right.

SPOT ON…Ryan Christie sweeps in the perfect penalty-kick for No.2.

Two minutes into first-half stoppage-time came the moment Griffiths has waited for so long when he scored his first goal in seven months. Once again, it was a trademark free-kick and it was a goal in moment it left his trusty left foot.

He timed it perfectly from 25 yards and the keeper was helpless as the ball hurtled high past his left hand into the top corner.

Griffiths took the congratulations of his team-mates and the sheer outpouring that swept around the stadium was nothing short of exhilarating. Welcome back, Leigh!

He lasted until the 59th minute when he was replaced by Lewis Morgan and made his exit to a standing ovation from the appreciative audience. 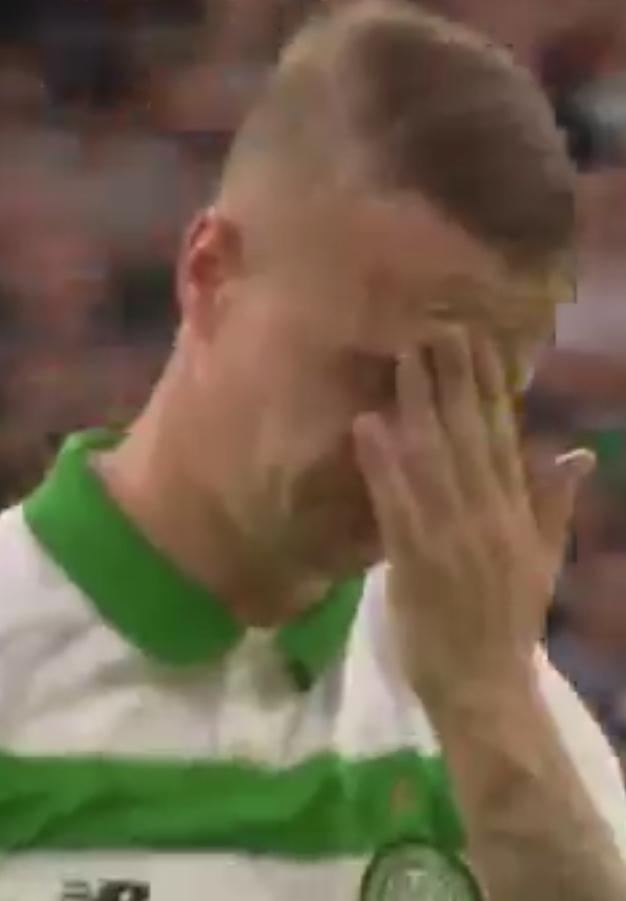 Estonian keeper Londak was the busiest man on the pitch and made good saves from Johnston, Christie and Edouard as the Hoops threatened to run amok.

In the 65th minute, Christie left him helpless as he notched the fourth with an unsaveable arcing ball that zeroed high into the top right-hand corner. Morgan was involved in the lead-up with some clever play. 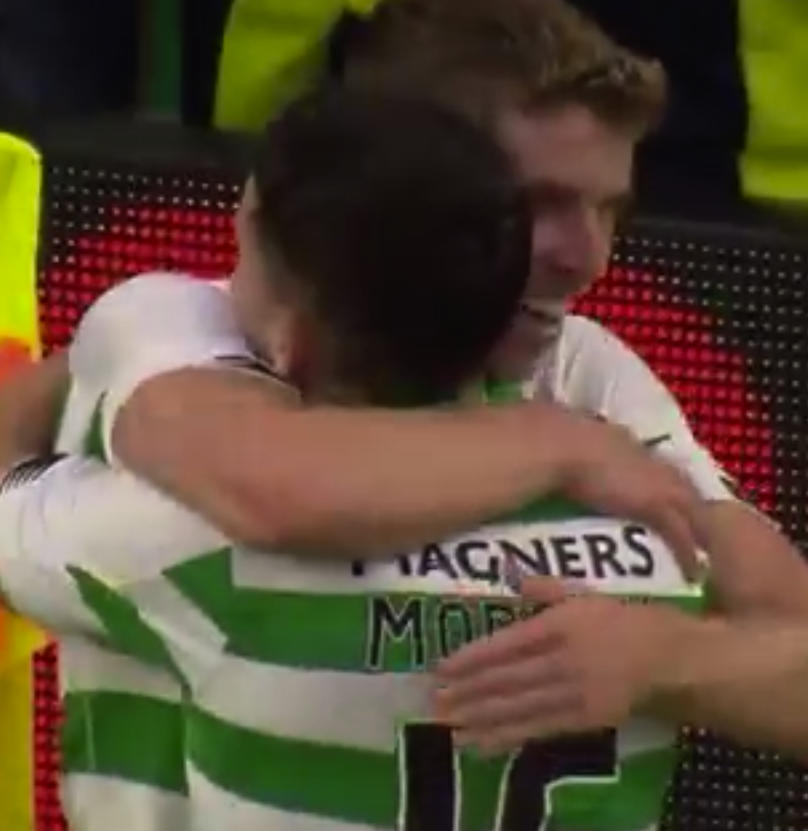 FOUR GOODNESS SAKE…Ryan Christie is congratulated by Lewis Morgan after netting No.4. 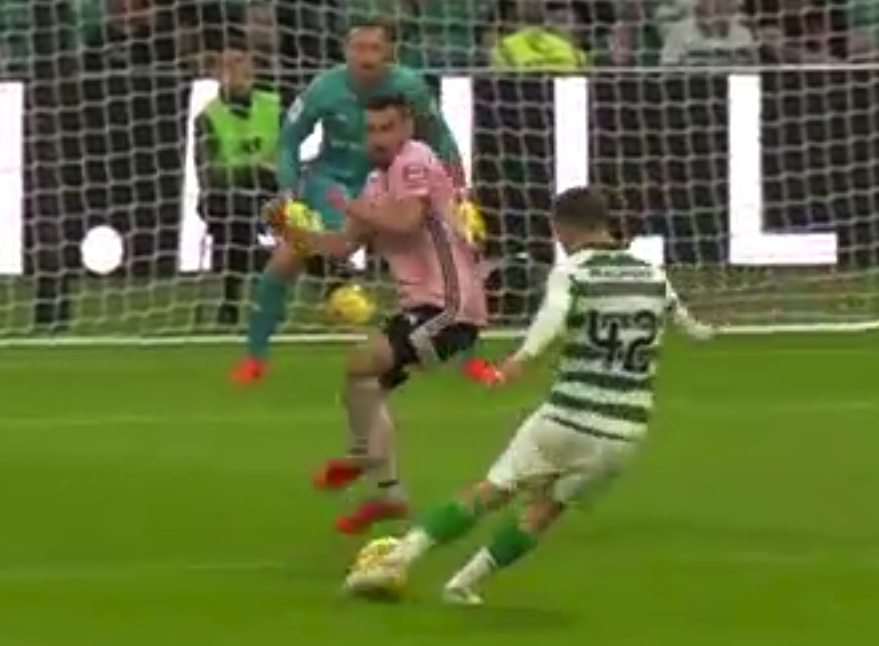 FIVE ALIVE…Callum McGregor drills in the final goal to bring down the curtain on a professional performance from the Hoops.

Six minutes later, the Highlander was given a rest as Lennon replaced him with Olivier Ntcham and, like Griffiths, he departed the scene to warm applause.

In the 77th minute, a five-star show was rewarded with a fifth goal as McGregor sizzled in a low left-foot angled drive from the edge of the box that zipped beyond the sprawling and helpless keeper.

Celtic are in the third stage, barring a disaster, and will now play either Cluj or Maccabi Tel Aviv with the Romanians taking a 1-0 first leg lead to Israel next week.

Neil Lennon’s jigsaw is coming together.