TWO goals in the blistering space of one minute and 33 seconds kept Brendan Rodgers’ silverware express on track as they overwhelmed the Saints in the Scottish Cup at Parkhead this afternoon.

Celtic went into the record books with their TWENTY-FOURTH successive domestic Cup triumph, yet another unprecedented achievement in the Irishman’s reign and the club will now go into the quarter-final draw on Monday evening.

The History Bhoys were already coasting with a two-goal advantage, courtesy of strikes from Scott Sinclair and Scott Brown, when they ended the game as a contest

Shortly after the interval, the holders  stepped up a gear as they ruthlessly went for the jugular and James Forrest, the scourge of Saints, thumped in a third and, only moments later, Sinclair claimed a fourth.

A minute from time, the maverick Englishman claimed a scintillating hat-trick.

It took the holders inside three minutes to break down the Saints resistance. It was a sweet-flowing move on the right involving Forrest and Jeremy Toljan with the ball being fed through to the strong-running Oliver Burke.

The on-form Scotland international carried the ball forward menacingly before expertly cutting a pass low across the penalty area.

Richard Foster lost Sinclair for a moment and it was to prove fatal for the visitors. The Englishman timed his run forward to perfection before firing a left-footed angled drive between the startled Zander Clark and his near post.

The keeper, a hero against the Hoops in the previous two meetings when he kept the score down to 2-0 on each occasion, got his angles all wrong on this occasion, but it would be harsh to blame the Perth No.1.

NUMBER ONE…Scott Sinclair (left) runs behind the goal after snapping up the first goal with an angle drive past Zander Clark following a pass from Oliver Burke (extreme right).

And Clark was beaten again six minutes later when a screamer from skipper Brown rattled into the top left-hand corner.

The Hoops midfielder doesn’t score too many – this was his first for two years – but when he does get his name on the scoresheet it is normally in the special category. This one was no exception.

Brown took a touch following a wayward clearance from the panicking Saints defence and simply zipped a thunderous 25-yard effort high past the goalie  who was utterly helpless on this occasion.

And how the captain, who recently agreed a two-year extension, enjoyed the moment as he whooped with joy. Who could blame him? It had been 104 games since his last strike! 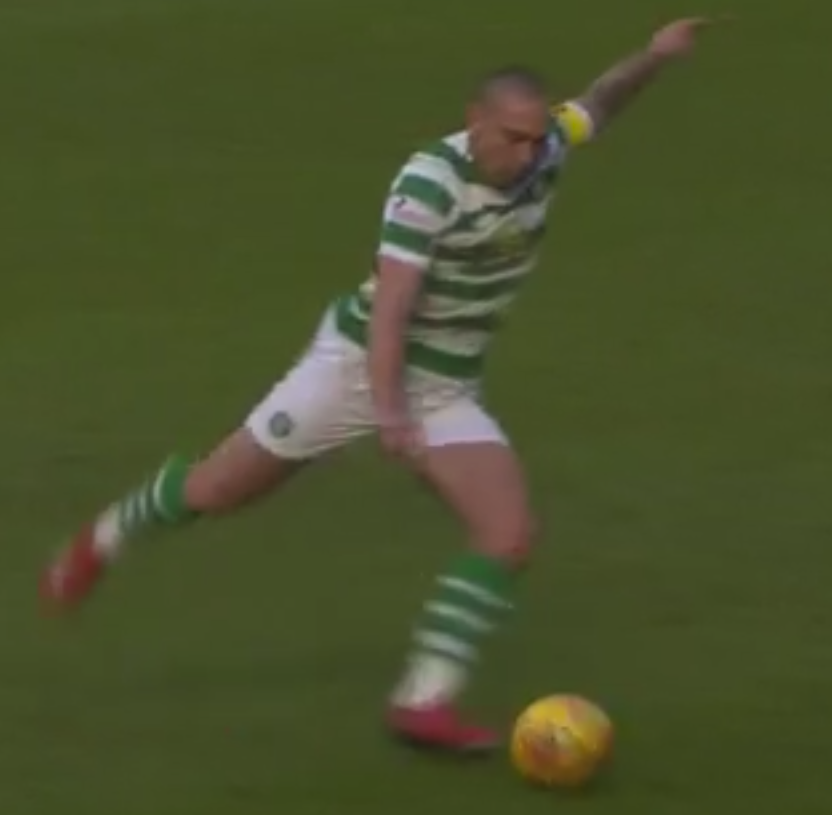 HERE WE GO…Scott Brown lines up his shot as he prepares to have a go at goal.

WHOOSH! The skipper’s unstoppable drive thunders into the roof of the Saints net.

It had been a fast and furious start from Rodgers’ side as they came out the traps at a ferocious pace.

Celtic had clearly been sent out with instructions to take control of the game and the players responded to the promptings of their manager.

Just before the half-hour mark, there was a superb sweeping move started by Scott Bain with a long ball down the right. It was switched around with Forrest and Toljan again involved, but the pass forward to Sinclair, going through the centre, was just a little heavy.

Within a minute, Bain made a breathtaking save to his right to defy Chris Kane. Jonny Hayes was exposed on the left as the ball was delivered in front of the Perth frontman who struck it first time.

The Hoops No.1 displayed lightning reflexes to hurtle to his right to touch the ball round the post.

UNBEATABLE…Scott Bain swoops to his right to push away a shot from Chris Kane.

In the 33rd minute, Burke accelerated away from Joe Shaughnessy on the right, but, unfortunately, his low cutback was just missed by Sinclair at the near post.

It was impressive stuff from the Hoops as they moved the ball around swiftly and accurately with Brown, Ryan Christie and Callum McGregor always eager to participate and keep the team moving in the right direction.

Kristoffer Ajer replaced Jozo Simunovic at the start of the second-half with the Croatian central defender feeling out of sorts during the interval. It could have been the same bug that flattened Olivier Ntcham before the game. The Frenchman was listed as a sub, but had to call off with Mikey Johnston taking his place on the bench.

Six minutes after the interval, Christie released Burke who could have carried it on, but decided to have an early shot and his effort lacked oomph and accuracy and Clark flopped on the ball to make a comfortable save. 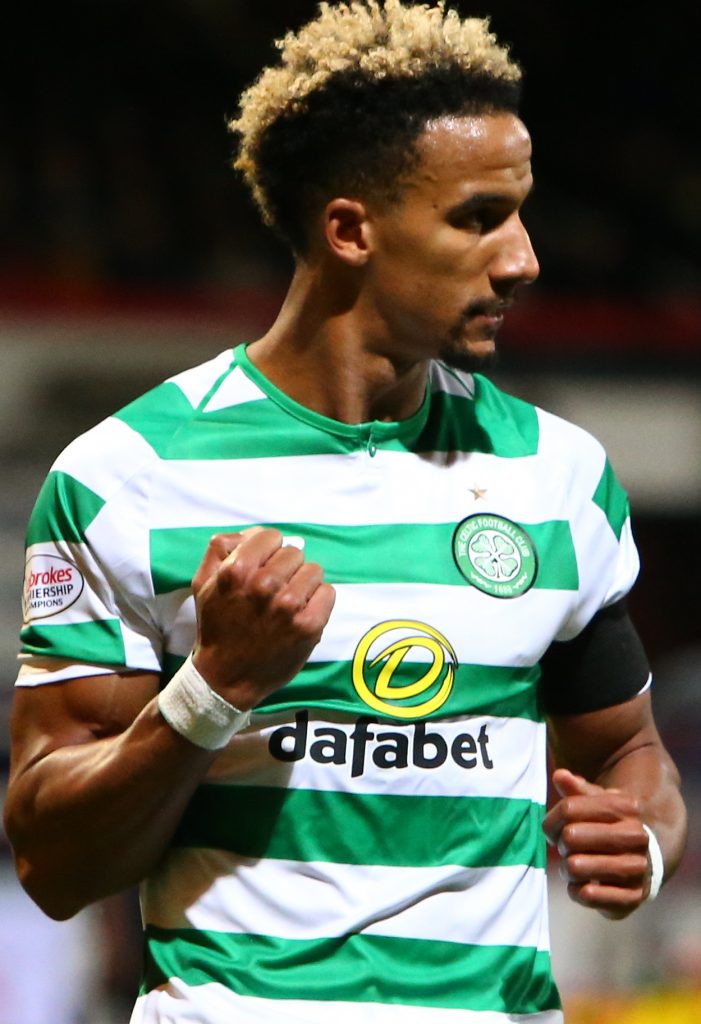 But it was all over following a devastating double salvo from the champions when Forrest fired in No.3 and Sinclair added a quickfire second.

Hayes was the architect of the third strike when he played a superb one-two with Christie, raced into space and rolled an inviting ball in front of the unmarked Forrest.

The winger didn’t hesitate as he walloped in a first-time effort and Clark was beaten as the ball sizzled between his legs.

And the giant shotstopper had that sinking feeling again only moments later when Burke, with outstanding positional sense, powered his way onto a knock-on from Forrest as he left Jason Kerr in his slipstream.

His diagonal run across the defence left him free on the right to deliver another ball across the face of the goal and Sinclair arrived at pace to tuck the ball away from close range.

Worryingly, Burke limped off in the 67th minute to be replaced by Timothy Weah as the Parkhead men continued to dominate.

In the 62nd minute, Christie was taken off with Odsonne Edouard coming on as Rodgers planned ahead for the Europa League tie against Valencia on Thursday in the east end of Glasgow. 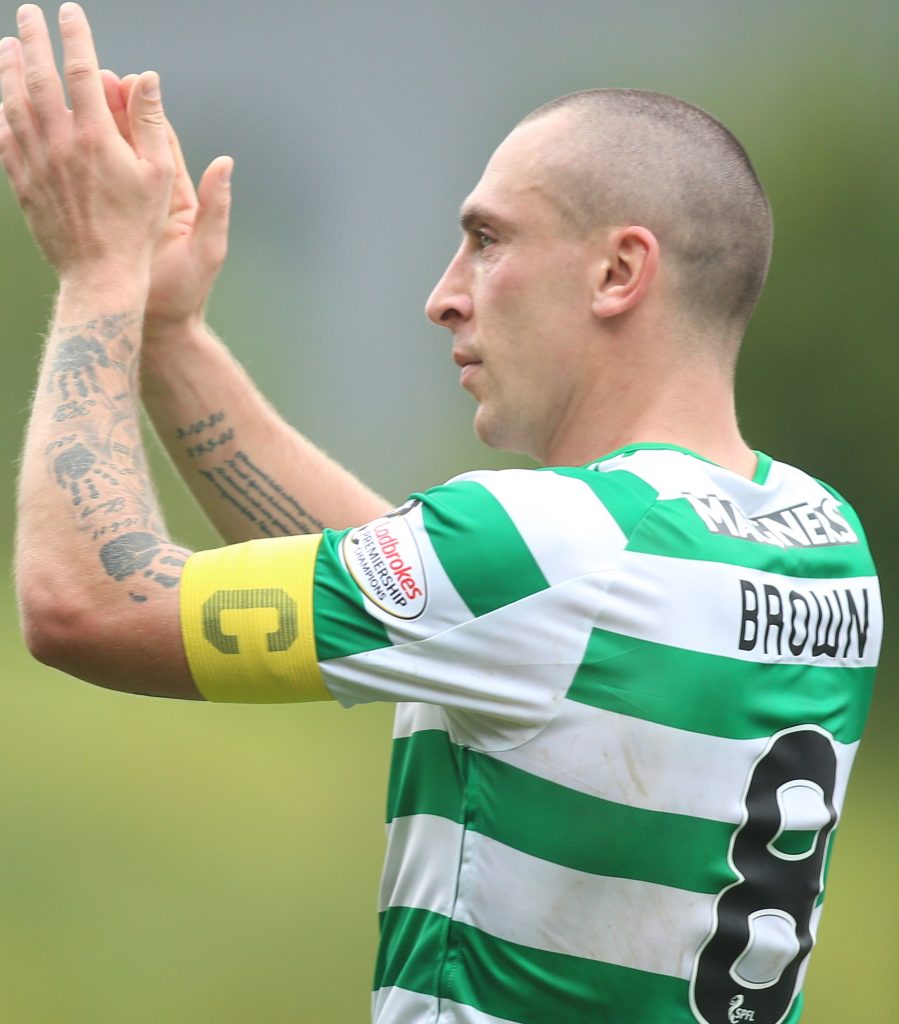 Weah thrashed two efforts at goal in quick succession as he tried desperately to get on the scoresheet. The first was blocked and the second ended up in Row Z.

Sinclair claimed a deserved hat-trick when he snapped onto a rebound from an Edouard shot. He chopped inside from left to right and swept an unstoppable close-range drive behind the valiant Clark.

In the end, it was a comprehensive, professional performance from Rodgers’ players. They kicked off on the front foot and they kept going until the final whistle.