Celtic Quick News on News Now
You are at:Home»Match Report»CELTIC 6 MOTHERWELL 0: CROWNING GLORY: POSTECOGLOU AND CO IN PARADISE
By CQN Magazine on 14th May 2022 Match Report

APPARENTLY, Ange Postecoglou went for a stroll across the Clyde after all the festivities came to a halt in Paradise this afternoon.

It was a carnival atmosphere in the east end of Glasgow as Celtic, 25 points adrift last season, stylishly sauntered to a six-goal victory over a bewildered Motherwell to lift their tenth Premiership title in 11 years.

Postecoglou did not possess a magic wand to enable a spectacular turnaround, but the determined, steely Greek-Australian affected a truly astounding change of the club’s fortunes to lead his revamped squad to the club’s 52nd crown in their glorious history.

It was an afternoon of victory, joy and no little emotion as two of Parkhead’s favourite sons, Tom Rogic and Nir Bitton, said goodbye.

Even the sun came out to smile on a special day. 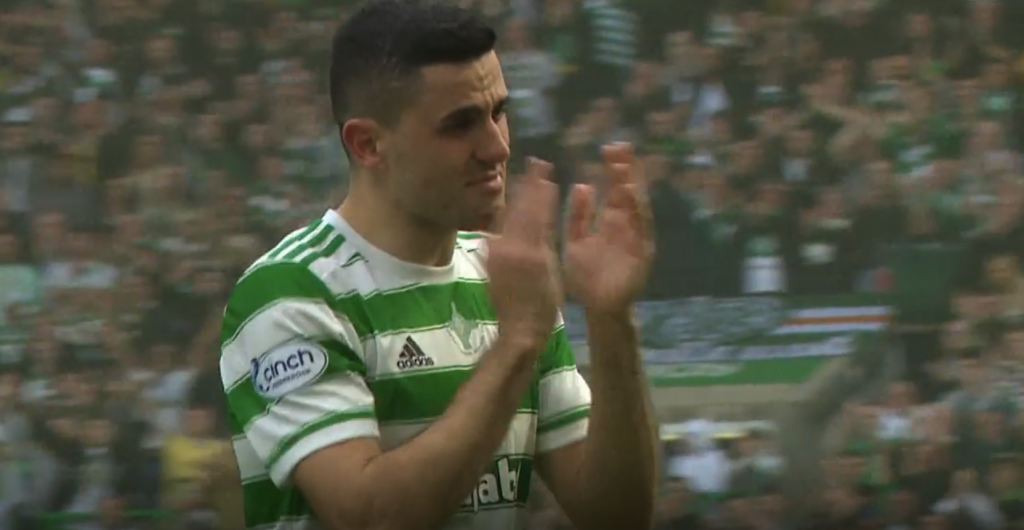 FAREWELL TO PARADISE…an emotional Tom Rogic applauds the fans as he says goodbye.

Celtic strutted to the finish line with a fair bit of panache as Kyogo Furushashi and Giorgos Giakoumakis both hit doubles and David Turnbull and Filipe Jota chipped in with the others.

The whirlwind hosts were three goals ahead at the interval after camping in the Well half for practically all of the opening 45 minutes.

It was a relentless procession towards the overworked Liam Kelly as the champions came at him from all angles.

The big mystery of the first-half was the fact it took Postecoglou’s side 21 minutes before they claimed the breakthrough goal.

Once again Kyogo demonstrated his lightning-swift reflexes and devastating accuracy in his final effort as he got the party started.

The Hoops won a corner-kick after a shot from Jota was diverted over the bar. The Portuguese flyer raced over to take the right-wing award and flighted a dangerous ball into the box.

The delivery created panic in the Well rearguard, a defender wildly miskicked an attempted clearance and that was all Kyogo required to sniff out danger.

He took a touch to drag the ball to his right and then turned superbly to fire a whiplash drive low past the startled Kelly at his right-hand post.

Oh, how the little Japanese striker enjoyed that strike as the packed stadium rose in unison in excited acclaim.

It was his 19th goal of the campaign and it made you wonder just how many he would have claimed if he had not missed 17 games of 2022 with a hamstring problem and five matches in the first half of the term, as well. 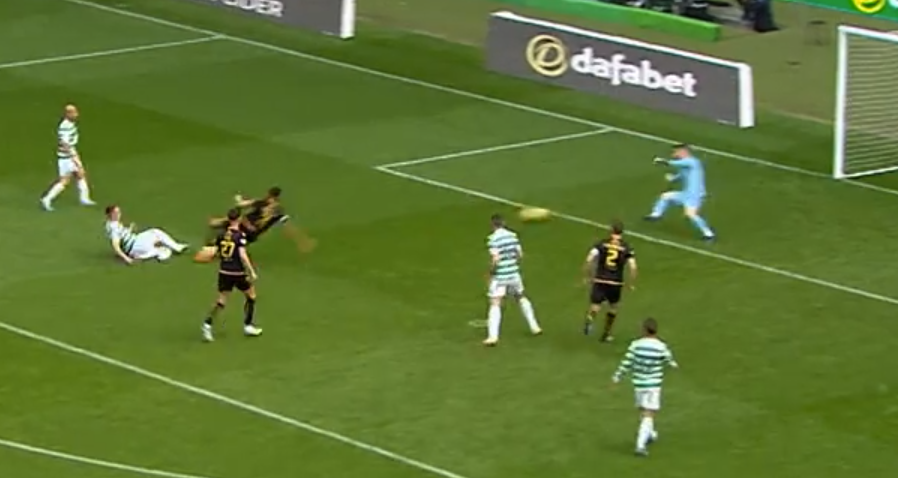 NUMBER TWO…David Turnbull smashes a right-foot drive into the net.

There had been an emotional moment in the 18th minute when the fans joined in wonderful acknowledgement of Rogic to honour the Wizard of Oz who was making his final appearance in his usual No.18 shirt.

In the 33rd minute, only the woodwork cruelly denied Rogic a final goal on his happy hunting ground following an impeccable piece of long-range distribution from Joe Hart released Jota on the left.

He galloped forward before slinging a low cross in from the left and his team-mate stretched every inch of his 6ft-plus frame to get to the ball. He got a touch to divert it away from Kelly, but, alas, Dame Fortune scowled in his direction and the effort smacked off the left-hand post and rebounded to safety.

A second goal duly arrived in the 40th minute when Kyogo and Maeda combined and Turnbull took over to drive at the danger zone. He neatly sidestepped the mesmerised Ricki Lamie before sizzling a low drive wide of the helpless Kelly.

Three minutes later, the keeper was invited to retrieve the ball from the back of his net for a third time and it was the result of an extraordinary sweeping move with Greg Taylor, Rogic, Turnbull and Cameron Carter-Vickers before Anthony Ralston lofted a pass in front of Kyogo. 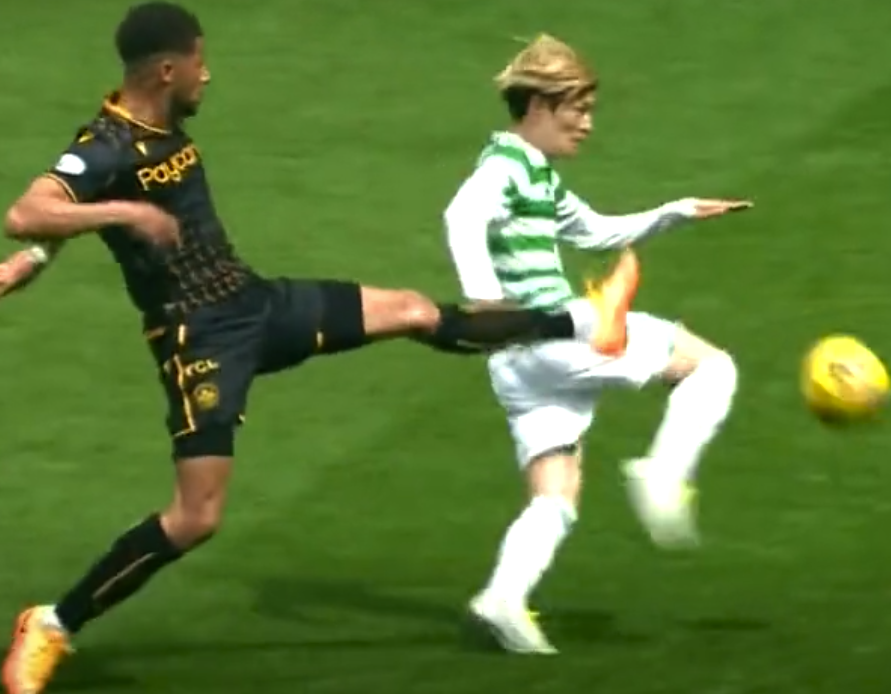 NUMBER THREE…Kyogo Furuhashi finishes off a sweeping move with an impeccable finish.

The speedster timed his run to perfection as he let the ball drop over his shoulder to hit it first time wide of Kelly. A brilliant goal from start to its exquisite finish.

Carl Starfelt came so close to his first goal of the season right at the start of the second-half with a close-range diving header from a Jota right-wing cross, but his attempt whistled wide of the upright. 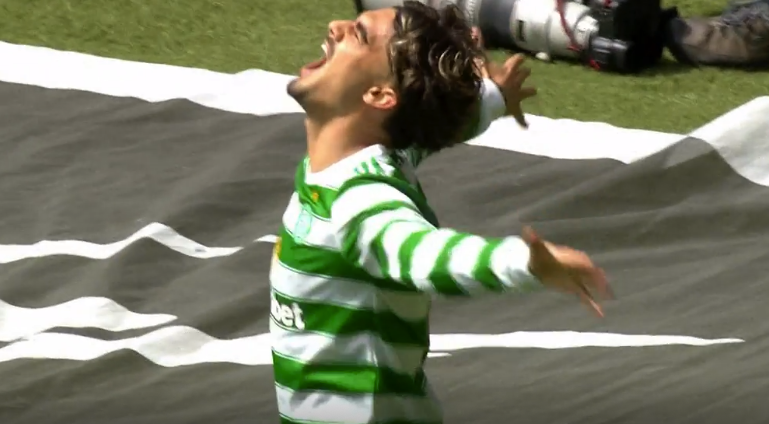 NUMBER FOUR…Filipe Jota celebrates his  16th goal of the campaign.

In the 59th minute, goal No.4 duly arrived when Kyogo and Maeda combined in some slick intechanging and the ball dropped in front of the rampaging Jota who didn’t hesitate before sweeping a left-foot drive low into the rigging.

Three minutes later, the Celtic supporters once again rose as one to applaud Rogic as the Aussie entertainer made way for the last time at Parkhead.

The big chap was clearly emotional as he left the premises along with Kyogo, Turnbull and Taylor as James McCarthy, Yosuke Ideguchi, Giakoumakis and Stephen Welsh took their place. 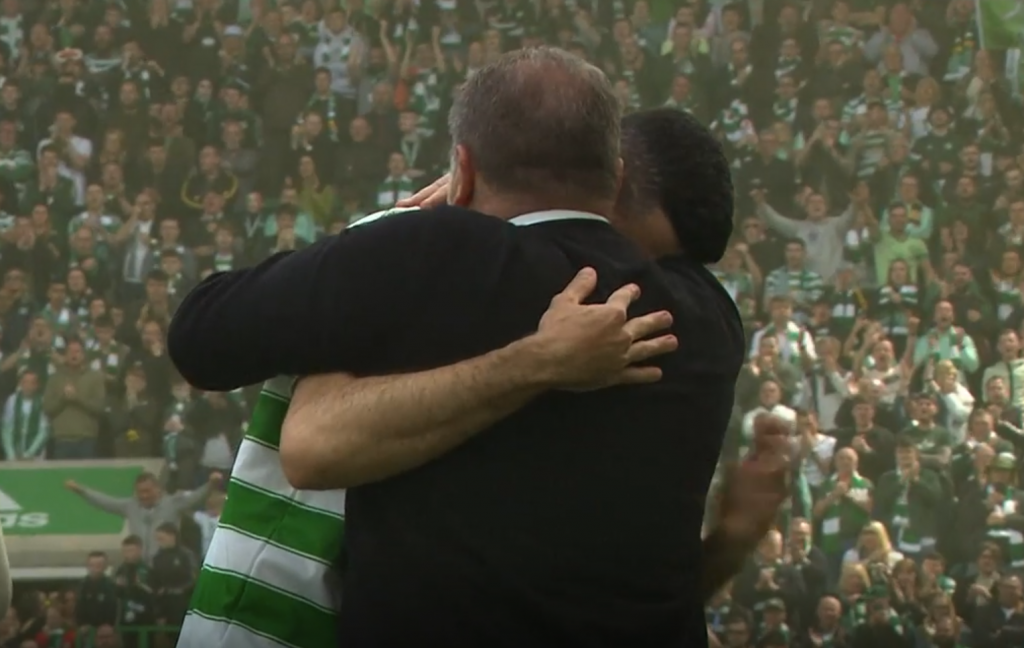 THAT’S MY BHOY…Ange Postecoglou and Tom Rogic in an emotional embrace.

Six minutes after that, the place was bouncing again when the Hoops collected their fifth goal and it was another opportunistic effort from the Greek powerhouse.

A cross from Jota was deflected into the air and, as the visitors’ defence stood transfixed, Giakoumakis reacted quicker than anyone else to catch the ball as it dropped to hit it over his shoulder past the static Kelly.

Five minutes from time, the crowd once again put their hands together in heartfelt thanks as Israeli ace Bitton made his final appearance when he replaced Callum McGregor.

As an extra special nice touch, the armband was handed to the versatile star who had spent over nine years at the club. 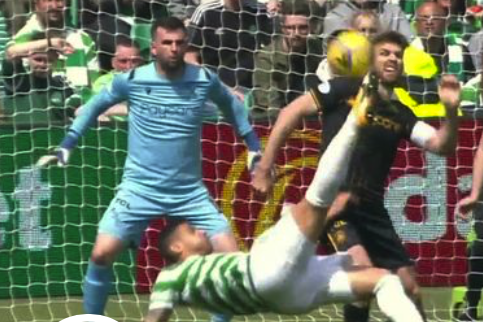 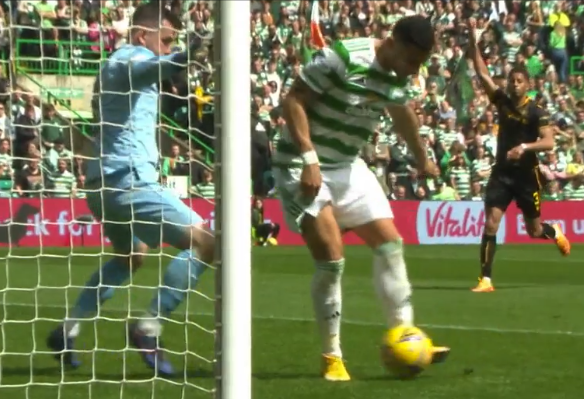 All the day required was a final goal to bring down the curtain and Giakoumakis, with his seventeenth of the season, duly obliged when Maeda nodded down a searing crossfield ball from Carter-Vickers into his path.

The frontman took a touch before stroking the ball into the inviting net.

It was the perfect end to a sublime day in the east end of Glasgow.

Thank you for the memories, Tom and Nir.

Thank you for joining us, Big Ange. Your Celtic adventure has got off to a helluva start!