TIMOTHY WEAH has admitted he does not know what the future will hold as he gets to within 10 games of his Celtic loan contract running down.

The exciting 19-year-old American international attacker is due to return to Paris Saint-Germain in June following his arrival at the champions at the turn of the year.

Weah has yet to start a game since Neil Lennon replaced Brendan Rodgers last month and has been used as an impact sub in the matches against Hearts, Aberdeen and Dundee after failing to get off the bench in the 2-0 victory over Hibs at Easter Road.

However, the pacy forward admitted he is relishing life at the champions just now.

The teenager, speaking to the Daily Record, admitted: “It’s going very well at Celtic. The players and the coach accepted me very quickly. The integration was easy, because I speak English although I continue to speak French with Odsonne Edouard, Dedryck Boyata and Olivier Ntcham.

“The people are really very nice. It’s easy for me there. I live incredible things through football right now.

“There is an amazing atmosphere at the stadium. In Paris, it’s similar, but there’s something different at Celtic Park, which is an old stadium. I have never seen this. The team are playing well.

“I’m happy to be there, it’s a very good choice. 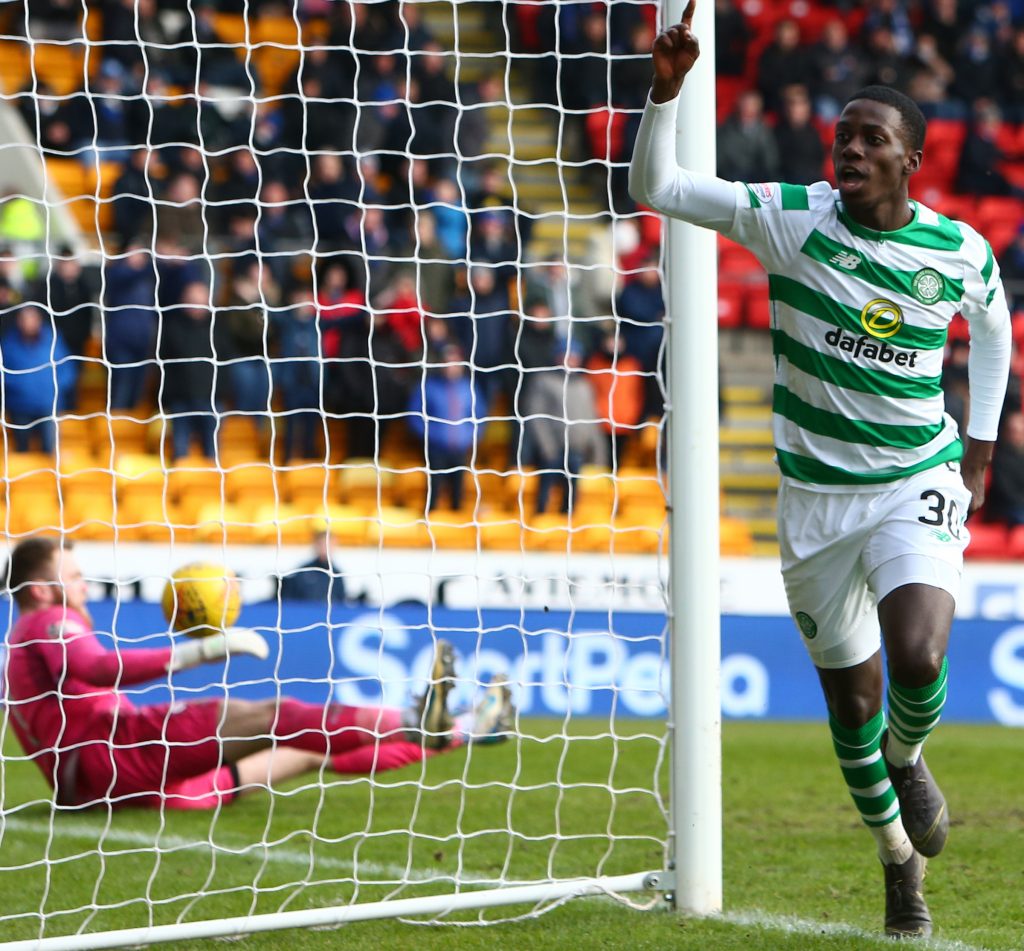 YANKS A LOT…Timothy Weah turns away in celebration after scoring against St Johnstone keeper Zander Clark.

“I don’t know what will happen after my loan. I’ll have to talk to them (PSG) about it.”

Weah added: “I was disappointed with the way the first half of the season went for me because I was not told anything after the summer – it was as if I had never played with the team.

“I was first sent with the reserve for two weeks, then I was told that I would improve more by training with the pros. I did not speak with the manager or anyone.

“I did not understand why I was not playing. At the beginning of the season, I played very well against Bayern Munich in a friendly and I scored in the Champions Trophy against Monaco. I felt good. And, suddenly, I was no longer there.

“My aim is still to play for PSG. At the moment that is difficult because I have Neymar, Kylian Mbappe and Edinson Cavani ahead of me in the team.

“But PSG did everything for me. I loved them and still do. It’s like that in football – there are some things you can’t control.”

Weah has made 12 appearances for the Hoops while starting only two – the 3-0 win over Hamilton Accies on January 26 and the 2-0 victory over Hibs the following month.

He has scored three goals and has already won over the Hoops fans with his wholehearted displays.