Celtic Quick News on News Now
You are at:Home»Latest News»CELTIC AND THE HUNT FOR A MANAGER: DAVIE HAY
By CQN Magazine on 9th June 2021 Latest News

Here is an extract from ‘The Quiet Assassin‘, the booked co-authored by Alex Gordon in which Davie Hay tells his own story of his return to the club.

I was thirty-five-years-old when I moved into the office that had once been occupied by the great Jock Stein, the man who had had such an influence on my career. I looked around the place, took a deep breath and then started to get on with the job. Obviously, I am not one to put myself under pressure, so I promised the Celtic fans at least one trophy in my first season or I would resign.

I revealed that to a couple of newspaper reporters and the following day there were massive headlines informing everyone, ‘Hay will quit if he flops!’ I hadn’t even been involved in a competitive match as Celtic boss and I was already under awesome strain. Actually, I believed by making that revelation that I would be taking some of the weight off the shoulders of the players. I would become the target, the focal point and they could get on with getting their game in order. 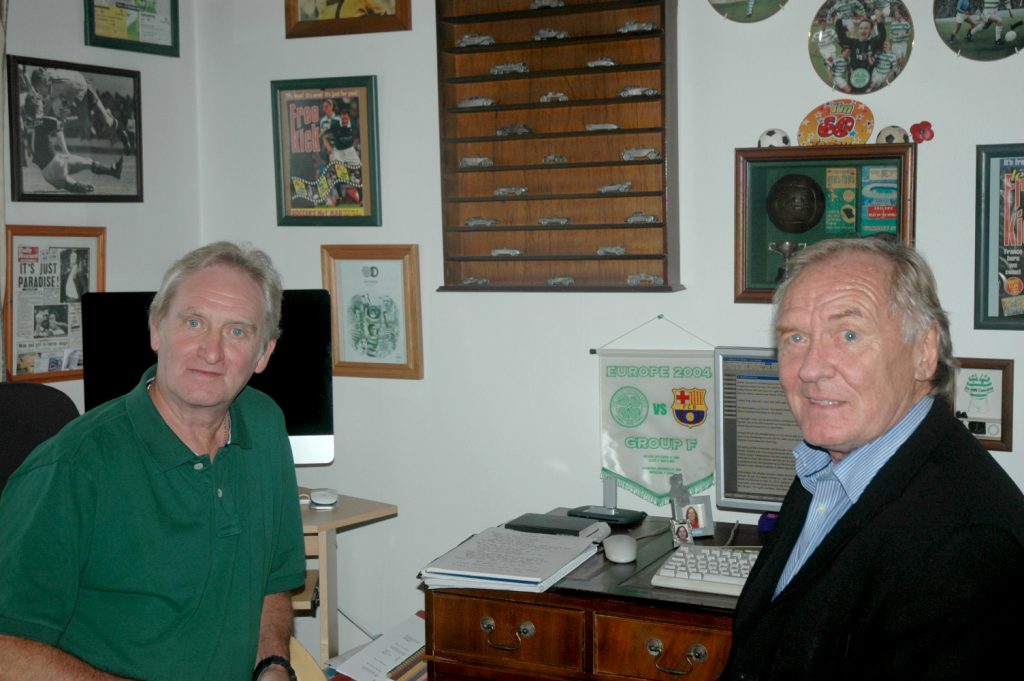 READ ALL ABOUT IT…Davie Hay is interviewed by Alex Gordon, co-author of his autobiography.

Everyone at Parkhead realised we were in for a long, hard season. There was a lot of work to be done. I knew, too, that the Celtic support would be expecting big things from their new manager. Billy McNeill was – and still is – a legend to those fans. He was going to be exceptionally difficult to replace. For his own reasons, Billy had decided to leave the club and pursue his managerial career in England with Manchester City and then Aston Villa.

But I was aware that he was still seen, quite rightly, as a ‘Celtic man’. On top of that, there was Europe to contend with and, naturally, expectation levels are always high on this front. Celtic had conquered Europe in 1967 and the supporters saw no reason why we couldn’t do that again. There was the ever-present threat from our old foes Rangers. And there was the menace from the two teams who had become known as ‘The New Firm’ – Aberdeen, bossed by Alex Ferguson, and Dundee United, managed by Jim McLean. I left Celtic nine years earlier when they were wiping the floor with the opposition on their way to nine successive championships. A lot had happened in those nine years and the fortunes of the club had slipped somewhat.

Celtic had won the League Cup, beating Rangers 2-1 in the Final with goals from Charlie Nicholas and Murdo MacLeod, in Billy’s last crusade, but Dundee United had lifted the title while Aberdeen had ended Celtic’s interest in the Scottish Cup at the semi-final stage. Europe didn’t last too long, either. The club had a memorable 4-3 aggregate triumph over mighty Ajax – winning 2-1 in Amsterdam – but they went out at the next stage to Spanish side Real Sociedad, losing 3-2 over the two legs.

I thought about signing a young lad who was making a bit of a name for himself at Partick Thistle, a certain Mo Johnston, but I knew I needed experience up front and I paid £100,000 to Coventry City for Jim Melrose, who had also first come to prominence at Firhill. We kicked off the league campaign against Hibs at Easter Road on 20 August. I looked around the dressing room before the game and I liked what I saw. I witnessed a lot of determination and belief in those players. Pat Bonner, Danny McGrain, my old mate from The Quality Street Gang, Roy Aitken, Murdo MacLeod, Davie Provan, Paul McStay and Tommy Burns were the backbone of the side; every one of them an international.

We went into the Edinburgh meeting confident of getting a victory and so it proved with goals from MacLeod and Melrose giving us a 2-0 triumph. The League Cup kicked off four days later with a decidedly dodgy tie up at Glebe Park against Brechin City. Things can go terribly wrong on these occasions, but another goal from Melrose gave us a winning start in that competition. In fact, we won all our opening games in the four tournaments – beating Berwick Rangers 4-0 in the Scottish Cup at Shielfield Park and Danish side Aarhus 1-0 in the UEFA Cup at our place. And we defeated Rangers 2-1 in my Old Firm managerial debut.