Celtic Quick News on News Now
You are at:Home»Latest News»‘CELTIC ARE IN PHENOMENAL SHAPE’
By CQN Magazine on 31st July 2018 Latest News

SCOTT BROWN has warned rivals: “We are in phenomenal shape.”

The Celtic skipper reckons the seven-in-a-row champions are fit and raring to go as they prepare for the launch of the Premiership campaign against Livingston at Parkhead on Saturday.

Brown insists Brendan Rodgers’ players are in peak condition as they pursue a remarkable treble treble after unprecedented domestic success under the guidance of the Irishman.

He said: “To be perfectly honest, the squad is phenomenal just now.

“I think in terms of fitness levels, it’s right up there. Quality-wise it’s got to be up there, as well.

“We’ve got Ryan Christie and Scott Allan who have come back. We have Michael Johnson coming through and Calvin Miller who’s pushing on, as well.

“I’m sure everyone will get the chance with the games we have coming up. 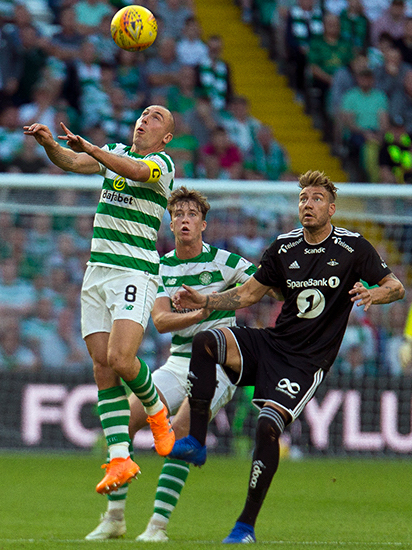 UP AND AT ‘EM…Scott Brown gets up above Niklas Bendtner in last week’s 3-1 win over Rosenborg. Jack Hendry looks on.

“We’ve had a great pre-season, we need to make sure we kick on now in the Champions League qualifiers and in the league.

“The squad is probably about as fit and strong as it’s been in a long time.

“Lewis Morgan has come in and he’s had a wee niggle, but he’s looked strong, too, so it will be good to see him in full flow.”

Looking at the European campaign, Brown is confident the Hoops won’t falter against Rosenborg in Trondheim in the Champions League second leg qualifier tomorrow night after gaining a 3-1 advantage last week.

He said: “The football we played in the second-half was outstanding. We managed to keep them back in their half and keep the shots on Craig’s goal to a bare minimum.

“The way the lads played was exceptional, but going over there is totally different circumstances.

“They know they have to come out and score two goals, so here’s hoping we can open them up.”