Celtic Quick News on News Now
You are at:Home»Latest News»CELTIC ARE SLEEPY HEADS – THANKS TO BOSS RODGERS
By CQN Magazine on 1st December 2018 Latest News

BRENDAN RODGERS is clearly not an advocate of the old adage: “Snooze and you lose”.

The Celtic boss actively encouraged his players to enjoy some extra shut-eye following the 1-0 Europa League Group B triumph over Rosenborg in Trondheim on Thursday night.

Rodgers had to devise a plan to prepare the Hoops for tomorrow’s Betfred League Cup Final against Aberdeen at Hampden – a mere SIXTY-SEVEN hours after the exertions at the Lerkendal Stadium against the Norwegian champions.

The Irishman was determined to avoid a tired set of pros at Lennoxtown in the rundown to the silverware shoot-out against the Pittodrie outfit, so he changed the normal routine – and ordered extra snooze time in Scandinavia.

The Hoops gaffer insisted: “One of the key things is sleep when you are recovering.

“If we’d gone back on Thursday night it would have been the early hours of Friday morning and the players would then have had to travel back to their homes. They might not have got back until about 3am.

“Then that means you get them in that little bit later on the Friday and there is a tiredness to the day and the work.

“It’s not quite the same, but this way we have been able to travel home nice and relaxed. 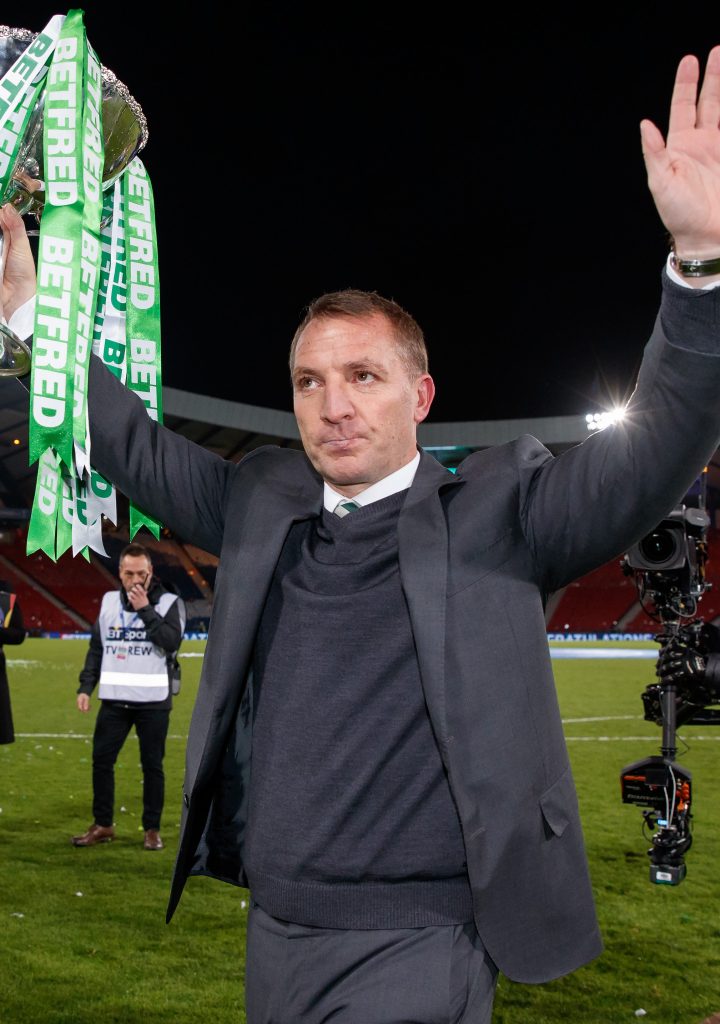 RODGERS THE FIRST…the Celtic boss with his debut piece of silverware following the 3-0 Betfred League Cup Final win over Aberdeen at Hampden in November 2016. Pic: Geo.

“The players got a nice meal on Thursday night, had a lie-in on Friday morning and met to do some work in the pool or in the gym.

“That’s normal. We did it after we played in Israel in my first season when we stayed overnight in Beer Sheva.

“You are looking from a number of weeks back at the preparation and it’s all about the players.

“Some staff and people might have wanted to get back earlier, but the game is about footballers and you have to look after them.

“You make sure they are recovered to get ready for a big game. The recovery team are great at looking after them and we’ll have a meeting as staff to tidy up our final preparations for the Final.”

The Parkhead chief will be looking for a hat-trick of successes over the Dons in the Btefred trophy at the national stadium tomorrow afternoon.

Rodgers won his first trophy as Hoops gaffer in November 2016 when goals from Tom Rogic, James Forrest and Moussa Dembele (pen) gave them a 3-0 triumph in the same competition.

And the manager was celebrating again in May the following year as he joined the legendary Jock Stein, 1966/67 and 1968/69, and Martin O’Neill, 2000/01, as the only team bosses to complete a silverware clean sweep – an achievement he duplicated last season.

In a dramatic Scottish Cup Final in 2017, Rodgers saw his side fight back from the loss of an early goal from Jonny Hayes to level through Stuart Armstrong and then claim the silverware with a stoppage-time winner from Aussie international star Rogic.