ANGE POSTECOGLOU refused to get involved in the controversy over Celtic’s winning goal against Aberdeen at Pittodrie last night.

The Dons, 2-0 adrift at the interval, had fought back to 2-2 after being presented with two sloppy goals by the visiting defence following set-plays.

However, within a minute, the Hoops had scored a third through Filipe Jota who had also opened the scoring in the first-half.

Stephen Glass, the home gaffer, was fuming the effort was not ruled out, but Postecoglou, speaking to the Daily Record, simply responded: “There’s nothing more I can say, it was given a goal. 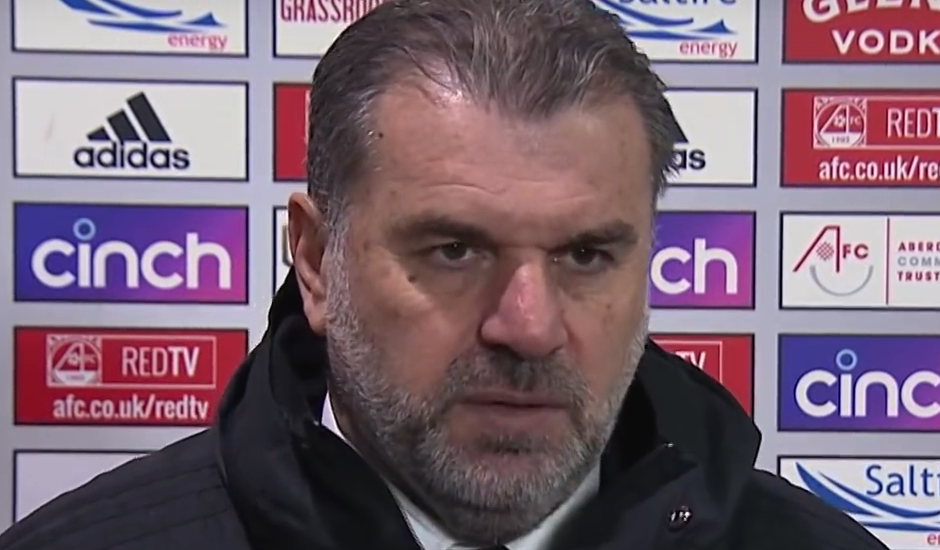 “I don’t have a view of it, I don’t know anyone who does apart from the linesman who made the decision.

“So. from my perspective, it was more important to see our reaction to going level.

“We got back out in front and scored the goal.”

The Dons boss was angry the third goal was allowed to stand, but his complaint was not with the scorer, Jota, but with Liel Abada.

The claim was the Israel winger was in an offside position and interfering with play. If Glass gets the opportunity to watch a replay of the incident he may have a rethink.

As our images show, Abada may well have been in a marginally offside position, but the accusation he was participating with play when Anthony Ralston headed the ball into the box is way off target. 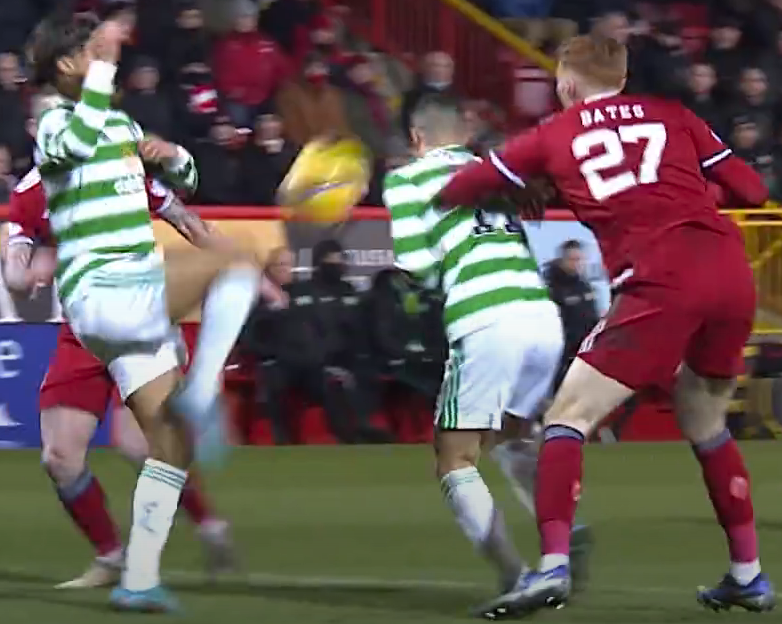 GETTING THE ELBOW…Liel Abada is on the receiving end from Dons defender David Bates as the ball drops for Filipe Jota. 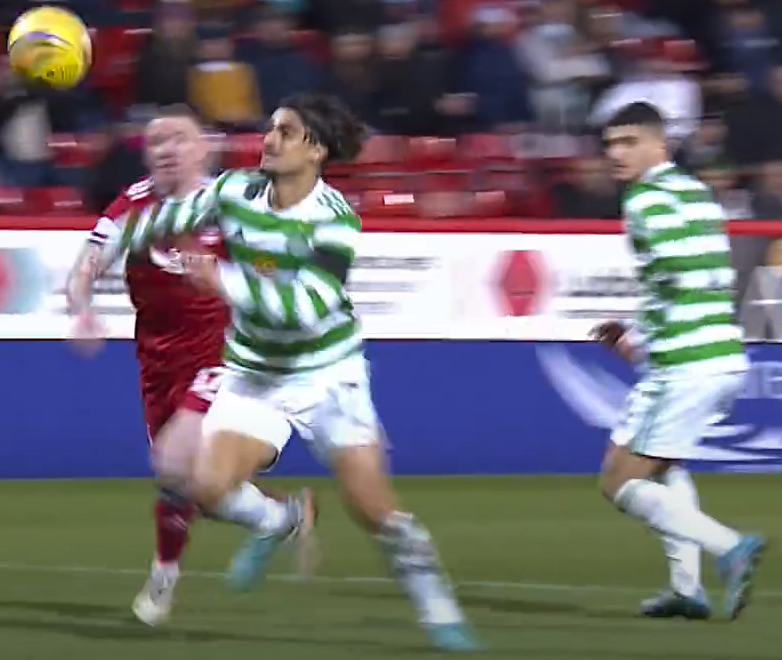 ON THE RUN…Filipe Jota races away from Jonny Hayes as Liel Abada looks on.

There is no intentional contact with centre-back David Bates as the ball drops to Jota, but unless the little winger has the ability to dematerialise, there was little he could do to prevent the Dons player running into him.

At no time did he attempt to block his opponent, as was wrongly suggested by one so-called media pundit.

Time and time again, we have seen players obstructed by opponents when they are trying to race past them – Abada and Jota experience this in just about every match – and play is allowed to go on for the simple fact the match official views it as an unavoidable coming-together.

Abada did NOT stand in the way of Bates, he didn’t make a move either way.

That’s the way referee Willie Collum and his assistant saw the incident and the goal was good.

No doubt, though, there will be more grumbling about the strike for weeks to come.

In the meantime, Celtic boss Postecoglou and his players will concentrate on winning football matches. 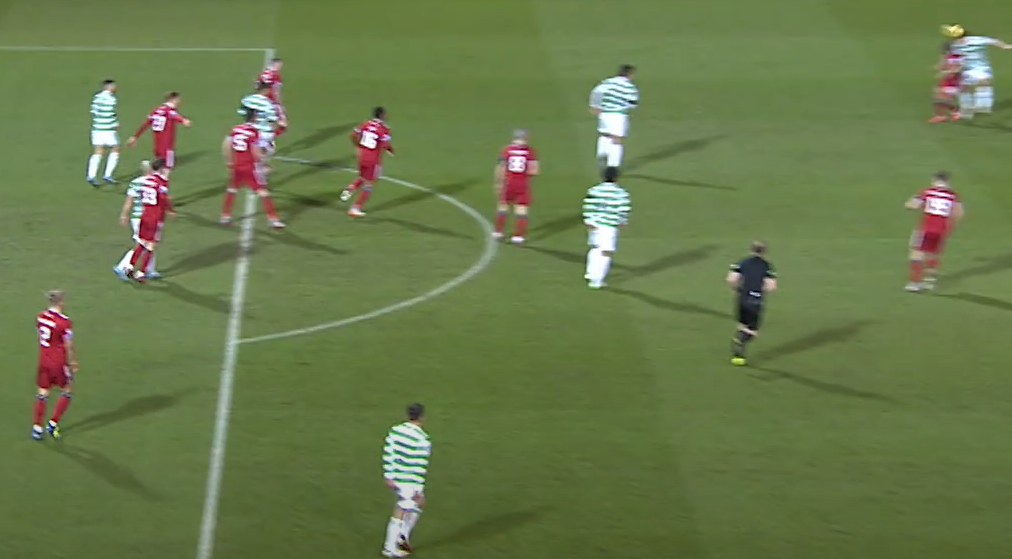 HEADS I WIN…Anthony Ralston (extreme right) nods the ball back into the Dons penalty area with Liel Abada deemed to be marginally offside although there’s clearly not much in it when you take Ross McCrorie’s position into consideration. 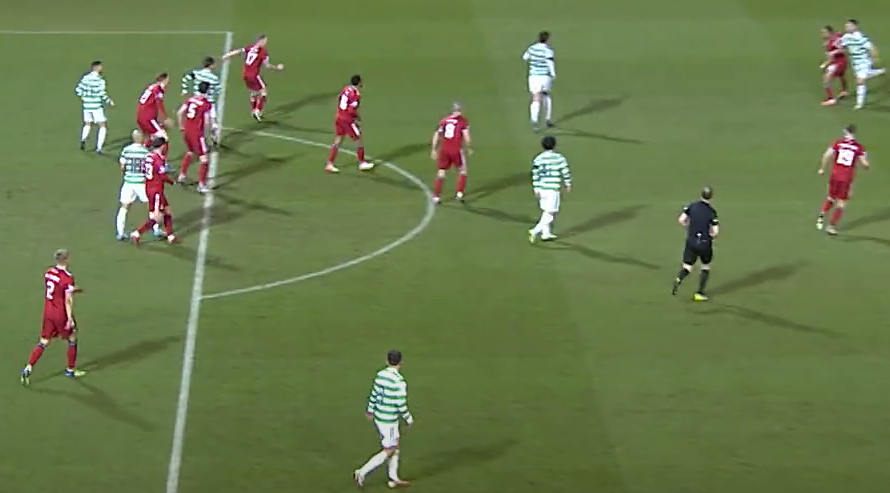 ON THE MOVE…Filipe Jota prepares to take off from his position on the 18-yard line and is clearly onside.

TAKING AIM…Filipe Jota prepares to fire at the Dons goal while David Bates (extreme right) appeals for something.

ON ITS WAY…the ball heads for its destination with keeper Gary Woods grounded.