KRISTOFFER AJER will be a wanted man in the summer – and interim boss John Kennedy admits Celtic will face a struggle holding onto the versatile Norwegian international.

The 22-year-old defender turned in a Man-of-the-Match performance in the 1-0 win over Aberdeen at Parkhead yesterday.

Ajer has already been linked with a reunion with ex-Hoops boss Brendan Rodgers at Leicester City while AC Milan, who thumped Neil Lennon’s side home and away in the Europa League Group H this season, have been tracking the player since summer.

Borussia Dortmund are also in the hunt and could follow the example of Bayer Leverkusen in raiding the Parkhead club after Jeremie Frimpong’s £11.5million move to the Bundesliga outfit last month. Atletico Madrid have also been credited with an interest.

Ajer, who was signed by his countryman Ronny Deila for a bargain £650,000 from FK Start in 2015, has one year left on his Celtic contract and, like striker Odsonne Edouard, is bound to attract interest at the end of a thoroughly disappointing campaign.

Stand-in boss Kennedy, who will be in charge for the next seven league games, said: “Kris isn’t overly-thinking about his future. For him, it’s just about giving his best wherever he is.

“But I’ve no doubt that there will be interest in him. He’s still very young and he’s an international player.

“With his profile of speed, size, technique and ability – there’s going to be interest in him. 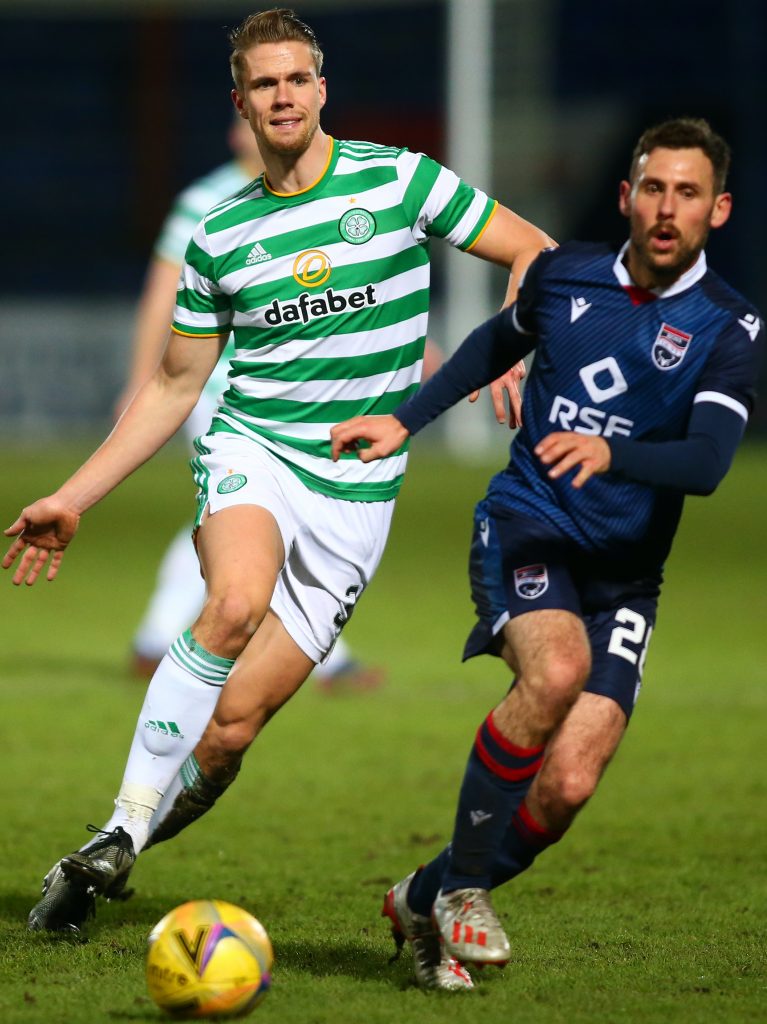 ACTION MAN…Kristoffer Ajer on the run against Ross County.

“When that comes, it’ll be the club and Kris himself making that decision. It’s important for the club going forward to keep players like him.

“But it’s a two-way thing of the player having that commitment contractually, as well. We’ve got boys here such as Scott Brown and Callum McGregor who know the club inside out, enjoy being here and have an affiliation with Celtic.

“They’re happy here and content, they want to maximise the time they have.

“But other players as we’ve seen in the past, come in, do well for the club – but if it makes sense for the club from a business perspective and the player sees his future elsewhere, naturally things change.

“But that’s not just at Celtic, that’s at every club.”

Reflecting on the second single-goal victory over the Dons in 10 days, Kennedy, speaking to the Sunday Mail, added: “Kris was terrific, especially in the second-half when Aberdeen put us under pressure.

“I’ve known him since he came in here as a kid on trial. He’s a great character and a leader, in terms of how he works and conducts himself.

“That was a big performance from him against Aberdeen. Even when he was tired at the end, he was throwing himself in front of things or getting his head on balls.

“We know he’s a good footballer, but we’ve always tried to work on his aggression in the box.

“That didn’t come naturally to him because as a kid he was a number 10 in midfield.

“But he’s got it in his game now and that performance will give him confidence.”