CELTIC chief executive Peter Lawwell has urged for “strength in adversity” as the champions face a testing period in a challenging campaign.

There has been increased criticism of the team after a run of only two wins from 10 games with the side shipping a disastrous 23 goals over the same dreadful sequence.

However, the Hoops are within touching distance of an unprecedented feat at Hampden this month as well as a phenomenal tenth successive title.

They trail Steven Gerrard’s Ibrox outfit by 11 points, but have two games in hand and the Premiership season has a long way to go.

In a statement, Parkhead chief Lawwell said: “Like all those with Celtic’s best interests at heart, everyone at the Club is feeling the same hurt, disappointment and frustration following the team’s recent results.

“We are accustomed to winning and, of course, our objective will always be for that to continue. There is no complacency whatsoever.

“Neil, the players and backroom staff, who have already done so much for the Club, share in all of that. They have never been more determined to succeed. Having enjoyed such sustained, unprecedented success, we now need strength in adversity.

“We know that many Celtic supporters share very honest and real concerns and they are being heard by the Club.

“Every decision taken, both on and off the park, is with the Club’s best interests at heart. This is not about any individual, but about Celtic Football Club as a collective. 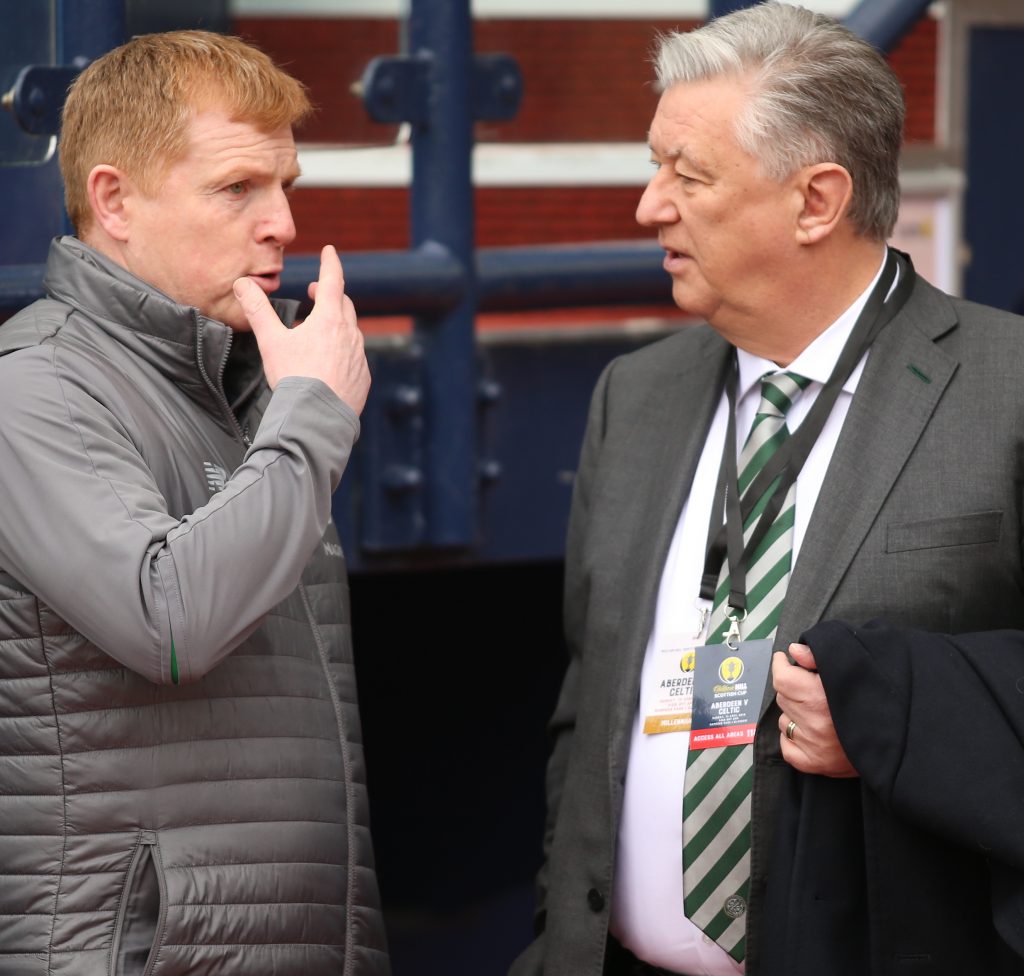 IT’S GOOD TO TALK…Peter Lawwell and Neil Lennon chat before a game.

“Together we have faced unique difficulties in the early part of the season. While some of these were beyond our control, of course we recognise we must improve.

“There is a long way to go and everyone at the Club is ready for the challenge.

“Later this month, Celtic will attempt what no other club in the world has achieved – a quadruple treble in domestic competitions.

“We can best prepare for that and for our other remaining competitions this season by moving forward together, with the sole aim of achieving continued success for the Club.”

Celtic are due to play AC Milan in the now-redundant Europa League encounter at the San Siro on Thursday evening before taking on St Johnstone at Parkhead on Sunday afternoon.

Lille are the visitors to Glasgow a week on Thursday for the final European tie and then the champions meet Kilmarnock in Glasgow the following Sunday.

Then the Hoops can seal the phenomenal quadruple treble when they play Hearts in the delayed Scottish Cup Final at Hampden on December 20.

Victory will bring the club their TWELFTH successive domestic honour – a world record.