CELTIC have been fined £10,000 after fans let off flares in the 2-0 win over Cluj in the Europa League Group E game at Parkhead earlier this month.

The Hoops have been charged 17 times by UEFA in the last 12 years, with supporters consistently violating the governing body’s rules.

A statement has been released by the club calling on followers to put a halt to any misbehaviour at the stadium which could lead to further sanctions. 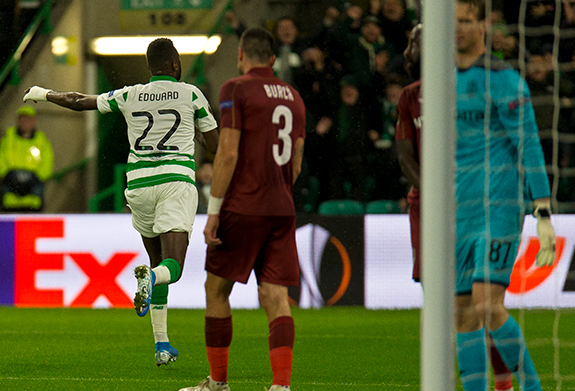 GOAL…Odsonne Edouard races away to receive the fans’ acclaim after the first goal against Cluj.

It read: “Following the latest UEFA charge against the club for the use of fireworks at Celtic Park, it is with real disappointment and frustration that the club needs to appeal again for this behaviour to stop.

“UEFA’s stance on the issue of pyrotechnics is unequivocal and very well-known.

“The club has been sanctioned on numerous occasions and yet, very disappointingly, this behaviour by a small minority persists.

“The serious safety concerns associated with such behaviour are obvious, as is the reputational damage which this behaviour and these charges have on the club. In addition, the numerous financial penalties placed on Celtic continue to come out the pockets of supporters who invest in the club.

“Celtic will be introducing further measures in order to deal with this behaviour. It has to stop.

“The club does not want it, our supporters do not want it and UEFA will continue to punish the club whenever it occurs as it is a clear breach of their regulations. It really is as simple as that. 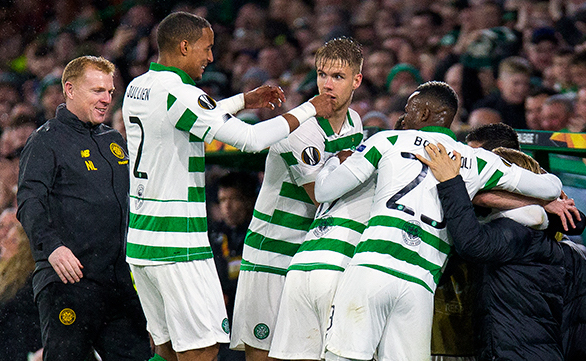 GOAL…Mohamed Elyounoussi is engulfed by team-mates with Neil Lennon looking on following his first strike for the Hoops.

“Given the number of repeated offences, we should also be very aware that there could be further, very serious repercussions which could have hugely detrimental consequences for the club and our supporters. It is hugely unfair that the enjoyment of Celtic matches could potentially be affected by the negative behaviour of a tiny minority.”

As for the actual football on the evening, it was one of the team’s best performances of the season as they overcame their Champions League conquerors by two clear goals with Odsonne Edouard heading in the opener in the first-half and on-loan Mohamed Elyounoussi claiming his first for the club after the interval with a deflected shot.

The eight-in-a-row champions now welcome Serie A outfit Lazio to Parkhead on Thursday night for their third Europa League tie.

Neil Lennon’s men sit on top of the section with four points after their earlier 1-1 draw with Rennes in France to go with their victory over their Romanian opponents.