CROCKED on-loan Celtic defender Jack Hendry has been ruled out for THREE months, at least, after undergoing knee surgery in Australia, as CQN reported.

The Scotland international sustained a knee injury in only his second game for A League outfit Melbourne City when he twisted it awkwardly while making a challenge as his side lost 3-1 to Adelaide City.

The unfortunate incident happened in the fading moments of the match and Hendry remained on the pitch until full-time.

Emergency scans revealed he suffered a torn medial collateral ligament and the 24-year-old right-back or centre-half underwent surgery yesterday in an effort to rectify the damage.

However, the Aussie club believe Hendry could return before the end of their domestic season, which concludes in May.

A club statement said: “Scans on Monday revealed the Celtic loanee had fully ruptured the ligament. 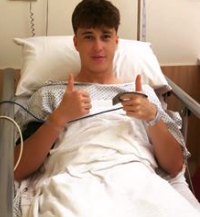 THUMBS UP…Jack Hendry puts on a brave face after surgery.

“The defender went under the knife on Tuesday as he looks to complete his recovery in Melbourne and make a return in the latter stages of the season.”

It comes after Hendry shared an injury update on Instagram.

He said: “It’s been a very difficult few days for myself. Was absolutely gutted to injure my knee on Saturday night.

“Happy to say I’ve had my op and, hopefully, all is well and now on the road to recovery, can’t speak more highly of Melbourne City staff and players and the support they have given me and, hopefully, can be back on the pitch ASAP.

“Thanks to everyone that has messaged, means a lot and I appreciate it!”

The unfortunate Hendry was allowed to go to the Aussies for much-needed game-time after featuring for a mere 11 minutes in Neil Lennon’s first team in this campaign, the 5-0 Betfred League Cup win over Partick Thistle at Parkhead in September.