THREE in a row! Celtic’s reponse to the Tynecastle shocker has been superb with three successive victories against Partick Thistle, Aberdeen and now Dundee at Dens Park this afternoon.

Seven goals scored and none conceded and a game coming up against Sevco Rangers at Parkhead to bring down the curtain on 2017.

However, the Hoops managed to serve up a bit of a Boxing Day mystery on Tayside. How it remained at 2-0 is a genuine puzzler. 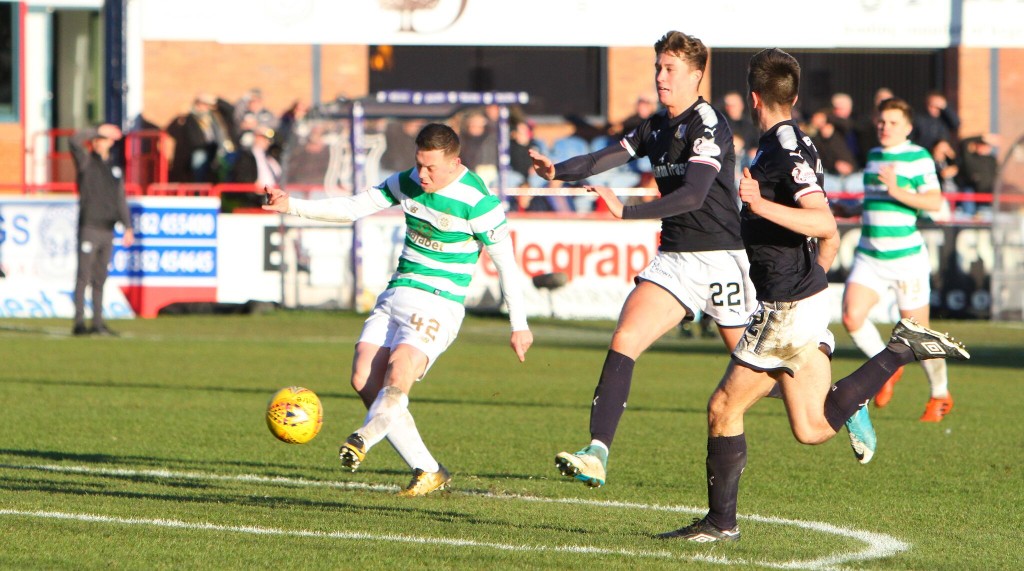 The Parkhead men were in cruise control straight from the kick-off, but just couldn’t convert their obvious superiority into goals.

The first-half was delayed for seven minutes following a dreadful accident between Jonny Hayes and defender Josh Meekings.

The Celtic winger, who celebrated his first Hoops goal against Aberdeen a few days ago, had to be carried off on a stretcher with what looked like a serious injury.

The incident was the low point on a first 45 minutes completely dominated by the champions who claimed two goals, but could have had at least another three.

James Forrest, who looked in the mood against the Tayside outfit, got the opener in only eight minutes, moments after Callum McGregor had hit the upright from close range.

Kristoffer Ajer, composed and confident as he brought the ball out of defence, was instrumental in the build-up play and picked out Hayes who sent Kieran Tierney clear on the left.

The defender’s cross into the box found Forrest who fired past Elliot Parrish for his 50th goal for the Parkhead men. 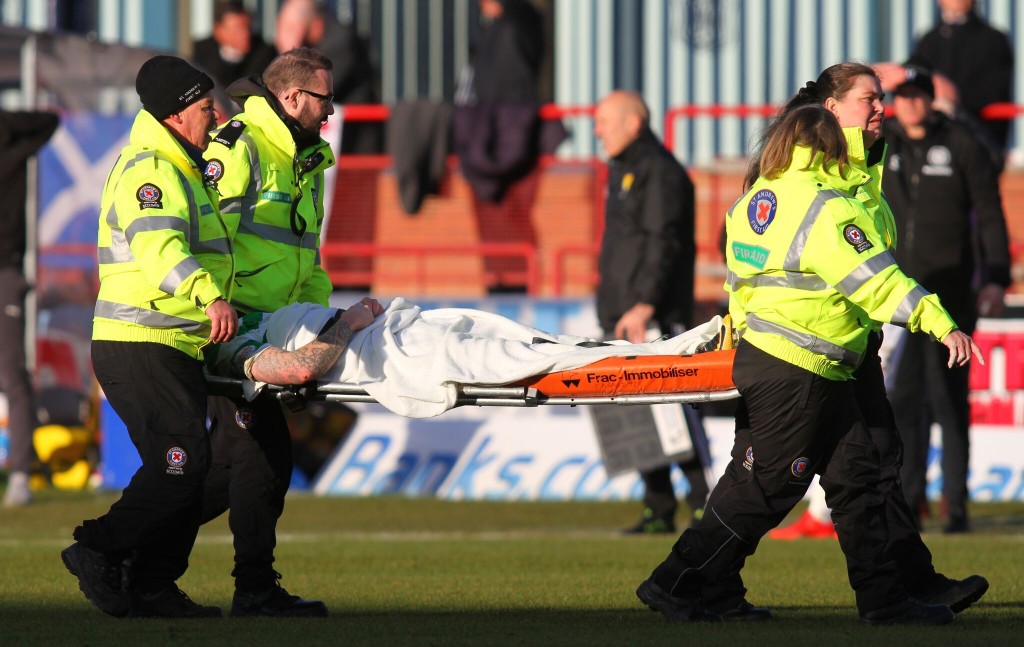 Michael Johnston, who replaced Hayes on the wing, combined with Tierney before Olivier Ntcham whipped a low drive just wide of the post with the keeper helpless in the 33rd minute.

Six minutes later, an inviting cross from Tierney was booted clear as Leigh Griffiths looked ready to pounce at the far post.

In the 40th minute, ex-Celtic defender Darren O’Dea, on for Meekings, was horribly short with a passback to his keeper.

Griffiths swooped onto the wayward pass and should have scored, but allowed Parrish to recover and save at his near post.

However, he had better luck in the 43rd minute after being released by Ntcham, who looks a certainty to start against the Ibrox side after this display before he was replaced by Stuart Armstrong. 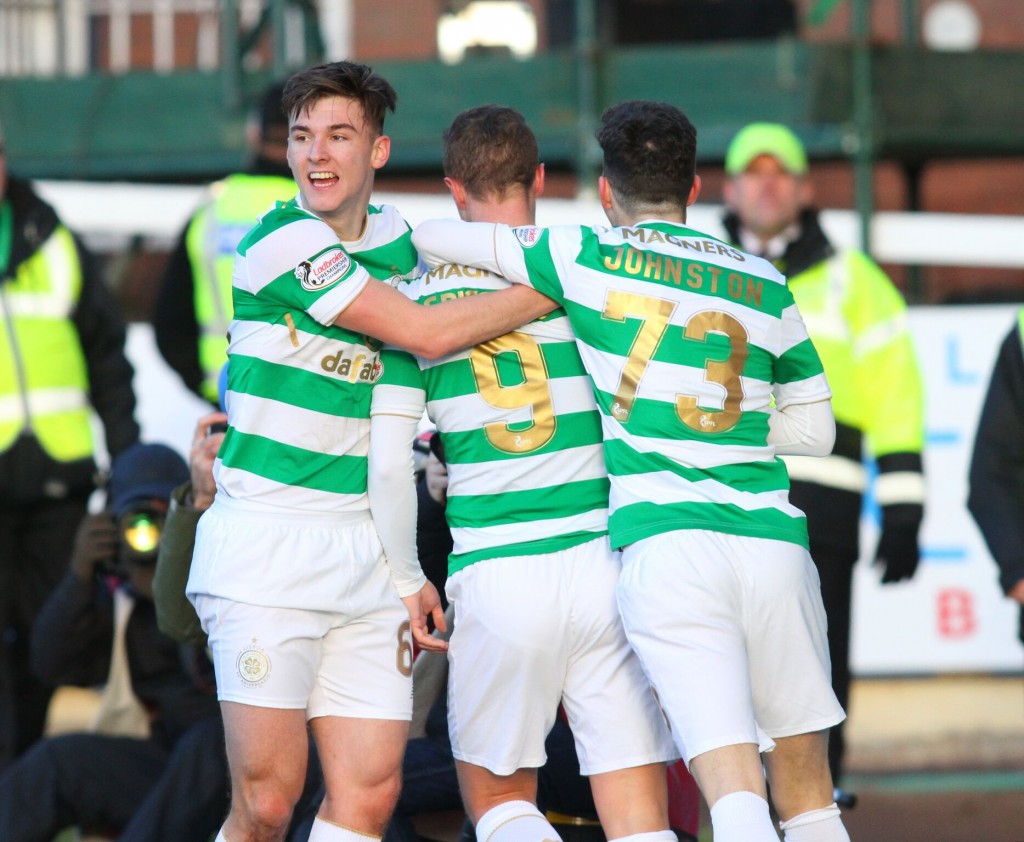 The striker took the slide rule pass in his stride before thumping a low drive beyond the helpless Parrish from 12 yards.

Just on the interval Johnston had an effort pushed to safety by the overworked home keeper.

Normal service was resumed after the break with McGregor breaking away from Jack Hendry, but his 20-yard shot was high and not so handsome.

Eleven minutes later, Griffiths had a shot that was deflected wide, but there was a scare in the 69th minute when McGregor was sloppy with a clearance and ex-Celt Paul McGowan thrashed an effort just over
the bar with Craig Gordon struggling.

That activated Celtic, but there was to be no more goals. Forrest dragged one wide after a wonderful solo run, Johnston put one over the bar when he should have hit the target and Parrish pulled off a couple
of saves. 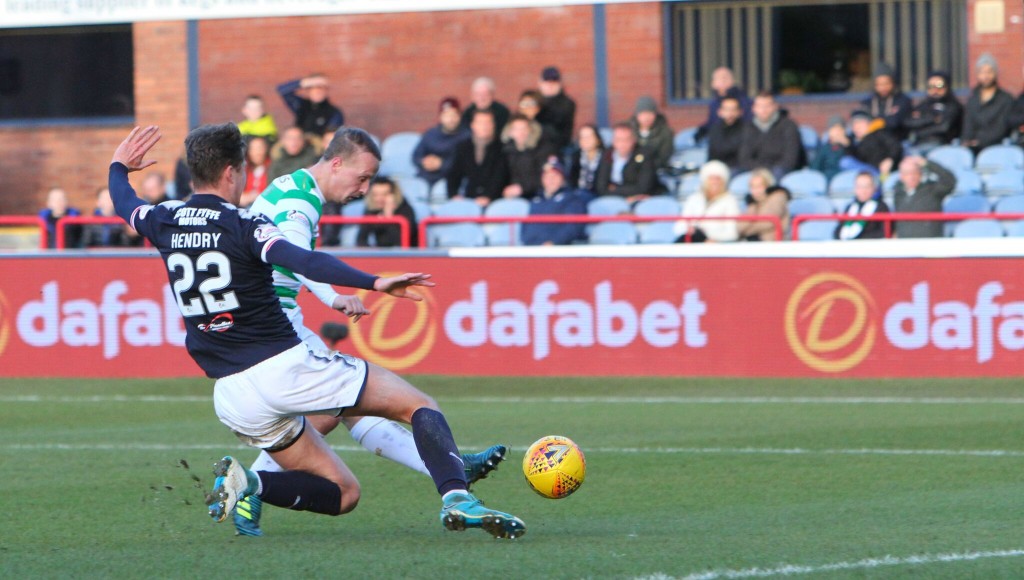 Moussa Dembele came on as a late second-hlaf sub for Griffiths and will be interesting to see who gets the nod to play at Parkhead at the weekend.

Either way, some shooting practice might be the order of the day for the firing squad after this afternoon’s parade of misses.

A quick word, too, about skipper Scott Brown. The midfielder was flawless as he bossed the game and made sure another three points would be on their way to the east end of Glasgow.