CELTIC have repeated they are “disappointed and frustrated” as Hatem Abd Elhamed became the THIRD player to test positive for coronavirus while on international duty.

The versatile defender joined his Israel international team-mate Nir Bitton in calling off from Saturday’s first derby encounter of the campaign against Steven Gerrard’s Ibrox side at Parkhead.

Elhamed admitted he felt unwell during the 2-1 loss to the Czech Republic in Hafia on Sunday and he, too, was sidelined following a swab.

Odsonne Edouard also contracted the virus while on international duty with the France Under-21 squad, but is expected back in Glasgow no later than Friday after self-isolating in Paris. He still has an outside chance of facing the Govan outfit in the 12.30pm kick-off 24 hours later. 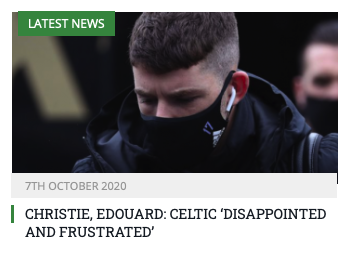 Ryan Christie is also in quarantine after being deemed to have been in contact with Scotland colleague Stuart Armstrong before the match against the Israelis.

A statement from the champions said: “Celtic can confirm that Hatem Elhamed has tested positive for Covid-19 on international duty and is now required to enter a 13-day period of isolation in line with regulations in Israel.

“Our medical staff will maintain constant dialogue with him and will provide all required support.

“We are disappointed and frustrated that another player on international duty has tested positive – during an international period that is continuing to present huge challenges for the club.

“While FIFA regulations determine that clubs are obliged to release players for international duty, going forward we are sure wider discussions will take place around this hugely important issue. We will monitor these discussions closely.”