Celtic Quick News on News Now
You are at:Home»Latest News»CELTIC DUO HAILED AS ‘MODERN-DAY GREATS’
By CQN Magazine on 19th May 2020 Latest News

The 34-year-old skipper and the Scotland international winger have been at Celtic from the start of the glorious title-winning sequence that matched the achievement of Jock Stein’s legendary team from 1966 to 1974.

Brown and Forrest are now up there with Billy McNeill, Jimmy Johnstone and Bobby Lennox – who all picked up nine successive championships – and the other Lisbon Lions such as Tommy Gemmell, Bobby Murdoch and Bertie Auld who were part of the first UK line-up to conquer Europe when they beat Inter Milan in the Portuguese capital on May 25 1967.

Brown has matched the iconic McNeill as the only Parkhead captain to lead the team to nine successive crowns. And the powerhouse midfielder is showing no signs of slowing down as he now turns his gaze to the magical ten. 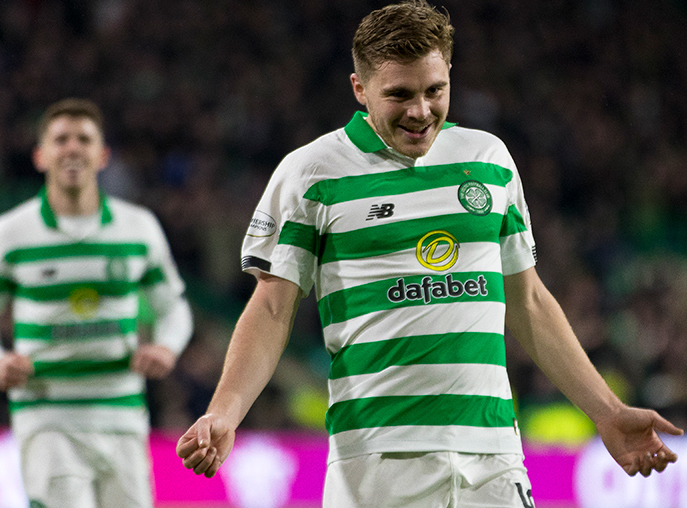 BHOY WONDER…James Forrest is about to be congratulated by Ryan Christie after scoring another goal on the way to nine in a row.

Lennon, speaking on Celtic TV, said: “To sit here, quite rightly and justifiably enjoying the fruits of the season, to have won a ninth league title in a row when everyone wants to knock you off your perch, I’m so happy, in particular for Brown and Forrest, because they’ve been there the whole way through it and that is something very special.

“They’re phenomenal, really. I’ve said it before, but they are two modern-day Celtic greats and they’ll be talked about in years to come, if and when they do decide to hang their boots up.

“Browny is a great leader, on and off the field. He sets a really high bar, even in training, but he sets the bar the highest when the performances come around and when the games come around. Certainly, he’s played a huge part in the success the club’s enjoyed over the years.

“Jamesy, I’m really proud of him because I gave him his debut and now, 10 years on, he’s a nine-in-a-row winner and you look at the achievements he’s had over the last five or six years – Player of the Year, International Player of the Year. He was well on course for scoring 20 goals this season and that, for a winger, is a pretty special return.