CELTIC will part-close Parkhead for the Europa League Group E encounter against Rennes on Thursday night.

The champions have made the decision amid safety concerns over the actions of sections of the home support.

The Hoops were fined £12,900 by UEFA last week after supporters displayed an “illicit banner” and got involved with chants deemed to be obscene during their 2-1 win over Lazio last month.

As a result, they have decided to close rows A to M in the rail seating section of the stadium which holds the club’s fan group the Green Brigade.

Celtic were also fined £10,400 for supporters setting off flares in the 2-0 victory over Cluj in October and hit with another £11,000 penalty for their followers using flares and throwing objects in the play-off second-leg win over AIK in Stockholm in August.

A statement on the club website read: “Celtic has ultimate responsibility for the safety of all our supporters and it is a responsibility which we take very seriously. 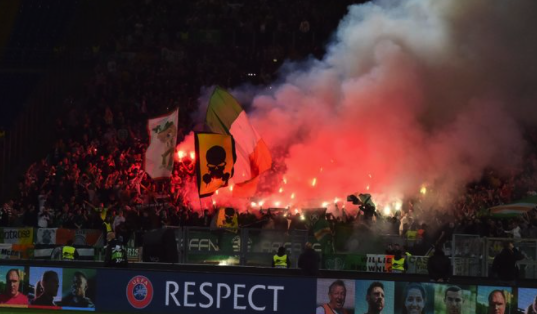 “We need to tackle any behaviour which can compromise the safety of our supporters including the use of pyrotechnics, overcrowding and offensive chanting or banners.

“Following the latest UEFA disciplinary decision we can confirm that there will be a partial closure of the rail seating section at Celtic Park for the forthcoming match against Rennes.

“All those supporters affected will be notified and will receive a refund.

“This decision follows similar significant sanctions being imposed against the club already this season for the use of pyrotechnics during the matches against CFR Cluj and AIK Stockholm.

“The club also faces another UEFA charge for the use of pyrotechnics during the match in Rome recently and this will be heard on 12th December 2019.

“Regrettably, these charges and sanctions continue to damage the club’s reputation and this behaviour continues to threaten supporter safety.

“Indeed, the club engages in regular dialogue with all supporters groups to ensure these are well known and understood.

“We have considered this matter very carefully. It is disappointing that behaviour which is unsafe and which we all know will breach UEFA and club regulations has continued.”

The match against the French side on Thursday will bring down the curtain on the Hoops’ Europa League group campaign that has brought two wins to go with the triumph in Rome to ensure a place in the knock-out stages of the competition next year.

They drew 1-1 with Rennes at the start of the adventure which will be concluded in Romania against Cluj on December 12.