Celtic Quick News on News Now
You are at:Home»Latest News»CELTIC EYE CITY KIDS
By CQN Magazine on 16th January 2016 Latest News
CELTIC have opened talks with Manchester City about taking teenage winger Patrick Roberts on loan for the remainder of the season.
And Hoops boss Ronny Deila is also monitoring his attacking team-mate Bersant Celina.
Roberts, 18, has represented England at Under-16, 17, 18 and 19 level and City gaffer Manuel Pellegrini is eager for the youngster to get first team action.
He made 20 appearances for Fulham in season 2014/15 before moving to the Premier League giants for a fee that could rise to £12million.
Roberts has made only one league appearance in the top side this season when he came on as a substitute for Sergio Aguero in the club’s 4-1 defeat against Spurs at White Hart Lane.
The Hoops, though, will face competition from Bournemouth who are also keen on landing the exciting flanker on a temporary basis.
Norwegian Celina is also on Deila’s radar, but Championship duo Middlesbrough and Derby are in the race, too, for the 19-year-old midfielder who made his debut in last week’s FA Cup win over Norwich City.
Deila was delighted with this displays of central defender Jason Denayer when he arrived on a temporary deal from the Etihad outfit last season.
The Belgian international won Premiership and League Cup medals and was named the Young Player of the Year by the SPFA.
Celtic made a move for him to return during this campaign, but their failure to qualify for the Champions League saw the 20-year-old head for Turkish outfit Galatasaray on a season-long deal.
Meanwhile former Celtic defender Glenn Loovens has agreed a two-and-a-half year extension at Sheffield Wednesday. 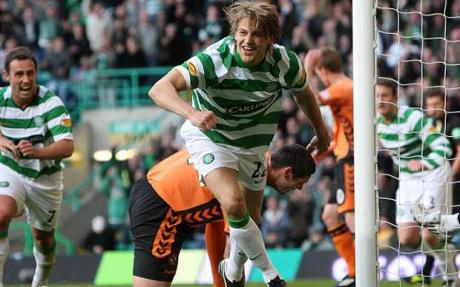 The club captain was due to be out of contract at the end of the season, but is now tied to the Championship side until the end of the 2017-18 campaign.

Loovens joined the Hillsborough outfit on a free transfer in December 2013 and has been a regular in their back four, making 77 appearances in all competitions.

The 32-year-old Dutchman was signed by Gordon Strachan for £2million from Cardiff City in 2008.
He left on a Bosman four years later and joined Spanish side Real Zaragoza, but returned to the UK just over three years ago.

Loovens joins striker Atdhe Nuhiu in committing his long-term future to the Hillsborough club, the Austrian having signed a two-and-a-half year deal on Thursday.