CELTIC will play the winners of the Aberdeen v Rangers replay in the Scottish Cup semi-final next month after tonight’s ballot at Firhill.

The sides drew 1-1 at Pittodrie yesterday and will meet again at Ibrox a week tomorrow for the right to play the holders.

Neil Lennon’s men, of course, cemented their place in this stage following their 2-0 win over Hibs.

The other semi-final will be between Partick Thistle or Hearts, who drew 1-1 this evening,  against Inverness Caley Thistle, who overcame Dundee United 2-1 yesterday.

Gary Caldwell’s Jags came back to earn a replay Craig Levein’s Jambos at Firhill. A header from skipper Christophe Berra gave the visitors the advantage, but Christie Elliott snatched the leveller and the teams will meet again at Tynecastle a week tomorrow.

The Hoops have reached the last four of the national competition with wins over Airdrie, St Johnstone and Hibs, scoring 10 goals with Scott Bain yet to concede a solitary effort.

The run kicked off with a 3-0 victory over League One side Airdrie at Parkhead on January 19 where new Bhoy Timothy Weah netted his first goal for the club after coming on as a substitute. 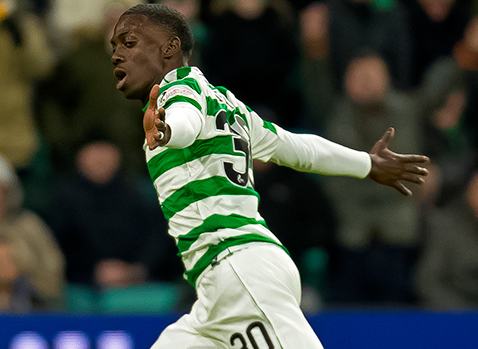 THE CELTIC WEAH…on-loan PSG teenager Timothy Weah celebrates his first goal for the Hoops against Airdrie.

Scott Sinclair had already struck a double to make sure there was no banana skin on this occasion.

Next up were St Johnstone, again in the east end of Glasgow, and this time the English attacker fired in an unstoppable hat-trick as the team strolled to a 5-0 success.

There was also the sight of skipper Scott Brown scoring his first goal in two years with a mighty blast that almost tore a hole in the roof of Zander Clark’s net. James Forrest also got on the scoresheet.

And the Scotland winger struck again at the weekend when the visitors battled to a 2-0 triumph over Hibs at Easter Road. After a scorless stalemate in the first-half, Forrest drifted away from two defenders before rifling the breakthrough strike beyond the helpless Ofir Marciano.

And it was all over when Brown claimed his third goal in recent weeks with a right-foot blast that hurtled into the net with only 15 minutes left for play.

Now it’s back to Hampden and another 90-minute test with all eyes on the prize on May 25 – and, hopefully, the unprecedented treble treble.