Three goals in an electrifying six-minute burst midway through the first-half from Mikael Lustig, Leigh Griffiths and Patrick Roberts wiped out the Red Imps’ one-goal advantage from last week’s shocker in Gibraltar. 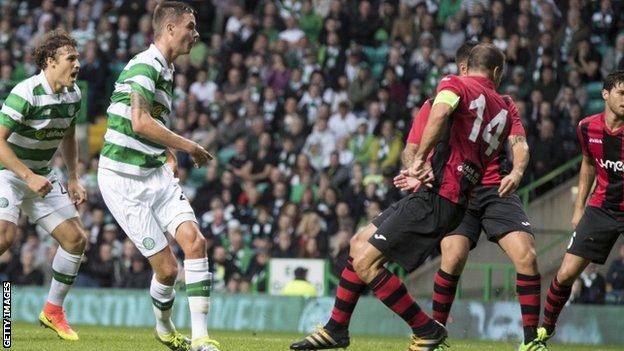 Now the Hoops face last season’s group-stage qualifiers Astana, who were seconds away from crashing out to Lithuania’s Zalgiris Vilnius until a controversial 92nd-minute handball winner.

And that ‘goal’ – which made it 2-1 on aggregate – consigned Brendan Rodgers and his team to another six-hour flight to the other side of Europe.

Celtic, with Neil Lennon in charge, survived a brush with Kazakhstan’s Shakhter Karagandy in the Champions League qualifiers in 2013, emerging with a last-gasp 3-2 aggregate victory.

Astana are likely to prove an even sterner test, however, after taking points from such European powerhouses as Galatasaray, Benfica and Atletico Madrid in last season’s group stage.

Rodgers admitted the trip will pose new problems for his side and said: “‘It’s what is thrown at us. We just need to adjust. We will look to probably fly out on the Monday. The game is on the Wednesday and we just have to prepare ourselves the best we possibly can.

“It’s dry conditions, but we have to find a way to get a performance and a result. It’s another difficult tie for us, but we will be ready for it.”

Celtic were rarely troubled and the heroics of full-time professional goalkeeper Raul Navas prevented them from running up a record score.

Insisting qualification was the primary overriding target, Rodgers also claimed his side could have reached double figures.

He added: “I’m pleased to qualify — that was the objective going into the game. I thought the intensity was outstanding in the first 30 minutes. We scored three and their goalkeeper probably prevented it being double figures.

“The crowd was incredible with a full house and the players really felt that support.”