Brendan Rodgers brought the German right-back to Parkhead from Borussia Dortmund in a temporary deal on the last day of the January transfer deadline in 2019, but the defender failed to make an impression.

When Neil Lennon replaced his fellow-Irishman in the dug-out following the dramatic switch to Leicester City less than a month later one of the first things he did was to reinstate Mikael Lustig to the No.2 position.

Toljan started in the returning manager’s first game against Hearts at Tynecastle, but was withdrawn in the second-half to make way for the ageing Swede. 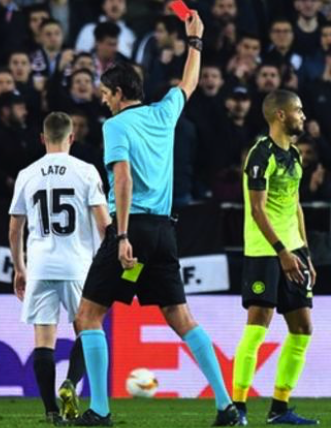 SEEING RED…Jeremy Toljan is dismissed in the 1-0 Europa League loss against Valencia in February 2019.

The adventurous full-back, who was rated in the £6million category, made only 10 starts and four as a substitute before his four-month contract expired.

Toljan, now 27, was returned to his parent club and then loaned out again for the new season to Serie A outfit Sassuolo before the move to Italy was made permanent.

Now former European kings Bayern, managed by Julian Nagelmann, the player’s former boss, are about to bring him back to the German top flight, according to a report in sports media outlet calciomercato.com.

Toljan enjoyed four years in the top team at Hoffenheim – two under Nagelsmann – before he landed a five-year contract at Dortmund 2017, but only made 23 appearances before being offloaded.

Toljan was red-carded in one of Rodgers’ last games in charge of the Hoops when they lost 1-0 to Valencia to exit the Europa League a 3-0 aggregate on February 21.