FORMER Celtic striker Chris Sutton has launched a blistering attack on the SFA – and hinted the football bosses want Rangers to win the Premiership.

The Hoops great, now a media pundit, believes the Ibrox side have escaped big-style in the wake of Alfredo Morelos missing out on any retrospective punishment following THREE separate incidents in Saturday’s game against Brendan Rodgers’ men in Govan.

Sutton said: “Make no mistake, the referee and the SFA, have done the Ibrox club a massive favour by letting Alfredo Morelos off the hook.

“They’ve also made Scottish football look like a stitch up.

“A friend of mine called on Thursday afternoon after the decision was announced and said: ‘I know there are all these conspiracies in Scottish football, but letting Morelos off just makes it looks like the SFA want Rangers to win the league’.

“I had no answer to him. What could I say? That’s exactly what it looks like.

“Face it, this ridiculous non-decision leaves the SFA wide open to accusations of corruption.” 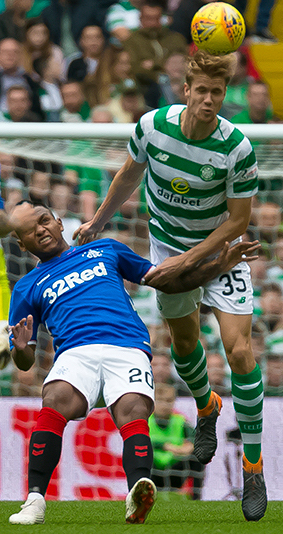 Sutton, Martin O’Neill’s first buy for the Parkhead outfit when he arrived in a £6million deal from Chelsea in July 2000, said: “This is not a case sour grapes. Rangers were the better team, they deserved to win the match and Morelos is the best striker in the league.

“Take nothing away from Rangers, their performance was exceptional.

“But any sane supporter in Scotland will admit Morelos was extremely fortunate to stay on the pitch. Simple as that.

“If they had applied the rules correctly, then El Buffalo would have been on the end of three separate red cards.

“That means three bans, six games, or even more if they pushed him through the disciplinary points totting up threshold.

“But yet again it looks like the SFA have bottled it.

“They know there would have been a huge outcry from Ibrox, but if that’s the reason Beaton has stuck to his guns then it’s either cowardice or corruption, take your pick.”

Sutton, writing in his newspaper column, added: “How the heck can Beaton say he saw the three incidents and didn’t deem any of them to be red cards? It’s unbelievable.

“What are we dealing with here, the Wild West? Is it a case of anything goes?” 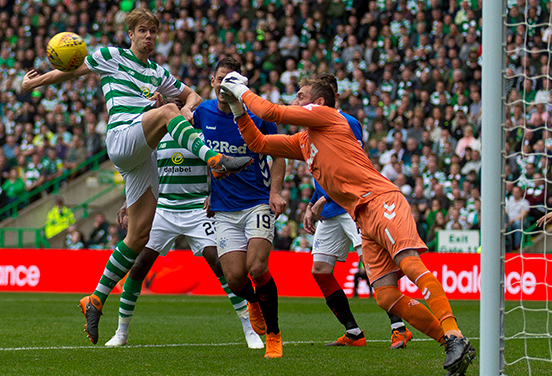 FLASHPOINT…the lead-up to the incident in September when Allan McGregor lashed out at Ajer.

Morelos, who has already been red-carded three times in this campaign, had a clear kick at Hoops skipper Brown in only the third minute with the ball yards away after being headed clear.

He was then involved with midfielder Christie in another off-the-ball incident in full view of the match official who didn’t see fit to administer even a word of caution.

And young right-back Ralston was left writhing in pain in pain on the turf after being stamped upon by Steven Gerrard’s player as they clashed on the touchline.

The Ibrox side also survived a red card for keeper Allan McGregor earlier in the season when he clearly kicked out at the grounded Kristoffer Ajer.

Sutton has the last word: “The buffoonery of the beaks is off the scale and the lot of them should resign in shame.

“The bungling referees, the ex-ref old boys network, the compliance officer – clearly none of them is fit for purpose.

“They should all walk for being completely stupid. “