CELTIC could be guaranteed a Champions League group stage place – if sensational new proposals are rubberstamped.

The Parkhead side would be in position of being among those granted wild card entry for clubs with “great historical importance to football”.

The current format for Europe’s elite competition is set to change and new variations have been proposed.

However, reports emanating from Holland have suggested a new system has been proposed by Europe’s most prestigious clubs which will see four Champions League groups of eight clubs each, meaning extra revenue for every participating team.

THE FINAL BOW…Celtic line up against Valencia in February, the team’s last home European tie this season.

The top four sides will qualify for the knock-out phase, the bottom club would be ‘relegated’ and the remainder going into the Europa League. Matches could also be played on selected weekends.

Crucially, though, clubs with European pedigree would be granted wild cards and that would mean Celtic, the first British club to win the European Cup in Lisbon on May 25, 1967 – would be allocated a place.

But the proposal could also limit the route to the new Champions League to countries outwith the big four of England, Spain, Italy and Germany.

Jaco Swart, the director of the Association of European Professional Football Leagues, has vowed to fight any proposals that would lead to a closed shop to clubs from leagues such as Scotland. 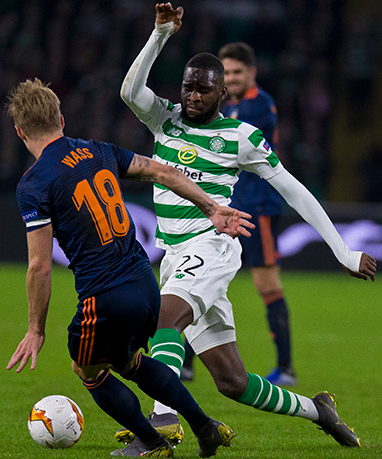 Speaking to the Sun, he said: “We have a meeting with the big clubs at the beginning of May to discuss these proposals.

“National competitions are the engine of the football economy.

“We would, therefore, like to see more financial solidarity from UEFA towards the clubs that do not participate in Europe.

“The rewards in European tournaments are becoming so great that it’s very predictable and attractiveness is decreasing at national level.

“And a closed shop for the Champions League must be prevented at all costs.”