The phenomenal event is on behalf of Celtic FC Foundation and the My Name’5 Doddie Foundation.

The Lions’ Roar Charity Match, will take place at Celtic Park on Friday, May 8, 2020, with a 7pm kick-off, and will see the worlds of football, rugby and entertainment join forces, United Against MND.

The net proceeds of The Lions’ Roar Charity Match will be devoted to fighting MND through two equal beneficiary charities – Celtic FC Foundation (in memory of Jimmy Johnstone) and the My Name’5 Doddie Foundation. 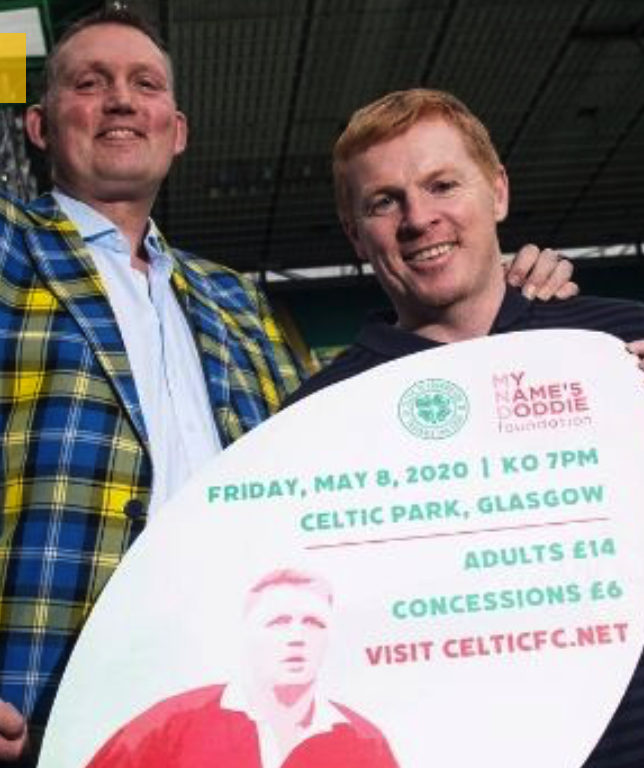 The two Foundations will pull together opposing legends’ squads including a number of familiar faces from both football and rugby, and also a few celebrity supporters.

The passion and commitment of the Celtic support will be largely driven by the loss of the club’s Greatest-Ever Celt, Jimmy Johnstone.

The legendary winger passed away at the age of 61 on March 13, 2006, and the Hoops support, as well as the wider footballing world, mourned his passing. A statue of Jinky now stands outside the front of Celtic Park as a permanent memorial and a reminder to future generations of a wonderful player.

And for rugby fans, there is no greater name than Doddie Weir OBE, who is one of the sport’s most recognisable and much-loved personalities. He earned 61 caps for Scotland during a successful playing career, represented the British and Irish Lions on their successful tour of South Africa in 1997, and won championships with his two club sides, Melrose and Newcastle Falcons.

In June 2017 , Weir revealed he was suffering from MND. From the outset, Doddie has been driven to help fellow-sufferers and seek ways to further research into this, as yet, incurable disease.

In November, 2017, Doddie and his Trustees launched the My Name’5 Doddie Foundation which aims to aid research into the causes of MND, investigate potential cures and to support individuals suffering from MND.

Celtic Chief Executive Peter Lawwell said: “Everyone at Celtic is delighted to be staging and supporting Celtic FC Foundation and the My Name’5 Doddie Foundation in this fantastic event, with two great men in our thoughts.

“Doddie is a true sporting great, a Scotland hero and a man of immense courage. He is someone who is demonstrating such determination and his vision of helping others while facing such adversity is truly inspirational and should be applauded by us all. 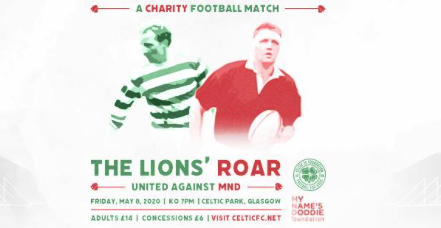 “Likewise, our very own Jimmy Johnstone dealt with his own fight with such dignity and humility. Jimmy will always be remembered as our Greatest Ever Player, but also as a truly great man with such strength of character.

“On May 8, we will honour and celebrate the courage and spirit of two great men and at the same time all join forces to make a positive difference to the lives of so many more.

“We hope that as many people as possible join us in supporting this great event, fans of any team across rugby or football, new visitors to Celtic Park, indeed anyone who wants to be part of a wonderful cause and fantastic tribute to two great sporting icons.

* Tickets for The Lions’ Roar Charity Match are now on sale to Celtic FC season ticket holders, on a first-come-first-served basis, priced at £14 for adults and £6 for concessions. Tickets will go on general sale from 11am on Monday, March 16. They are available to purchase online at www.celticfc.net.