MOUSSA DEMBELE, a famed Celtic Invincible, is celebrating a title success this weekend.

The French international striker, one of Brendan Rodgers’ first buys for the Hoops from Fulham in the summer of 2016, picked up a winner’s medal as Atletico Madrid clinched the La Liga championship.

Dembele joined the Spanish outfit on loan from Lyon at the tun of the year and saw Diego Simeone’s side clinch the crown with a last-day 2-1 victory over Valladolid to edge into pole position, two points ahead of city rivals Real. 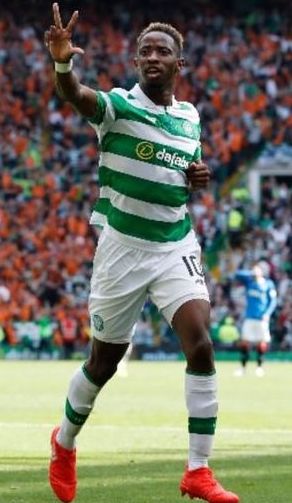 The winning goal came from former Barcelona and Liverpool frontman Luis Suarez who has held onto the main striking position at the club, despite the 24-year-old former Hoops star’s arrival in January.

Dembele is still awaiting his first goal for the Madrid outfit and has been forced into the shadows in recent times with Simeone reluctant to change a winning formula.

His future is still undecided and he is due to return at the end of the month to France to the club who paid £19.8milion to prise him from Parkhead in June 2018. The new Spanish champions have the option to buy in the contract. Dembele’s terms at Lyon still have another two years to run.

The powerhouse attacker, of course, is part of Celtic folklore with his goalscoring performances in the historic 2016/17 season as Rodgers’ team stormed to the domestic silverware clean sweep and went through the term undefeated in all competitions.

He broke through in Glasgow with a spectacular hat-trick in the 5-1 mauling of Mark Warburton’s Ibrox team at Parkhead on September 10 in one of his first appearances in the top side. It was the perfect trio – one with the head, one with the left foot and one with the right.