Celtic Quick News on News Now
You are at:Home»Latest News»CELTIC LEGEND QUITS
By CQN Magazine on 7th May 2022 Latest News

CELTIC’S legendary captain Scott Brown has quit playing at the age of 36.

The former midfield inspiration, who won TWENTY-TWO honours during his medal-laden 14-year Hoops career, has decided to concentrate on management after being linked with hometown club Raith Rovers, as CQN reported.

Brown left Parkhead at the end of his contract for a player-coach role at Aberdeen in June last year, but left in March just nine months into his two-year deal at Pittodrie following the sacking of his friend and former Hibs team-mate Stephen Glass after the club’s Scottish Cup exit at Motherwell the previous month. 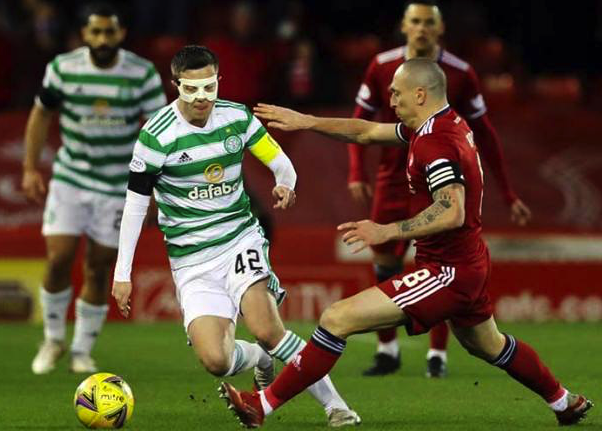 CLASH OF THE CAPTAINS…Scott Brown challenges former team-mate Callum McGregor in Celtic’s 3-2 win over Aberdeen at Pittodrie in February.

The 55 times-capped Scotland international revealed he would “focus on his coaching development” and said he would take some time to consider his next step.

Ange Postecoglou made the point the Hoops icon, who cost a record £4.4million when Gordon Strachan signed him from the Easter Road club in 2007, would always be welcome at Parkhead.

Brown, speaking to the Daily Record, confirmed: “It’s been a very difficult decision to call time on my playing career, but I’ll be 37 next month and I feel the time is right for me to announce that I’m retiring in order to focus fully on becoming a manager.

“It’s the end of one chapter, but the start of a new one and I’m excited about what the future might hold.”