CELTIC have three homes games and two away – all televised LIVE – after the SPFL split and will kick off with a game against Ross County in Dingwall on Sunday, April 24.

The 10-man Hoops, who had Carl Starfelt red-carded, had to battle all the way into stoppage-time to beat Malky Mackay’s Highlanders 2-1 in December with Anthony Ralston scoring a dramatic headed winner.

Liel Abada had opened the scoring before the home side levelled. Ange Postecoglou also took maximum points when the teams met in Glasgow with Cameron Carter-Vickers scoring on his debut in 3-0 victory in September and Giorgos Giakoumakis claimed a hat-trick when the hosts won 4-0 last month. 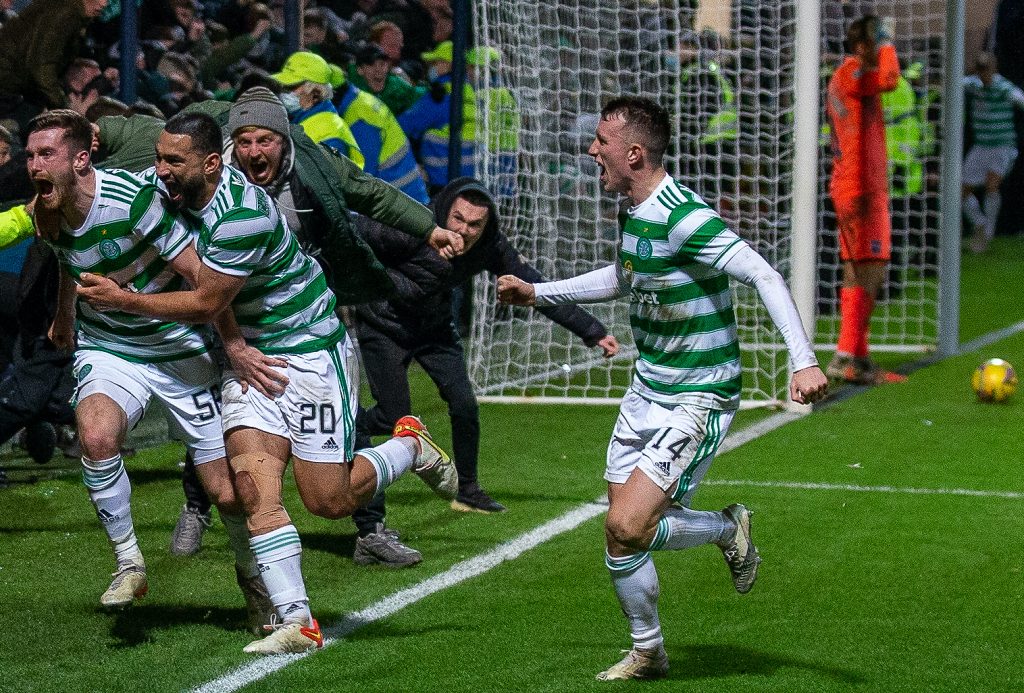 HIGHLAND FLING…Anthony Ralston is hugged by Cameron Carter-Vickers after scoring Celtic’s stoppage-time winner against Ross County in Dingwall in December. David Turnbull is about to join in.

Next up is the fourth derby encounter of the campaign against the Ibrox visitors who were thrashed 3-0 the last time the clubs met at Parkhead in February. Goals from Tom Rogic and Carter-Vickers gave Celtic a 2-1 triumph when they met in Govan recently.

Then there is a game in the east end of Glasgow the following Saturday against Hearts, before a midweek trip to Tannadice on May 11 to face Dundee United.

Postecoglou’s side will bring down the curtain on a phenomenal league campaign against Motherwell at Parkhead on May 14.

The Hoops are currently six points ahead as they head for the home straight.